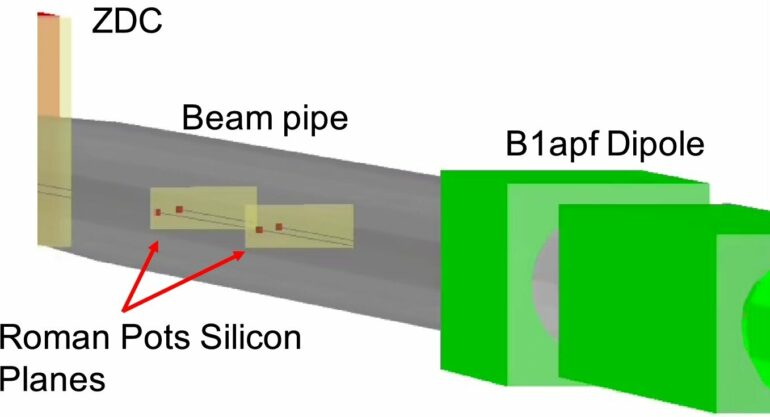 Dien Nguyen and Jennifer Rittenhouse West study two tiny but critically important particles to learn more about our universe. These two particles, neutrons and protons, reside at the center of atoms and make up nearly all of the matter we can see. Their collective name is nucleons.

“We look inside nucleons for much the same reason that we look at the night sky, the stars and galaxies: Because we are curious. Because we want to know what we are made of and how we are made, and how we fit into the universe itself,” said Rittenhouse West, an Electron-Ion Collider Center fellow at the at the U.S. Department of Energy’s Thomas Jefferson National Accelerator Facility and postdoctoral fellow at DOE’s Lawrence Berkeley National Laboratory.

Nguyen and Rittenhouse West recently published a paper in Physics Letters B with 10 of their colleagues, titled “Neutron Spin Structure from e-3He Scattering with Double Spectator Tagging at the Electron-Ion Collider.” Their work describes a method that they hope to use at the future Electron-Ion Collider (EIC) to understand neutron spin, an intrinsic property of particles that describes the particles’ internal angular momenta.

“In addition to studying these things for curiosity, the fact is that nucleon spin must be precisely understood in order to understand other experiments, very high-energy processes, and even atomic physics,” Rittenhouse West said. “The spin of the neutron needs to be pinned down in order to study these other puzzles.”

Neutron spin is complicated. Every neutron is made of three even tinier spinning particles called quarks and a sea of other particles. The spins of the three main “valence” quarks only account for 25 to 30 percent of a neutron’s total spin. Gluons, the particles that hold quarks together in nucleons, and the sea of antiquarks, the antimatter particle of a quark, affect a neutron’s spin as well. The three valence quarks are also moving around each other, and the so-called orbital angular momentum generated by this movement influences total spin, too.

To determine how much each of these players contributes to a neutron’s total spin—which is always 1/2 in particle physics units—researchers probe the internal structure of neutrons by shooting high-energy electrons at them. When an electron penetrates a neutron and collides with one of its quarks, the electron is deflected and can be measured to provide a picture of what’s happening inside the neutron.

However, neutrons don’t exist by themselves for long in nature. Instead, they are found inside the nucleus of atoms, making it much more difficult to measure their properties than protons, which are stable enough to exist alone.

Nguyen, Rittenhouse West, and their team figured out how to better measure a neutron’s properties.

“The unique part of this project is that we were able to model a new way to isolate the neutron,” said Nguyen, a Nathan Isgur Postdoctoral Fellow in Nuclear Experiment at Jefferson Lab and an experimental physicist on the project. “We came up with an idea that uses the features of the new facility to separate the information about the neutron from the nuclei.”

The new facility is the forthcoming EIC, or Electron-Ion Collider, to be built at DOE’s Brookhaven National Laboratory. The EIC will collide beams of different particles to learn more about nucleons, and it will have a special detector region that can detect previously inaccessible particles.

The team came up with an idea for how to isolate new information about the neutron’s spin from experimental data. In the future experiment, the team proposes colliding an electron beam with an ion beam of helium-3, which contains two protons and one neutron in its nucleus. The special detection region will be able to pick up measurements of the two protons from the helium-3 nucleus, a process called double-tagging. This double-tagging of the two protons from a helium-3 nucleus allows the team unhindered access to the now sole remaining particle of the helium-3 nucleus, its neutron.

“This will provide an “effectively free neutron” target that is not readily available in nature or at existing experimental facilities,” Nguyen said.

Construction of the EIC is expected to begin in 2024. When the machine turns on, the team hopes to test their new technique to determine if the two-proton measurement is possible. Once they prove it’s feasible, they’ll assess how good the measurement is.

“This novel technique will give a much more precise measurement to understand the structure of neutron spin,” Nguyen said. “Previous techniques require many different corrections in order to extract the neutron information. Those corrections introduce a large uncertainty.”

“When we make these corrections, which are actually models that have some assumptions baked into them, our error bars get bigger. The more modeling we can avoid, the more the error bars get narrower and narrower for those spin structure observables,” Rittenhouse West said.

The unprecedented capabilities of the EIC will provide opportunities for new measurements like this alternative approach to neutron spin.

“There are puzzles and mysteries that we want to answer, and for the spin structure of the neutron specifically, we can answer them with the Electron-Ion Collider,” Rittenhouse West said.

Richard Milner and Or Hen, professors at Massachusetts Institute of Technology (MIT), as well as Efrain Segarra, doctoral student at MIT, and Mark Baker, principal consultant at Mark D. Baker Physics and Detector Simulations, LLC, rounded out the team.

“That’s how the groups combined to make us stronger,” Nguyen said. “Even though we do something different, when we work on the same project, we help each other. I truly appreciate the great collaboration on this project. It was the work of all of us.”

In total, Nguyen and Rittenhouse West collaborated with four other postdocs, two graduate students, and four senior researchers on this work, meaning the early career physicists outnumbered the more experienced ones.

“The beauty of working with fellow early career people is a serious freedom of thought and of expression. I really don’t care if I say something stupid, the goal is just to understand!” Rittenhouse West said.

But both could turn to the more experienced group members when they were stuck. They also enjoyed teaching and encouraging younger students.

“I think there was a very good diversity of experience level,” Nguyen said. “I really enjoy the mixing of the different generations. In this project, it definitely helped. It’s very dynamic, and each generation supports each other.”

The duo looks forward to continuing their collaboration and growing together.

“Over the next 10 years, we hope to become senior researchers together.” Nguyen said.

Sometime during that window, the EIC will be finished. Once it’s up and running, the team hopes to test their results from this work.

“When the EIC turns on, we will be ready to go. We know what we want to measure experimentally, and we will have more theoretical calculations,” Nguyen said.

From now until then, more early career scientists will have the opportunity to get involved with the EIC.

“It’s an ideal time to be part of the EIC movement—come join us.” Rittenhouse West said