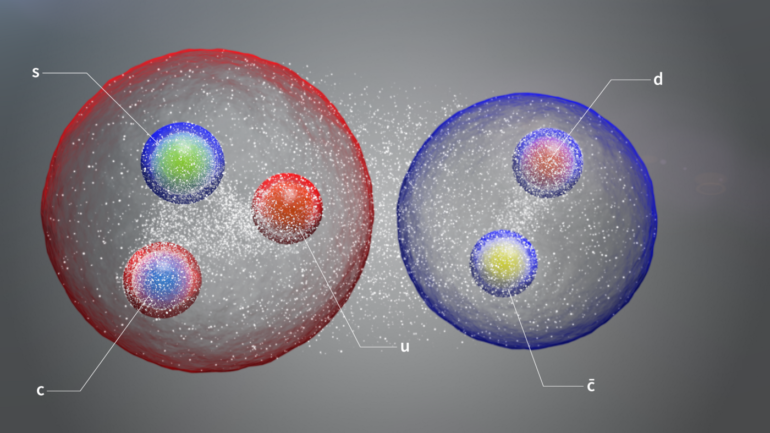 Theorists at the University of Pittsburgh and Swansea University have shown that recent experimental results from the CERN collider give strong evidence for a new form of matter.

The experiment at CERN, site of the world’s highest-energy particle collider, examined a heavy particle called a Lambda b that decays to lighter particles, including the familiar proton and the famed J/psi, discovered in 1974.

In a paper published online today in Physical Review D, physicists Tim Burns of Swansea in Wales and Eric Swanson at Pitt argue that the data can be understood only if a new type of matter exists.

Most of the observable mass of the universe comes from particles called quarks that combine to make the familiar proton and neutron and a bevy of other particles that interact far more strongly than electrons or neutrinos. These strongly interacting particles are known collectively as hadrons, described in Quantum Chromodynamics theory. Even though this theory is nearing its 50th birthday, it remains notoriously difficult to discern its inner workings.

“Quantum Chromodynamics is the problem child of the Standard Model,” Swanson said. “Learning what it says about hadrons requires running the world’s fastest computers for years, making it difficult to answer the dozens of questions this single experiment raises.”

For this reason, doing experiments with hadrons—and correctly interpreting the results—is vital to understanding Quantum Chromodynamics.

Until recently, all hadrons could be understood as combinations of a quark and an antiquark, like the J/psi, or combinations of three quarks, like the proton. In spite of this, it has long been suspected that other quark combinations are possible—what amounts to new forms of matter. Then, in 2004 came the discovery of a particle called the X(3872), which seemed to be a combination of two quarks and two antiquarks. Other candidate novelties have come along since then, although none of them can be definitively identified as exotic new combinations of quarks.

“Sometimes a bump in the data is a wonderful new thing, and sometimes it is just a bump,” Swanson said.

The new work combines the CERN data with other experiments from 2018 and 2019 to arrive at a consistent explanation for all the findings.

“We have a model that explains the data beautifully, and for the first time, incorporates all the experimental constraints,” Burns said. The explanation requires the existence of several new particles that consist of four quarks and one antiquark, called “pentaquarks.” The research also indicates that the pentaquarks are just at the threshold for being observed at other laboratories.

“There is really no other way to interpret the data—pentaquark states must exist,” said Burns. The conclusion raises the possibility that other pentaquarks are possible, and that a whole new class of matter is at the cusp of being discovered.