The invention of a flexible endoscope thinner than a needle 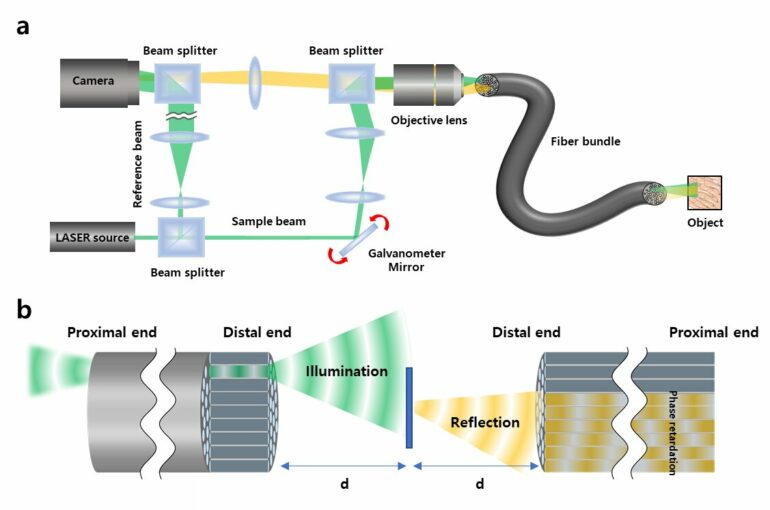 If you are used to getting regular health checkups, you might be familiar with endoscopes. The endoscope is an imaging device consisting of a camera and a light guide attached to a long flexible tube. It is particularly useful for acquiring images of the inside of a human body. For example, stomach and colon endoscopy are widely used for the early detection and diagnosis of diseases such as ulcers and cancers.

In general, an endoscope is manufactured by attaching a camera sensor to the end of a probe or using an optical fiber, which allows for information to be transmitted using light. In the case of an endoscope that uses a camera sensor, the thickness of the probe increases, which makes the endoscopy rather invasive. In the case of an endoscope using an optical fiber bundle, it can be manufactured in a thinner form factor, which minimizes invasiveness and results in much less discomfort to the patients.

However, the downside is that in a conventional fiber-bundle endoscope, it is difficult to perform high-resolution imaging, because the resolution of the obtained image is limited by the size of the individual fiber cores. Much of the image information is also lost due to reflection from the probe tip. Furthermore, in fiber endoscopy, it is often necessary to label the target with fluorescence, especially in biological samples with low reflectivity, due to strong back-reflection noise generated from the tip of the thin probe.

Recently, a research team led by CHOI Wonshik, the Associate Director of the Center for Molecular Spectroscopy and Dynamics (CMSD) within the Institute for Basic Science (IBS), has developed a high-resolution holographic endoscope system. The researchers were able to overcome the previous limitation of fiber optic endoscopy and were able to reconstruct high-resolution images, without attaching a lens or any equipment to the distal end of the fiber bundle.

This feat was accomplished by measuring the holographic images of the light waves that are reflected from the object and captured by the fiber bundle. The researchers first illuminated an object by focusing light onto a single core of a fiber bundle and measured holographic images that were reflected from the object at a certain distance from the optical fiber. In the process of analyzing the holographic images, it was possible to reconstruct the object image with a microscopic resolution by correcting the phase retardation that occurs by each fiber core. Specifically, a unique coherent image optimization algorithm was developed to eliminate fiber-induced phase retardations in both the illumination and detection pathways and reconstruct an object image with a microscopic resolution.

Since the developed endoscope does not attach any equipment to the end of the optical fiber, the diameter of the endoscope probe is 350 μm, which is thinner than the needle used for hypodermic injection. Using this approach, researchers were able to obtain high-resolution images with a spatial resolution of 850 nm, which is far smaller than the core size of the optical fiber bundle.

The researchers went on to test the new Fourier holographic endoscopy system to image the villi structure of mice. It was possible to acquire high contrast image by effectively removing the back-reflection noise of the probe, even in biological samples with very low reflectivity, such as rat villi. In addition, post-processing of the measured holographic information made it possible to reconstruct multi-depth 3D images from a single data set with a depth resolution of 14 μm.

It is believed that the practical application of this new endoscope will greatly improve the way we can image the internal structures of our body in a minimally invasive manner, with little to no discomfort for patients. It will also open the possibility of directly observing cavities as small as microvessels and the smallest airways in the lungs, which was impossible with preexisting technologies. The researchers even suggested the application of their new endoscope can go well beyond the medical field, as it can potentially be useful for industrial inspections of semiconductors and microprocessors.

Provided by
Institute for Basic Science


Citation:
The invention of a flexible endoscope thinner than a needle (2022, September 5)