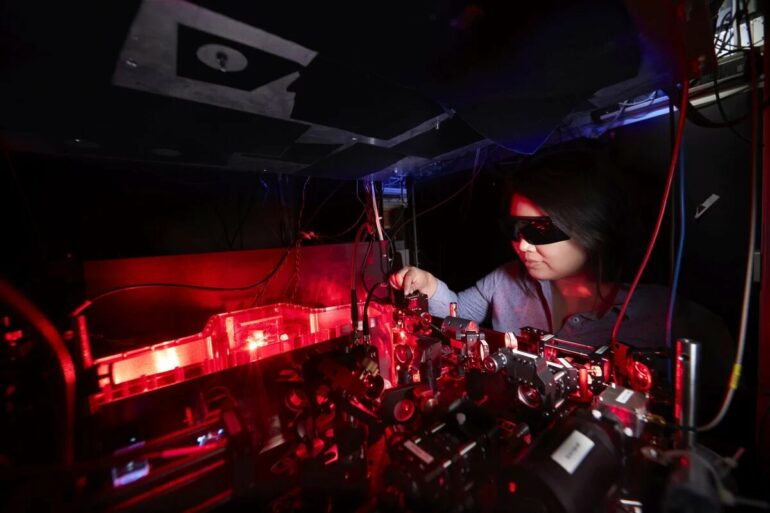 In some materials, there are phases between which a transition is not possible because they are protected by a certain form of symmetry. Physicists refer to these as topological phases. One example of this is the Haldane phase, named after the 2016 Nobel Prize winner in physics Duncan Haldane, which occurs in antiferromagnetic spin-1 chains. A team of researchers at MPQ has now succeeded in realizing this exotic state of matter in a simple system of ultracold atoms. Using a quantum gas microscope, they brought the atomic spins into the desired shape, measured the properties of the system and thus found the hidden internal order typical of the Haldane phase. Their results are published in Nature.

Any matter occurs in different phases, which can merge into one another. An example of this is water, which exists in liquid form, as ice or steam—depending on the external conditions. The different physical phases have the same chemical composition, but a different degree of internal order. If the temperature or pressure changes, for example, the water changes into a different phase at a certain point. However, in some materials, there are phases between which a transition is not possible because they are protected by a certain form of symmetry—a property of the system that thus remains unchanged, for example, during a reflection or rotation. Only by breaking the symmetry is a phase transition possible. Physicists refer to this as topological phases, whose investigation in recent years has led to a deeper understanding of the structure of quantum systems.

To date, such properties have almost only been accessible in theoretical models and calculations or through indirect measurements on solids. But now a team of researchers at the Max Planck Institute of Quantum Optics (MPQ) in Garching has succeeded in generating a special, exemplary type of topological phase in the laboratory and analyzing it experimentally. The scientists in the MPQ Department of Quantum Many-Body Systems, led by Prof Dr. Immanuel Bloch and Dr. Timon Hilker, created a so-called Haldane phase. It is named after the British physicist Duncan Haldane, who described topological phases of quantum systems for the first time and received the Nobel Prize in Physics for it in 2016 together with two other researchers.

Haldane focused his attention, among other things, on the possible existence of a topological phase in a chain of antiferromagnetic spin-1 particles. A spin is a quantum mechanical property of a particles such as electrons or atoms, which can be interpreted in a simple way as the angular momentum of the particle when it rotates around its own axis. In an antiferromagnetic material, the the spins prefer other spins to have a different direction of rotation in their immediate vicinity.

This can lead to a periodic ordering of the spins, which, however, is invisible in spin-1 systems in classical measurements. The theoretical prediction said that there nevertheless is an order, but that it is “hidden.” To detect it, all spins would have to be measured individually and simultaneously—which is not possible in solids. But the researchers at MPQ used artificial materials in which the spins are much further apart. Therein, they produced a spin-1 chain with the characteristics described by Haldane.

The trick with the spin pairs

“Until now, this was difficult to realize,” says Sarah Hirthe. That’s why the Ph.D. candidate at the MPQ, together with her colleague Dominik Bourgund and other members of the Garching team, resorted to a trick: “We created a spin-1 chain in an indirect way by building it up from spins with the value ½, of which we added two each,” explains Bourgund. In this way, cells with integer spin were created that were lined up in a chain.

To realize this special structure, the team used a so-called quantum gas microscope. Such a device can be used, for example, to study the magnetic properties of individual atoms that have previously been arranged in a certain way. The scientists therefore also speak of a quantum simulator, with which matter is artificially constructed from its elementary building blocks. “To do this, we use standing waves of laser light that form a kind of lattice for atoms,” explains Sarah Hirthe. This lattice is then shaped into the desired form with the help of further lasers and countless tiny, movable mirrors.

“For the experiments on the topological Haldane phase, we placed atoms in such a two-dimensional optical lattice,” the physicist reports. “In a vacuum and at a temperature close to absolute zero, the atoms then arranged themselves exactly in the way dictated by light.” The researchers chose a lattice structure that gave the atoms, along with their spins, the shape of a ladder—with two “legs” and “rungs” in between. “The rungs of these so-called Fermi-Hubbard ladders each connected two atomic spins to form unit cells with spin 1,” explains Dominik Bourgund. “In this arrangement, we were using a concept known in theoretical physics as the AKLT model.”

“The highlight of the experiment was that we specially tailored the edges of the system,” says Hirthe: the two legs of the quantum ladder were offset from each other by one atom. In this way, the half-integer spins of the atoms could be combined in a diagonal offset to form unit cells. The consequence of this shape: individual spins without a direct partner “dangled” at both ends of the system—called edge states in technical jargon. “Such spins and their magnetic moments can assume different orientations without any additional energy input,” explains Dominik Bourgund. In this way, they give the system characteristic properties based on the special symmetry—the typical hallmarks of the Haldane phase. For comparison, the Max Planck researchers also created a “trivial” topological phase without edge states.

To analyze the characteristics of the two phases, the scientists measured the magnetization of both the individual spins and the entire system of all atoms along a mental string under the quantum gas microscope. Only in this way it was possible to find the predicted “hidden” internal order. “Our results confirm the expected topological properties of both the overall system and the edge states,” notes Timon Hilker, who leads the project. “This shows: We have made the complex structure accessible for measurements through a simple system.”

With their results, the Max Planck researchers have not only laid the foundation for experimentally verifying theoretical predictions about topological phases. Their new findings could also find practical application in the future—in quantum computers. Their function is based on “qubits,” fundamental computing units in the form of quantum states. The shortcoming in the technical realization so far is their low stability: if the qubits lose their value, the data is also lost. If they could be represented by topological phases, which are quite robust against external interference due to their close connection to a fundamental symmetry, this could significantly simplify computing with a quantum computer.