Towards quantum states of sound 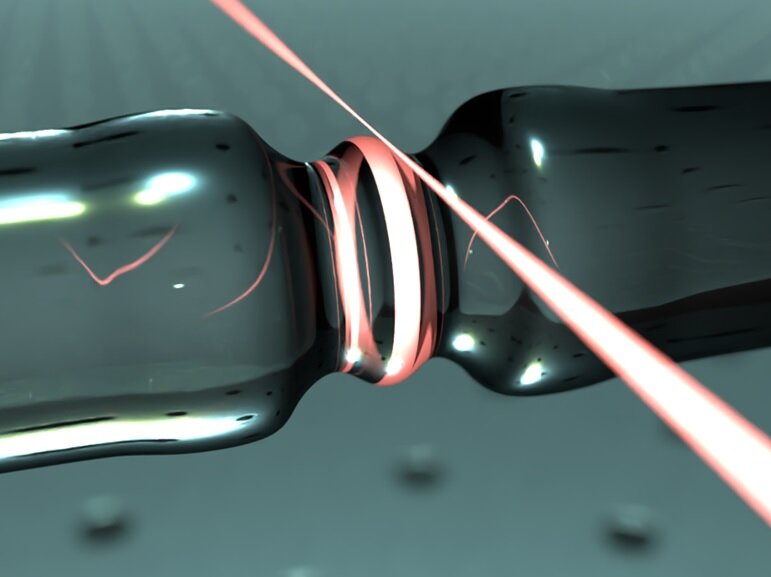 Across the globe, researchers can now generate and control quantum states in a wide variety of different physical systems spanning individual particles of light to complex molecules comprising thousands of atoms. This control is enabling powerful new quantum technologies to be developed, such as quantum computing and quantum communications, and also offers exciting paths to test the foundations of quantum physics. In particular, a key current challenge is how to create quantum states on a larger scale, which will enable the technological potential of quantum physics to be established and the boundary of quantum physics to be explored.

A team of researchers at Imperial College London, together with the University of Oxford, the Niels Bohr Institute, the Max Planck Institute for the Science of Light, and Australian National University have generated and observed non-Gaussian states of high-frequency sound waves comprising more than a trillion atoms. More specifically, the team transform a randomly fluctuating sound field in thermal equilibrium to a pattern thrumming with a more specific magnitude.

This research makes important strides towards generating more macroscopic quantum states that will enable future quantum internet components to be developed and the limits of quantum mechanics itself to be tested. The details of the team’s research are published today in the journal Physical Review Letters.

“To perform this research we confine laser light to circulate inside a micro-scale resonator. Impressively, the light can circulate up to a million times around the edge of this tiny structure in what’s called a whispering-gallery mode,” explains co-first author of the project John Price from Imperial.

“As the light circulates, it interacts with high-frequency sound waves, and we can use the laser light to both generate and characterize interesting states of the acoustic field,” continues co-first author Andreas Svela from Imperial.

“Then, when we observe a single photon that has been created by this light-sound interaction, the detection event gives us the signal that we’ve created our target state,” describes co-first author Lars Freisem from Imperial.

When a single photon is detected it means that a single phonon—a quantum of sound energy—has been subtracted from the initial state of the acoustic field. The team has explored single-phonon addition and subtraction previously to observe a counterintuitive doubling of the average number of sound quanta, and the present work makes a significant advancement by precisely characterizing the fluctuations of the sound wave generated and observing the resulting non-Gaussian pattern.

“Generating non-Gaussian quantum states is important for research in quantum information and the foundations of physics, and excitingly, this research brings us closer to generating such states at a macroscopic scale using sound fields,” says co-first author Georg Enzian, now pursuing research at the Niels Bohr Institute, Copenhagen.

“Future work using this approach offers a practical route to coherently store and retrieve quantum information. That is, make a quantum RAM for a quantum computer. Moreover, this type of research can shed much needed light on the different mechanisms that cause fragile quantum phenomena to decay and become classical,” highlights Imperial’s Quantum Measurement Lab principal investigator Michael Vanner.