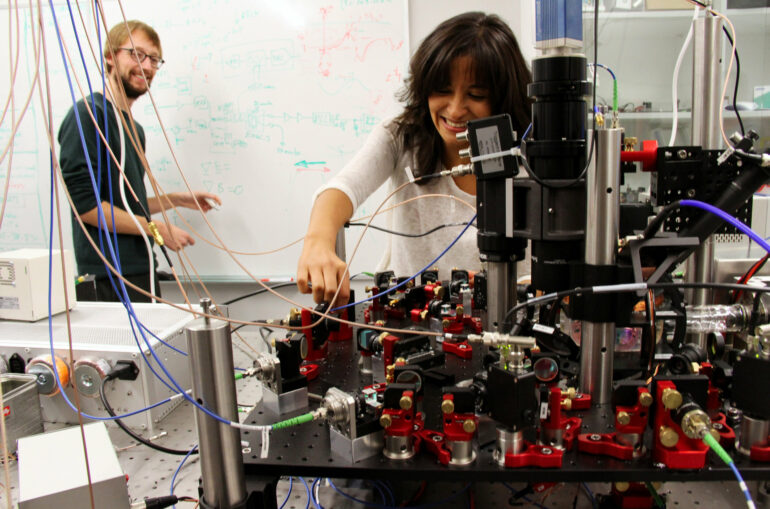 Magnetometers measure the direction, strength or relative changes of magnetic fields, at a specific point in space and time. Employed in many research areas, magnetometers can help doctors to see the brain through medical imaging, or archaeologists to reveal underground treasures without excavating the ground.

Some magnetic fields of great interest, for example those produced by the brain, are extraordinarily weak, a billion times weaker than the field of the Earth, and therefore, extremely sensitive magnetometers are required to detect these weak fields. Many exotic technologies have been invented for this purpose, including superconducting devices and laser-probed atomic vapors. Even the impurities that give some diamonds their color have been used as magnetic sensors. Until now, however, the sensitivity of all of these technologies has stalled at about the same level, meaning that some magnetic signals were simply too faint to detect.

Physics describes this limitation with a quantity called the energy resolution per bandwidth, written ER, a number that combines the spatial resolution, the duration of the measurement, and the size of the sensed area. In about 1980, superconducting magnetic sensors reached the level ER = ħ and since then, no sensor has been able to do better (ħ, pronounced “h bar,” is the fundamental Planck’s constant, also called the quantum of action).

In a study published in PNAS, ICFO researchers Silvana Palacios, Pau Gómez, Simon Coop and Chiara Mazzinghi, led by ICREA Prof. Morgan Mitchell, in collaboration with Roberto Zamora from Aalto University, report a novel magnetometer that for the first time achieves an energy resolution per energy bandwidth that goes far beyond this limit.

In the study, the team used a single-domain Bose-Einstein condensate to create this exotic sensor. This condensate was made of rubidium atoms, cooled to nano-Kelvin temperatures by evaporative cooling in a near-perfect vacuum, and held against gravity by an optical trap. At these ultracold temperatures, the atoms form a magnetic superfluid that responds to magnetic fields in the same way as an ordinary compass needle, but can reorient itself with zero friction or viscosity. Because of this, a truly tiny magnetic field can cause the condensate to reorient, making the tiny field detectable. The researchers showed that their Bose condensate magnetometer has achieves an energy resolution per bandwidth of ER= 0.075 ħ, 17 times better than any previous technology.

With these results, the team confirms that their sensor is capable of detecting previously undetectable fields. This sensitivity could be improved further with a better readout technique, or by using Bose-Einstein condensates made of other atoms. The Bose-Einstein condensate magnetometer may be directly useful in studying the physical properties of materials and in hunting for the dark matter of the Universe.

Most importantly, the finding shows that ħ is not an unpassable limit, and this opens the door to other extremely-sensitive magnetometers for many applications. This breakthrough is interesting for neuroscience and biomedicine, where detection of extremely weak, brief and localized magnetic fields could enable the study of new aspects of brain function.