Protein commonly screened for in pregnancy is linked to gestational diabetes 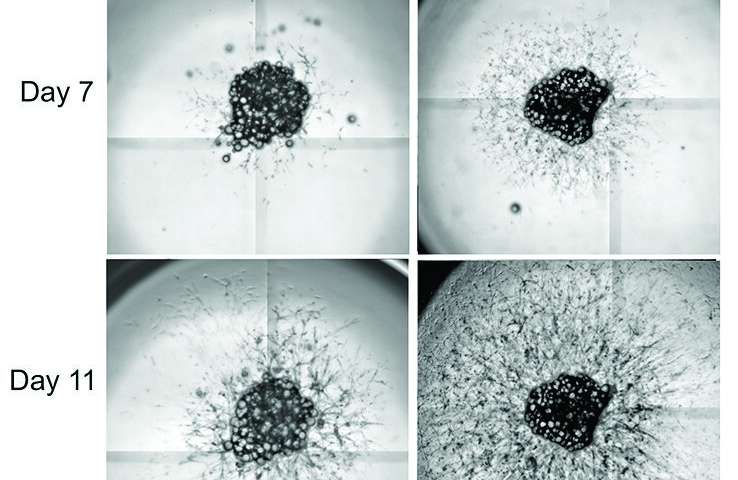 Laboratory research and analysis of epidemiological data by Silvia Corvera, MD, and Tiffany Moore Simas, MD, MPH, MEd, and colleagues show that low levels of a protein commonly seen in screening tests for chromosomal disorders during the first trimester of pregnancy is associated with adipose tissue remodeling, glucose resistance and gestational diabetes mellitus in pregnant women. The study, published in Science Translational Medicine, outlines a new role for pregnancy-associated plasma protein A, known as PAPPA, in gestational diabetes, with translational potential as both a diagnostic tool and therapeutic target.

“We currently evaluate women for gestational diabetes at 24 to 28 weeks of pregnancy, so there’s only a short window of time when we can intervene clinically,” said Dr. Moore Simas, chair and professor of obstetrics & gynecology. “If there was an opportunity to intervene earlier during pregnancy, we have a greater opportunity to improve outcomes.”

Dr. Corvera, the Endowed Chair in Diabetes Research and professor of molecular medicine, added, “Gestational diabetes is a huge health problem not just for mothers, but also for children, because we know these metabolic changes can be passed on to the next generation. Children born from mothers with gestational diabetes are at higher risk for metabolic diseases and type 2 diabetes as they get older.”

Gestational diabetes mellitus is one of the most common complications of pregnancy, impacting as many as 5 to 9 percent of all pregnancies in the U.S. Women with gestational diabetes are unable to use insulin effectively. Glucose builds up in the blood instead of being absorbed by the cells, causing hyperglycemia. Unlike type 1 diabetes, which is caused when the body does not make enough insulin, gestational diabetes results in insulin being less effective at removing glucose from the blood, a condition referred to as insulin resistance.

During pregnancy, a women’s physiology changes to adapt to maternal and fetal nutritional needs, including a reduction in insulin sensitivity that allows for the enhanced glucose availability for the fetus. Likewise, healthy expansion and accumulation of adipose tissue is a normal physiological change necessary to maintain proper nutrient levels for both mother and fetus. Healthy adipose tissue is also important for metabolism and glucose homeostasis. It keeps fat away from other organs, such as the heart and liver, where it can accumulate and cause disease.

Moore Simas, a practicing OB/GYN, often saw these physiological changes firsthand. “One of the things you notice when performing a C-section is that the appearance of the adipose tissues varies greatly from person to person,” said Moore Simas. “These are observable differences in the internal adipose tissue around organs that didn’t seem to necessarily correspond to the mother’s weight.”

Moore Simas mentioned these observations to Corvera, who studies the molecular mechanisms of adipose tissue and diabetes. The two then began working together to try to unravel the underlying molecular changes related to adipose tissue during pregnancy.

“Here was an opportunity to study how fat tissue differs between pregnant and obese women,” said Corvera. “Were there differences that could help us understand how healthy adipose tissue develops vs. unhealthy tissue?”

Among the findings was the elevated presence of Insulin-like Growth Factor-Binding Protein 5 (IGFBP5) in fat from pregnant women. IGFBP5 traps another protein, Insulin-like Growth Factor-1 (IGF-1), which is necessary for cell proliferation and tissue growth. Corvera and Moore Simas thought that the high levels of IGFBP5 in adipose tissue may be connected to a well-known protein, PAPPA. It has been known for years that pregnant women produce PAPPA, which is not normally found circulating in the blood. This protein, made by the placenta, continues to rise until the end of pregnancy and disappears once the placenta has been delivered. Though low levels of PAPPA have been used to screen for Down syndrome and other chromosomal disorders, its precise biological function is not well understood.

Working in human cells as well as mouse knock out models, which do not express PAPPA, Corvera found that the PAPPA protein was cleaving IGFBP5. This cleavage allowed IGF-1 to be free to act on cells of adipose tissue and make healthy adipose tissue during pregnancy. Active throughout life but most active during puberty, IGF-1 is normally sequestered unless it binds to an insulin growth factor binding protein. Once bound, it works in conjunction with growth hormones in the development of new tissue. This is one reason its level rises during the growth spurts associated with puberty.

PAPPA levels are normally screened for in the first trimester of pregnancy because of its correlation to chromosome disorders. The availability of these biological samples allowed Moore Simas and her team to review the medical records of 6,361 pregnant women to analyze levels of PAPPA in the first trimester and compare them with blood glucose levels later in pregnancy. She found that lower levels of PAPPA were correlated to increased insulin resistance and gestational diabetes later in pregnancy.

These results support the hypothesis that increased levels of PAPPA and IGFBP5 in pregnant women allow IGF-1 to work, so that healthy adipose tissue can be produced. By contrast, lower levels of PAPPA, which correlate with excessive insulin resistance, don’t promote healthy adipose tissue, leading to excessive insulin resistance, increased blood glucose levels and gestational diabetes in pregnant women.

“It’s as though the placenta is telling the adipose tissue what to do, through expression of PAPPA,” said Corvera.

The next step for Moore Simas and Corvera is to record PAPPA and glucose levels at various points in pregnancy to more accurately pinpoint how and when PAPPA is triggering physiological changes during pregnancy. They would also like to see if PAPPA levels can be used to predict blood glucose levels, insulin resistance and gestational diabetes before the presentation of clinical symptoms.

Why do hammerhead sharks have hammer-shaped heads?

“Beyond the diagnostic and therapeutic potential of these findings, this is a new pathway involved with gestational diabetes that we’ve identified,” said Moore Simas. “There’s a lot more to understand about this novel mechanism and how it works.”

Corvera said, “In pregnancy, the PAPPA protein is important for the development of healthy adipose tissue. Although very large amounts of PAPPA are made by the placenta during human pregnancy, it is possible that it may play a role outside pregnancy, as small amounts of PAPPA are also made in other tissues. In this way the PAPPA protein and the IGF-1 signaling pathway could play a role in the healthy development of adipose tissue outside of pregnancy and be relevant for other metabolic diseases. This is something we’re eager to explore.”