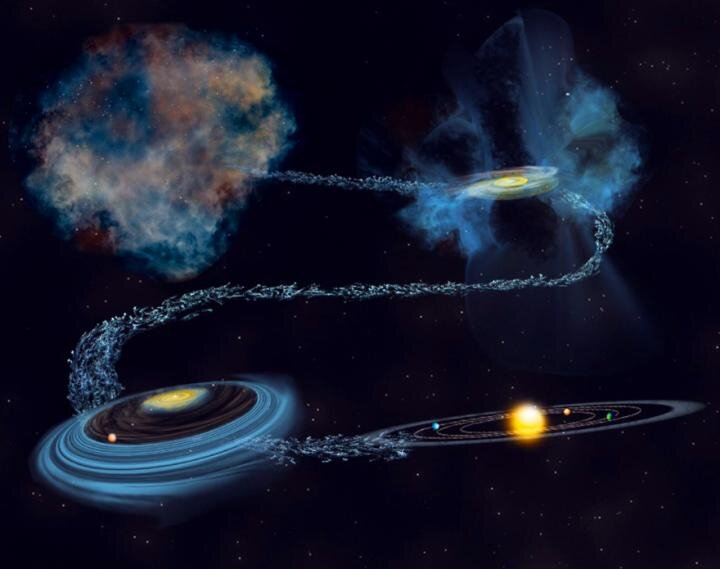 A team of international researchers went back to the formation of the solar system 4.6 billion years ago to gain new insights into the cosmic origin of the heaviest elements on the period-ic table.

Heavy elements we encounter in our everyday life, like iron and silver, did not exist at the beginning of the universe, 13.7 billion years ago. They were created in time through nuclear reactions called nucleosynthesis that combined atoms together. In particular, iodine, gold, platinum, uranium, plutonium, and curium, some of the heaviest elements, were created by a specific type of nucleosynthesis called the rapid neutron capture process, or r process.

The question of which astronomical events can produce the heaviest elements has been a mystery for decades. Today, it is thought that the r process can occur during violent collisions between two neutron stars, between a neutron star and a black hole, or during rare explosions following the death of massive stars. Such highly energetic events occur very rarely in the universe. When they do, neutrons are incorporated in the nucleus of atoms, then converted into protons. Since elements in the periodic table are defined by the number of protons in their nucleus, the r process builds up heavier nuclei as more neutrons are captured.

Some of the nuclei produced by the r process are radioactive and take millions of years to decay into stable nuclei. Iodine-129 and curium-247 are two of such nuclei that were pro-duced before the formation of the sun. They were incorporated into solids that eventually fell on the earth’s surface as meteorites. Inside these meteorites, the radioactive decay generat-ed an excess of stable nuclei. Today, this excess can be measured in laboratories in order to figure out the amount of iodine-129 and curium-247 that were present in the solar system just before its formation.

Why are these two r-process nuclei are so special? They have a peculiar property in com-mon: they decay at almost exactly the same rate. In other words, the ratio between iodine-129 and curium-247 has not changed since their creation, billions of years ago.

“This is an amazing coincidence, particularly given that these nuclei are two of only five ra-dioactive r-process nuclei that can be measured in meteorites,” says Benoit Co?te? from the Konkoly Observatory, the leader of the study. “With the iodine-129 to curium-247 ratio being frozen in time, like a prehistoric fossil, we can have a direct look into the last wave of heavy element production that built up the composition of the solar system, and everything within it.”

Iodine, with its 53 protons, is more easily created than curium with its 96 protons. This is because it takes more neutron capture reactions to reach curium’s higher number of protons. As a consequence, the iodine-129 to curium-247 ratio highly depends on the amount of neutrons that were available during their creation.

The team calculated the iodine-129 to curium-247 ratios synthesized by collisions between neutron stars and black holes to find the right set of conditions that reproduce the composition of meteorites. They concluded that the amount of neutrons available during the last r-process event before the birth of the solar system could not be too high. Otherwise, too much curium would have been created relative to iodine. This implies that very neutron-rich sources, such as the matter ripped off the surface of a neutron star during a collision, likely did not play an important role.

So what created these r-process nuclei? While the researchers could provide new and insightful information regarding how they were made, they could not pin down the nature of the astronomical object that created them. This is because nucleosynthesis models are based on uncertain nuclear properties, and it is still unclear how to link neutron availability to specific astronomical objects such as massive star explosions and colliding neutron stars.

“But the ability of the iodine-129 to curium-247 ratio to peer more directly into the fundamental nature of heavy element nucleosynthesis is an exciting prospect for the future,” said Nicole Vassh from the University of Notre Dame, coauthor of the study.

With this new diagnostic tool, advances in the fidelity of astrophysical simulations and in the understanding of nuclear properties could reveal which astronomical objects created the heaviest elements of the solar system.

In Apps and WebComputer science
on 23 January 20211 min read

“Studies like this are only possible when you bring together a multidisciplinary team, where each collaborator contributes to a distinct piece of the puzzle. The JINA-CEE 2019 Frontiers meeting provided the ideal environment to formalize the collaboration that led to the current result,” Côté said.

Potassium nucleus loses some of its magic


Citation:
Radioactivity in meteorites sheds light on origin of heaviest elements in our solar system (2021, February 26)
retrieved 26 February 2021
from https://phys.org/news/2021-02-radioactivity-meteorites-heaviest-elements-solar.html