Reef-building corals and microscopic algae within their cells evolve together 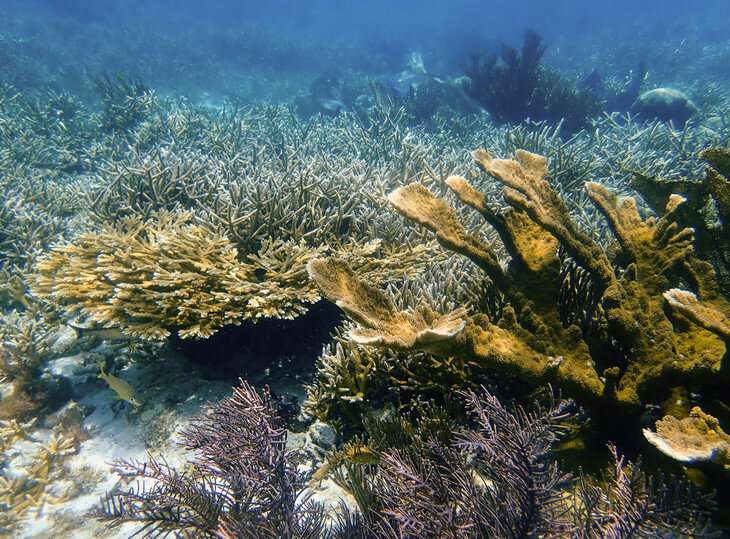 The microscopic algae that live inside and provide nutrients to their reef-building coral hosts may be evolving in tandem with the corals they inhabit, so each partner is fine-tuned to meet one another’s needs. A new study by Penn State biologists reveals that genetic differences within a species of these microalgal symbionts correspond to the coral species they inhabit, a discovery that could have implications for the conservation of these endangered corals.

“Acroporid corals are some of the primary reef-building species in the Caribbean, providing protection to coastlines and habitat for economically important species,” said Iliana Baums, professor of biology at Penn State and leader of the research team. “However, these corals are critically endangered due to warming waters, pollution, and other human-induced changes, and their survival is in part tied to the symbionts that live inside them. Understanding the relationships between the coral and their symbionts may help us improve conservation efforts.”

Reef-building corals such as Acroporids obtain nutrients from the microalgae symbionts that live inside their cells. The research team compared genetic differences among members of the symbiont species Symbiodinium ‘fitti’ collected from either elkhorn coral (Acropora palmata), the closely related staghorn coral (Acropora cervicornis), or the hybrid that results when the two species breed, called fused staghorn coral. The researchers collected symbiont samples from each coral species in several locations spanning the Caribbean Sea. Their results appear online in the journal Molecular Ecology.

“The genetic differences we saw within the symbiont were primarily explained by the species of host we collected them from,” said Hannah Reich, a graduate student at Penn State at the time of the research and currently a postdoctoral researcher at the University of Rhode Island. “Each coral species is a unique micro-habitat for their symbionts. For example, the limestone skeletons of the two coral species are distinct and reflect sunlight differently. So the symbionts must adapt to the conditions created by each host to best harness solar energy and convert it to food. They then provide this nourishment to their hosts which rely on it for most of their nutrition.”

The researchers said they suspect that each of the coral species has co-evolved with a subset of the strains of S. ‘fitti.” Over generations, they have formed more specialized relationships. This specialization even occurred in the natural coral hybrid that has a relatively recent origin.

“Some of the genetic differences we observed among S. ‘fitti’ strains were in genes predicted to cause downstream effects on the symbiont’s metabolism and physiology,” said Sheila Kitchen, a postdoctoral researcher at Penn State at the time of the research and currently a postdoctoral researcher at the California Institute of Technology. “These changes may enable the symbiont to adapt to the unique metabolic and nutritional demands imposed by each host’s microenvironment.”

The fidelity between the coral species and their symbionts could be reinforced if symbionts are selective about which coral species they colonize, and/or if the coral hosts are selective about which symbiont strain is allowed to remain in their cells, though the mechanisms of partner selectivity remain unclear. The researchers note that environmental factors may also play a role in genetic differences among the symbiont strains, for example by influencing the symbionts before they have colonized a coral or indirectly by influencing the microenvironment inside the coral host.

Genomic data ‘catches corals in the act’ of speciation and adaptation

Audi e-tron Sportback: its digital mirrors will prepare you for the future of driving


Citation:
Reef-building corals and microscopic algae within their cells evolve together (2021, May 28)
retrieved 31 May 2021
from https://phys.org/news/2021-05-reef-building-corals-microscopic-algae-cells.html