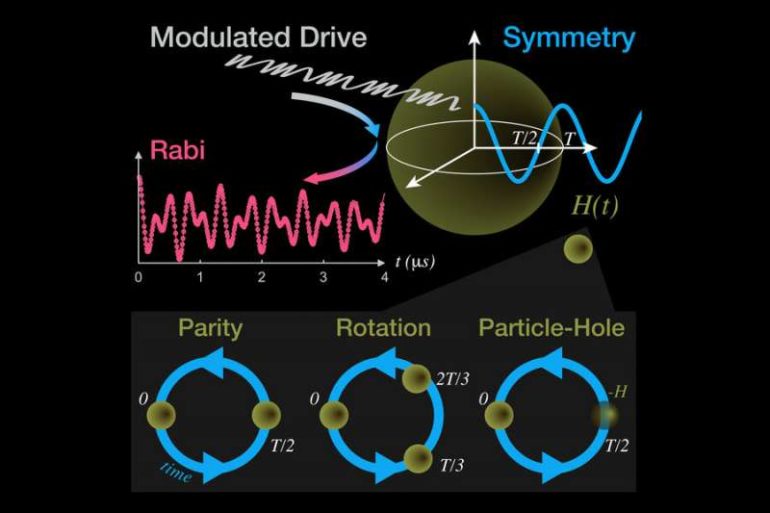 Physicists and engineers have long been interested in creating new forms of matter, those not typically found in nature. Such materials might find use someday in, for example, novel computer chips. Beyond applications, they also reveal elusive insights about the fundamental workings of the universe. Recent work at MIT both created and characterized new quantum systems demonstrating dynamical symmetry—particular kinds of behavior that repeat periodically, like a shape folded and reflected through time.

“There are two problems we needed to solve,” says Changhao Li, a graduate student in the lab of Paola Cappellaro, a professor of nuclear science and engineering. Li published the work recently in Physical Review Letters, together with Cappellaro and fellow graduate student Guoqing Wang. “The first problem was that we needed to engineer such a system. And second, how do we characterize it? How do we observe this symmetry?”

Concretely, the quantum system consisted of a diamond crystal about a millimeter across. The crystal contains many imperfections caused by a nitrogen atom next to a gap in the lattice—a so-called nitrogen-vacancy center. Just like an electron, each center has a quantum property called a spin, with two discrete energy levels. Because the system is a quantum system, the spins can be found not only in one of the levels, but also in a combination of both energy levels, like Schrodinger’s theoretical cat, which can be both alive and dead at the same time.

The energy level of the system is defined by its Hamiltonian, whose periodic time dependence the researchers engineered via microwave control. The system was said to have dynamical symmetry if its Hamiltonian was the same not only after every time period t but also after, for example, every t/2 or t/3, like folding a piece of paper in half or in thirds so that no part sticks out. Georg Engelhardt, a postdoc at the Beijing Computational Science Research, who was not involved in this work but whose own theoretical work served as a foundation, likens the symmetry to guitar harmonics, in which a string might vibrate at both 100 hertz and 50 Hz.

To induce and observe such dynamical symmetry, the MIT team first initialized the system using a laser pulse. Then they directed various selected frequencies of microwave radiation at it and let it evolve, allowing it to absorb and emit the energy. “What’s amazing is that when you add such driving, it can exhibit some very fancy phenomena,” Li says. “It will have some periodic shake.” Finally, they shot another laser pulse at it and measured the visible light that it fluoresced, in order to measure its state. The measurement was only a snapshot, so they repeated the experiment many times to piece together a kind of flip book that characterized its behavior across time.

“What is very impressive is that they can show that they have this incredible control over the quantum system,” Engelhardt says. “It’s quite easy to solve the equation, but realizing this in an experiment is quite difficult.”

Critically, the researchers observed that the dynamically symmetry of the Hamiltonian—the harmonics of the system’s energy level—dictated which transitions could occur between one state and another. “And the novelty of this work,” Wang says, “is also that we introduce a tool that can be used to characterize any quantum information platform, not just nitrogen-vacancy centers in diamonds. It’s broadly applicable.” Li notes that their technique is simpler than previous methods, those that require constant laser pulses to drive and measure the system’s periodic movement.

One engineering application is in quantum computers, systems that manipulate qubits, bits that can be not only 0 or 1, but a combination of 0 and 1. A diamond’s spin can encode one qubit in its two energy levels.

Qubits are delicate: they easily break down into simple bit, a 1 or a 0. Or the qubit might become the wrong combination of 0 and 1. “These tools for measuring dynamical symmetries,” Engelhardt says, “can be used to as a sanity check that your experiment is tuned correctly—and with a very high precision.” He notes the problem of outside perturbations in quantum computers, which he likens to a de-tuned guitar. By tuning the tension of the strings—adjusting the microwave radiation—such that the harmonics match some theoretical symmetry requirements, one can be sure that the experiment is perfectly calibrated.

The MIT team already has their sights set on extensions to this work. “The next step is to apply our method to more complex systems and study more interesting physics,” Li says. They aim for more than two energy levels—three, or 10, or more. With more energy levels they can represent more qubits. “When you have more qubits, you have more complex symmetries,” Li says. “And you can characterize them using our method here.”