Researchers discover new particle in the blood of septic patients 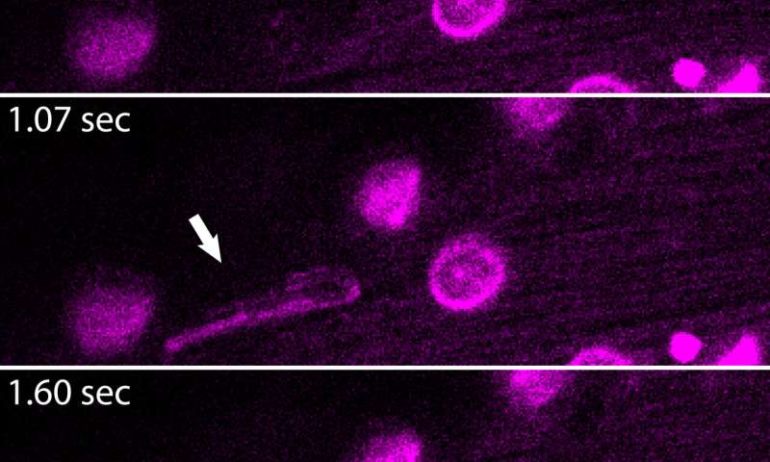 Researchers at La Jolla Institute for Immunology (LJI) have found that people with sepsis have never-before-seen particles in their blood. The scientists are the first to show that these particles, called elongated neutrophil-derived structures (ENDS), break off of immune cells and change their shape as they course through the body.

“We actually found a new particle in the human body that had never been described before,” explains LJI Instructor Alex Marki, M.D., who served as first author of the study. “That’s not something that happens every day.”

The research, published December 4, 2020 in the Journal of Experimental Medicine shows the importance of understanding how immune cells change over the course of a disease.

“ENDS are not normal—they are not detectable in healthy people or mice,” says LJI Professor Klaus Ley, M.D., who served as senior author of the study. “But ENDS are very high in sepsis, and I would not be surprised if they were high in other inflammatory diseases.”

The beginning of the ENDS

The discovery of ENDS started with an odd observation.

Marki was studying neutrophils, a kind of immune cell that moves through the bloodstream and slips into tissues to fight infections. At the time, he was studying living mice to confirm the presence of tubes called tethers. These tethers are attached to neutrophils as they roll on the blood vessel wall.

During these experiments Marki noticed long, thin objects of neutrophil origin sticking to the vessel wall. Since no such structure was described in the scientific literature, the team had to come up with a name for them. The initial lab slang name “sausages” was eventually replaced by the elongated neutrophil-derived structures or ENDS.

Desperate for learning more about these new objects, the LJI team developed a series of new techniques to study how ENDS form and degrade—and to detect them in human and mouse blood plasma.

Thanks to sophisticated imaging techniques, the LJI team figured out that tethers become ENDS. As the neutrophils flop and roll along, their tethers get longer and longer. Eventually the tethers become too thin—just 150 nanometers (around 1/500th the width of a human hair). Then they break in the middle. Part of the tether stays with the neutrophil, but the broken fragment flies away in the bloodstream, off to form an ENDS.

The researchers showed that these ENDS curl against the vessel wall until they get a rounded shape. It’s likely that the ENDS stay intact for a while, but not for long. Without any life-sustaining organelles inside, the ENDS begin to die. In fact, the researchers found that the ENDS secrete tell-tale signaling molecules that promote inflammation.

Compared with healthy subjects, the researchers showed that ENDS are around 100-fold more detectable in septic patients.

What this means for sepsis

Sepsis can occur when the immune system overreacts to an infection by flooding the body with dangerous chemicals. Instead of just fighting the infection, these chemicals trigger organ damage as they course through the bloodstream. The mortality rate for septic “shock” is 30 percent.

“Once you’re in the hospital, sepsis is the most common cause of death,” Ley says.

Ley and Marki are still not sure why ENDS form in patients with sepsis. To learn more, Marki hopes to collect more patient samples to track ENDS formation and frequency over time. “I’d like to study blood from several time points from each patient—to see the dynamics of how ENDS change,” he says.

Ley says it is theoretically possible that ENDS could one day serve as a biomarker for early sepsis detection, but it is currently impossible to detect them in a clinical setting. “Right now, the assay is not practical because it takes specialized instrumentation,” says Ley.

Rather than serving as a diagnostic, Ley thinks studying ENDS could reveal secrets to how the immune system evolved. He’s curious to learn how the process to form ENDS evolved—and why.

“Neutrophils are very soft cells that can deform to reach almost any place in the body,” says Ley. “So one hypothesis I have is that ENDS might be the price you pay for having such a soft cell—that if you pull too hard, it falls apart.”