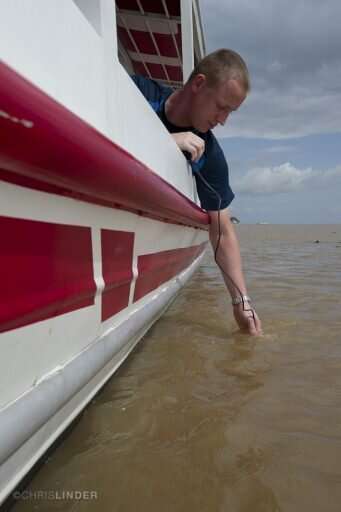 When La Niña brings unusually warm waters and abnormal air pressure to the Pacific Ocean, the resulting weather patterns create an increase in the carbon export from the Amazon River, new research from Florida State University has found.

In a normal year, the Amazon River exports about 10% of the world’s riverine dissolved organic carbon into the ocean. The study, which was published in Global Biogeochemical Cycles, shows that the 2011-2012 La Niña event added an additional 2.77 teragrams of dissolved organic carbon (DOC) per year to the outflow from the Amazon River. That’s equivalent to the amount exported from the Mississippi River in a typical year.

“That’s a big deal, because as global temperature and precipitation patterns continue to change, we’re missing out on this highly sensitive pool of organic carbon coming from the Amazon River that we previously didn’t account for in any of the estimates,” said doctoral student Martin Kurek, the paper’s lead author.

The researchers found that there was a six-month lag between increased precipitation in Amazonian headwaters from La Niña events and an increase in the DOC exported at a sampling station near the mouth of the Amazon River at Óbidos, Brazil. Much more of that DOC came from terrestrial sources than in a typical, non-La Niña year, highlighting the flushing of materials from land associated with increased rainfall due to the La Niña event.

Dissolved organic carbon is the most important intermediary in the global carbon cycle. Understanding that cycle is important because of the role carbon plays on Earth. For example, the organic matter exported by the Amazon River is a source of food for microorganisms in the ocean, as well as a source of carbon dioxide to the atmosphere, which has ramifications for the planet’s climate.

That work is akin to a doctor taking a blood sample from a patient to get an idea of the patient’s health, which helps researchers highlight when anomalies like La Niña are causing atypical conditions.

“We’re using a fairly similar approach to a medical doctor, but in this case, our patient is the Amazon River Basin, and we are taking water samples, not blood samples,” said Rob Spencer, an associate professor of biogeochemistry and head of the laboratory conducting the research. “This gives us a way to assess the health of the Amazon and to see the effects of human-driven factors, like logging, conversion of lands to agriculture and climate change. A big part of understanding all of that is setting a baseline. You have to know what your patient’s typical health is, and in this study, we set the baseline and then caught the impact of a La Niña event.”

Climate change is expected to make precipitation events like La Niña more frequent and more severe. For Spencer and his team, that highlights the importance of sustained data collection to document what’s happening in the Amazon Basin so scientists can better understand the impacts within the basin and what that means for the receiving Atlantic Ocean.

“I think many people are interested in how the Earth works and how it’s changing,” Spencer said. “If you want to understand how the planet is changing, one of the big things you need to know is how quickly the major river on Earth, the Amazon, is changing.”

Researchers from Northeastern University, ETH Zurich, Federal University of Western Para, Woodwell Climate Research Center, University of Oldenburg and Woods Hole Oceanographic Institution were co-authors on the first study. The work was partially supported by the National Science Foundation and the Harbourton Foundation.

Unchecked climate change will cause severe drying of the Amazon forest