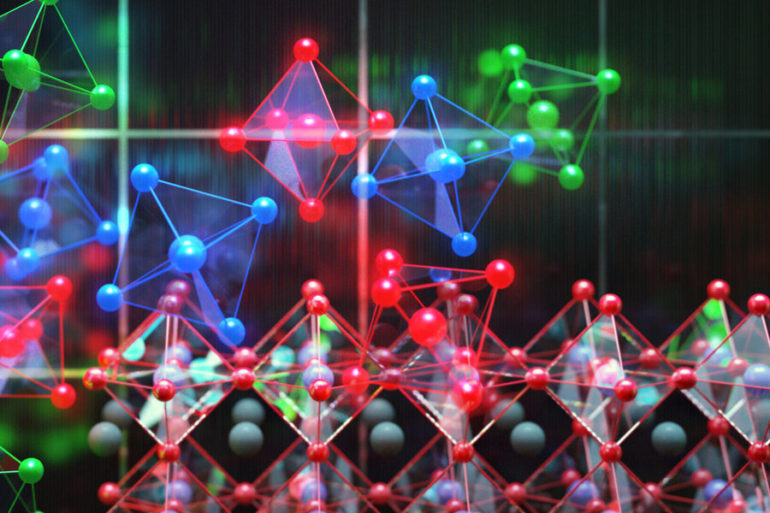 Perovskites are a leading candidate for eventually replacing silicon as the material of choice for solar panels. They offer the potential for low-cost, low-temperature manufacturing of ultrathin, lightweight flexible cells, but so far their efficiency at converting sunlight to electricity has lagged behind that of silicon and some other alternatives.

Now, a new approach to the design of perovskite cells has pushed the material to match or exceed the efficiency of today’s typical silicon cell, which generally ranges from 20 to 22 percent, laying the groundwork for further improvements.

By adding a specially treated conductive layer of tin dioxide bonded to the perovskite material, which provides an improved path for the charge carriers in the cell, and by modifying the perovskite formula, researchers have boosted its overall efficiency as a solar cell to 25.2 percent—a near-record for such materials, which eclipses the efficiency of many existing solar panels. (Perovskites still lag significantly in longevity compared to silicon, however, a challenge being worked on by teams around the world.)

The findings are described in a paper in the journal Nature by recent MIT graduate Jason Yoo Ph.D. ’20, professor of chemistry and Lester Wolfe Professor Moungi Bawendi, professor of electrical engineering and computer science and Fariborz Maseeh Professor in Emerging Technology Vladimir Bulović, and 11 others at MIT, in South Korea, and in Georgia.

Perovskites are a broad class of materials defined by the fact that they have a particular kind of molecular arrangement, or lattice, that resembles that of the naturally occurring mineral perovskite. There are vast numbers of possible chemical combinations that can make perovskites, and Yoo explains that these materials have attracted worldwide interest because “at least on paper, they could be made much more cheaply than silicon or gallium arsenide,” one of the other leading contenders. That’s partly because of the much simpler processing and manufacturing processes, which for silicon or gallium arsenide requires sustained heat of over 1,000 degrees Celsius. In contrast, perovskites can be processed at less than 200 C, either in solution or by vapor deposition.

The other major advantage of perovskite over silicon or many other candidate replacements is that it forms extremely thin layers while still efficiently capturing solar energy. “Perovskite cells have the potential to be lightweight compared to silicon, by orders of magnitude,” Bawendi says.

Perovskites have a higher bandgap than silicon, which means they absorb a different part of the light spectrum and thus can complement silicon cells to provide even greater combined efficiencies. But even using only perovskite, Yoo says, “what we’re demonstrating is that even with a single active layer, we can make efficiencies that threaten silicon, and hopefully within punching distance of gallium arsenide. And both of those technologies have been around for much longer than perovskites have.”

One of the keys to the team’s improvement of the material’s efficiency, Bawendi explains, was in the precise engineering of one layer of the sandwich that makes up a perovskite solar cell—the electron transport layer. The perovskite itself is layered with a transparent conductive layer used to carry an electric current from the cell out to where it can be used. However, if the conductive layer is directly attached to the perovskite itself, the electrons and their counterparts, called holes, simply recombine on the spot and no current flows. In the researchers’ design, the perovskite and the conductive layer are separated by an improved type of intermediate layer that can let the electrons through while preventing the recombination.

This middle electron transport layer, and especially the interfaces where it connects to the layers on each side of it, tend to be where inefficiencies occur. By studying these mechanisms and designing a layer, consisting of tin oxide, that more perfectly conforms with those adjacent to it, the researchers were able to greatly reduce the losses.

The method they use is called chemical bath deposition. “It’s like slow cooking in a Crock-Pot,” Bawendi says. With a bath at 90 degrees Celsius, precursor chemicals slowly decompose to form the layer of tin dioxide in place. “The team realized that if we understood the decomposition mechanisms of these precursors, then we’d have a better understanding of how these films form. We were able to find the right window in which the electron transport layer with ideal properties can be synthesized.”

After a series of controlled experiments, they found that different mixtures of intermediate compounds would form, depending on the acidity of the precursor solution. They also identified a sweet spot of precursor compositions that allowed the reaction to produce a much more effective film.

The researchers combined these steps with an optimization of the perovskite layer itself. They used a set of additives to the perovskite recipe to improve its stability, which had been tried before but had an undesired effect on the material’s bandgap, making it a less efficient light absorber. The team found that by adding much smaller amounts of these additives—less than 1 percent—they could still get the beneficial effects without altering the bandgap.

The resulting improvement in efficiency has already driven the material to over 80 percent of the theoretical maximum efficiency that such materials could have, Yoo says.

While these high efficiencies were demonstrated in tiny lab-scale devices, Bawendi says that “the kind of insights we provide in this paper, and some of the tricks we provide, could potentially be applied to the methods that people are now developing for large-scale, manufacturable perovskite cells, and therefore boost those efficiencies.”

In pursuing the research further, there are two important avenues, he says: to continue pushing the limits on better efficiency, and to focus on increasing the material’s long-term stability, which currently is measured in months, compared to decades for silicon cells. But for some purposes, Bawendi points out, longevity may not be so essential. Many electronic devices such as cellphones, for example, tend to be replaced within a few years anyway, so there may be some useful applications even for relatively short-lived solar cells.

“I don’t think we’re there yet with these cells, even for these kind of shorter-term applications,” he says. “But people are getting close, so combining our ideas in this paper with ideas that other people have with increasing stability could lead to something really interesting.”

Robert Hoye, a lecturer in materials at Imperial College London, who was not part of the study, says, “This is excellent work by an international team.” He adds, “This could lead to greater reproducibility and the excellent device efficiencies achieved in the lab translating to commercialized modules. In terms of scientific milestones, not only do they achieve an efficiency that was the certified record for perovskite solar cells for much of last year, they also achieve open-circuit voltages up to 97 percent of the radiative limit. This is an astonishing achievement for solar cells grown from solution.”