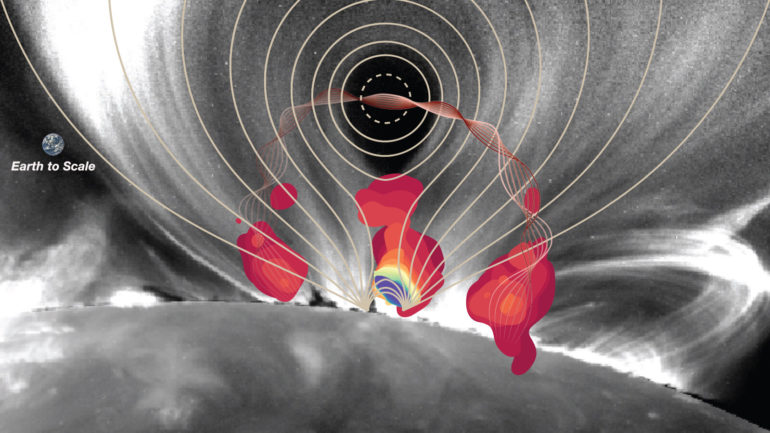 In a study published in Nature Astronomy, an international team of researchers has presented a new, detailed look inside the “central engine” of a large solar flare accompanied by a powerful eruption first captured on Sept. 10, 2017 by the Owens Valley Solar Array (EOVSA)—a solar radio telescope facility operated by New Jersey Institute of Technology’s (NJIT) Center for Solar-Terrestrial Research (CSTR).

The new findings, based on EOVSA’s observations of the event at microwave wavelengths, offer the first measurements characterizing the magnetic fields and particles at the heart of the explosion. The results have revealed an enormous electric current “sheet” stretching more than 40,000 kilometers through the core flaring region where opposing magnetic field lines approach each other, break and reconnect, generating the intense energy powering the flare.

Notably, the team’s measurements also indicate a magnetic bottle-like structure located at the top of the flare’s loop-shaped base (known as the flare arcade) at a height of nearly 20,000 kilometers above the Sun’s surface. The structure, the team suggests, is likely the primary site where the flare’s highly energetic electrons are trapped and accelerated to nearly the speed of light.

Respiratory failure in COVID-19 usually not driven by cytokine storm

Researchers say the study’s new insight into the central engine that drives such powerful eruptions may aid future space weather predictions for potentially catastrophic energy releases from solar flares—the solar system’s most powerful explosions, capable of severely disrupting technologies on Earth such as…