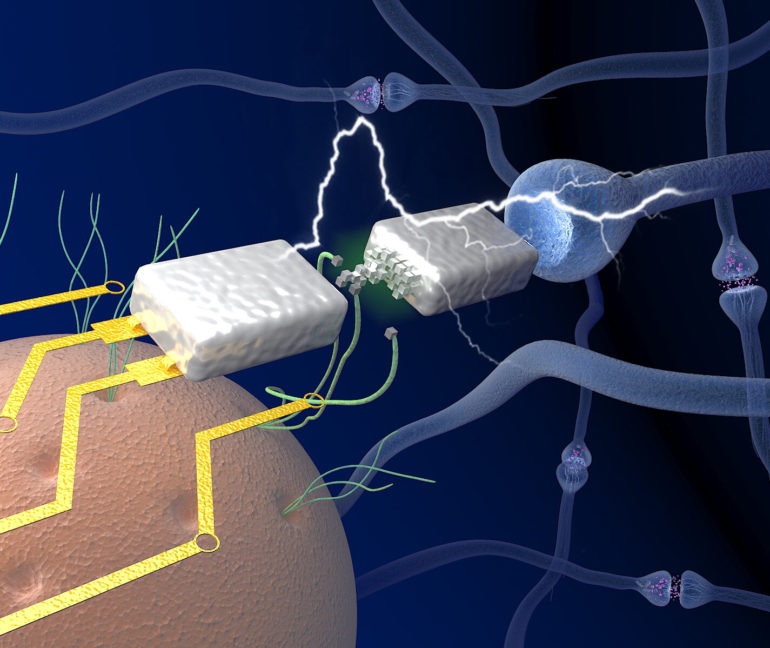 Only 10 years ago, scientists working on what they hoped would open a new frontier of neuromorphic computing could only dream of a device using miniature tools called memristors that would function/operate like real brain synapses.

But now a team at the University of Massachusetts Amherst has discovered, while on their way to better understanding protein nanowires, how to use these biological, electricity conducting filaments to make a neuromorphic memristor, or “memory transistor,” device. It runs extremely efficiently on very low power, as brains do, to carry signals between neurons. Details are in Nature Communications.

As first author Tianda Fu, a Ph.D. candidate in electrical and computer engineering, explains, one of the biggest hurdles to neuromorphic computing, and one that made it seem unreachable, is that most conventional computers operate at over 1 volt, while the brain sends signals called action potentials between neurons at around 80 millivolts—many times lower. Today, a decade after early experiments, memristor voltage has been achieved in the range similar to conventional computer, but getting below that seemed improbable, he adds.

Fu reports that using protein nanowires developed at UMass Amherst from the bacterium Geobacter by microbiologist and co-author Derek Lovely, he has now conducted experiments where memristors have reached neurological voltages. Those tests were carried out in the lab of electrical and computer engineering researcher and co-author Jun Yao.

Even with COVID-19 spread near zero, chief scientist says Australia’s systems are ready

Yao says, “This is the first time that a device can function at the same voltage level as the brain….