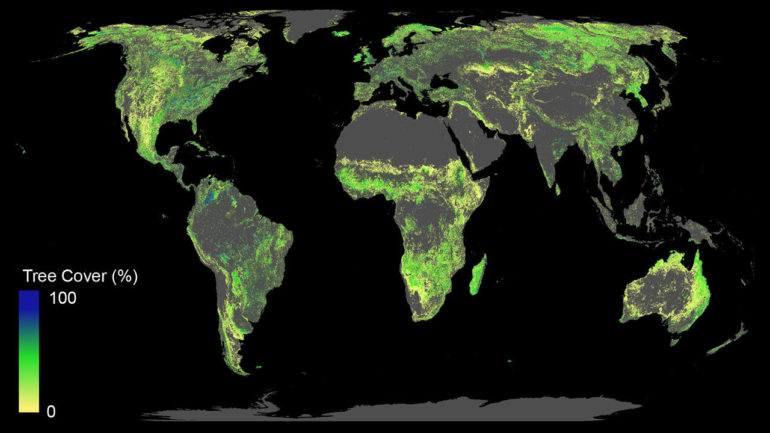 If current trends continue, by 2030, global temperatures could rise by more than 1.5 °C compared to industrial levels. A potential solution: trees, many trees. Indeed, if they were planted in large numbers and around the world, they could help stop the climate crisis. According to a new analysis, the addition of nearly one billion hectares of additional forest could eliminate two-thirds of the 300 gigatonnes of CO2 emitted by humans in the atmosphere in just two centuries.

The last report of the United Nations Intergovernmental Panel on Climate Change recommended adding one billion hectares of forests to help limit global warming to 1.5 °C by 2050. Ecologists Jean-François Bastin and Tom Crowther of the Swiss Federal Institute of Technology of Zurich (ETH Zurich) and their co-authors wanted to know if the planet, as it is today, could support so many additional trees. Their study was also to determine the ideal areas to plant them.

“Forests are one of our key natural allies against climate change,” says Laura Duncanson, a carbon storage researcher at the University of Maryland College Park and NASA, who was not involved in the research. Nevertheless, “it is a simplified analysis of carbon recovery that forests could recover, so we should not consider this a miracle solution,” she warned.

The researchers analyzed nearly 80,000 satellite photographs to determine the current forest cover. They then ranked the different areas of the planet according to 10 characteristics of the soil and the climate. This allowed to identify locations more or less adapted to different types of forests. After subtracting existing forests and areas dominated by agriculture or cities, they calculated the amount of land suitable for growing trees.

Earth could naturally support 0.9 billion hectares of additional forest – an area the size of the United States – without encroaching on existing urban or agricultural land, the researchers report to Sciencemag. These added trees could sequester 205 gigatonnes of carbon in the coming decades, about five times the global amount released in 2018.

“This work reflects the magnitude of what forests can do for us,” says environmentalist Greg Asner of Arizona State University in Tempe, who was not involved in the study. “They will have to play a role if humanity wants to achieve its climate change mitigation goals.”

Moreover, it should be noted that the addition of forests would not only sequester carbon. Forests offer a lot of additional benefits, including improved biodiversity, improved water quality and reduced erosion. According to estimates, the cost of forest restoration at this scale would vary, but based on prices of about 0.30 dollars per tree, Tom Crowther estimates that it could amount to about 300 billion dollars.

The exact amount of carbon that future forests may store may not be very clear, but NASA has sent new instruments into space, such as Global Ecosystem Dynamics Investigation (GEDI) aboard the International Space Station, which will use lasers to create high resolution 3D maps of forests and canopy. These data will add essential precision to existing estimates of surface carbon storage.

“With GEDI, we can consider this study as a stepping stone and complement it with much more accurate carbon estimates,” says Duncanson. “There has always been great uncertainty about large-scale carbon totals, but we will soon have richer and more accurate data.”