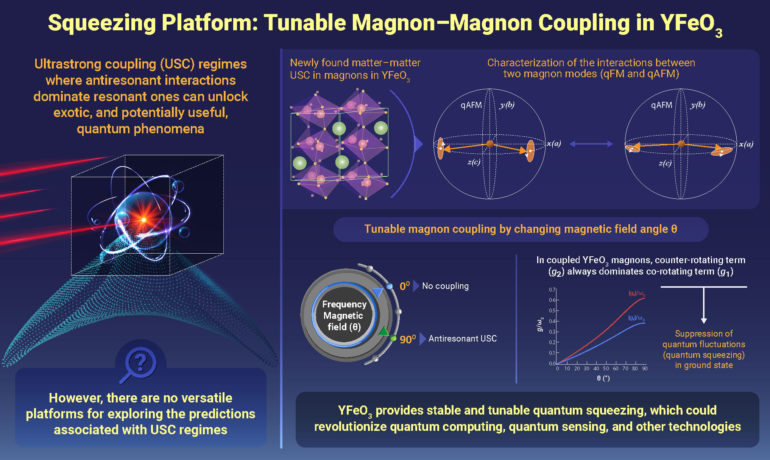 Sometimes things are a little out of whack, and it turns out to be exactly what you need.

That was the case when orthoferrite crystals turned up at a Rice University laboratory slightly misaligned. Those crystals inadvertently became the basis of a discovery that should resonate with researchers studying spintronics-based quantum technology.

Orthoferrites are iron oxide crystals with the addition of one or more rare-earth elements.

Magnons are quasiparticles, ghostly constructs that represent the collective excitation of electron spin in a crystal lattice.

What one has to do with the other is the basis of a study that appears in Nature Communications, where Kono and his team describe an unusual coupling between two magnons dominated by antiresonance, through which both magnons gain or lose energy simultaneously.

Usually, when two oscillators resonantly couple, one gains energy at the expense of the other, conserving total energy, Kono said.

But in antiresonant (or counterrotating) coupling, both oscillators can gain or lose energy at the same time through interaction with the quantum vacuum, the zero-point field predicted to exist by quantum mechanics.

Think of it as an ephemeral seesaw that can be forced to bend in the middle.

Makihara and co-authors Kenji Hayashida of Hokkaido University and physicist Motoaki Bamba of Kyoto University used the discovery to show via theory the likelihood of significant quantum squeezing in the ground state of the coupled magnon-magnon system.

In the squeezed state, the amount of fluctuation, or noise, of a measurable quantity associated with the magnons can be suppressed, with simultaneously increased noise in another quantity, Kono said. “It’s related to the Heisenberg uncertainty principle in which a set of variables is correlated, but if you try to precisely measure one, you lose information about the other. If you squeeze one, uncertainty about the other grows.

“Usually, in order to create a quantum squeezed state, one has to strongly drive the system using a laser beam. But Takuma’s system is intrinsically squeezed; that is, it can be described as an already squeezed state,” he said. “This could become a useful platform for quantum sensing applications.”

Makihara said the unique state is achieved with a strong magnetic field like that used in magnetic resonance imaging. The field applies torque to the magnetic moments in atoms, in this case those of the orthoferrite. That causes them to rotate (or precess).

That takes a powerful field. The Kono lab’s RAMBO—the Rice Advanced Magnet with Broadband Optics—is a unique spectrometer developed with physicist Hiroyuki Nojiri at Tohoku University that allows researchers to expose materials cooled to near absolute zero to powerful magnetic fields up to 30 tesla in combination with ultrashort laser pulses.

“We were saying, ‘What can we study with RAMBO? What new physics is there in this unique regime?'” said Makihara, now a graduate student at Stanford University. “Orthoferrites have these magnons that shift up to 30 tesla and frequencies in the terahertz regime. The initial measurements weren’t that interesting.

“But then we received crystals (grown by Shanghai University physicist Shixun Cao and his group) that didn’t have perfectly parallel faces,” he said. “They were kind of cut at an angle. And one day, we loaded the crystal on the magnet at such an angle that the magnetic field was not applied along the crystal axis.

“We expected the magnon frequency to just shift up with the magnetic field, but when it was tilted, we saw a small gap,” Makihara said. “So, after discussing this finding with Professor Bamba, we explicitly requested crystals that were cut at different angles and measured those, and saw this huge degree of anti-crossing. That’s the signature of ultrastrong coupling.”

Antiresonance always exists in light-matter and matter-matter interactions but is a minor presence compared to the dominant resonant interaction, the researchers noted. That was not the case with the orthoferrites studied by the Kono lab.

Exposing the material to a high magnetic field and tilting the crystal with respect to the field pumped antiresonance that equaled and even surpassed the resonance.

“In light-matter systems, when the frequencies of light and matter become equal, they mix together to form a polariton,” he said. “Something similar happens in our case, but it’s between matter and matter. Two magnon modes hybridize. There is a long-standing question of what happens when the degree of hybridization becomes so high that it even exceeds the resonance energy.

“In such a regime, exotic phenomena are predicted to occur due to counterrotating interactions, including a squeezed vacuum state and a phase transition into a novel state where static fields spontaneously appear,” he said. “And we found that we can achieve such conditions by tuning the magnetic field.”

The new study advances the Kono team’s efforts to observe the Dicke superradiant phase transition, a phenomenon that could create a new exotic state of matter and lead to advances in quantum memory and transduction. The lab found a promising approach for realizing it in matter-matter coupling in 2018, reporting its discovery in Science.

The discovery also demonstrates that orthoferrite in a magnetic field could serve as a quantum simulator, a simple and highly tunable quantum system that represents a more complex one with an intractable number of interacting particles or an experimentally inaccessible regime of parameters, Kono said.

Tunable magnon-magnon coupling in orthoferrites can be used to provide insight into the nature of the ground state of an ultrastrong, coupled light-matter hybrid, he said.

Kono said their findings will also prompt a search for more materials that exhibit the effect. “Rare-earth orthoferrites is a big family of materials, and we studied just one,” he said.

Quantum shift shows itself in coupled light and matter