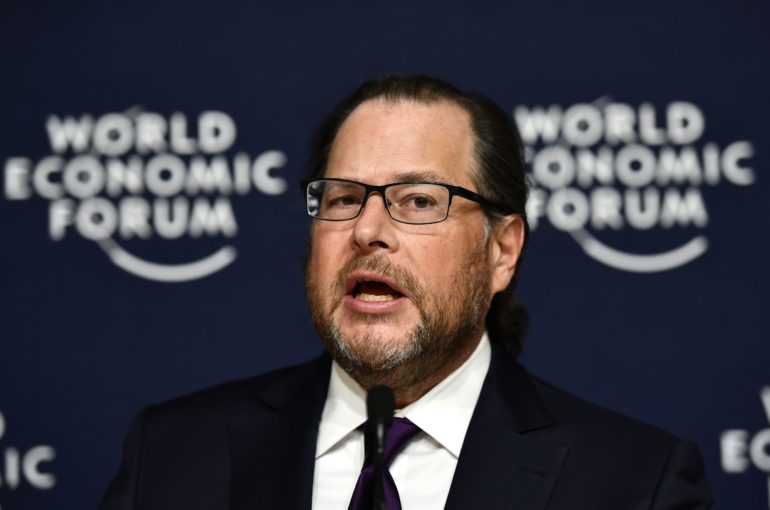 Revenue grew 20% in the quarter ended Oct. 31, according to a statement, compared with 29% in the prior quarter.

The company’s core Sales Cloud product for keeping track of current and potential customers delivered $1.3 billion in revenue, up 12% year over year. Service Cloud, for handling customer service, generated $1.4 billion in revenue, up 21%. Salesforce’s Platform and Other category, which includes the Tableau data visualization software Salesforce acquired last year, came up with $1.6 billion, a 24% gain.

In the quarter Salesforce became one of the 30 companies in the Dow Jones Industrial Average. Salesforce announced Work.com for Schools, a tool to help educators with decisions about when to return to classrooms, along with Salesforce Meetings software that provides sales-related information to salespeople who participate in video calls.

As the coronavirus pandemic continued, Salesforce opted to consolidate and sublease some of its locations, Hawkins said during a conference call with analysts. The changes will result in a one-time charge of $80 million to $100 million in the fiscal fourth quarter.

Salesforce issued revenue guidance for the full 2022 fiscal year that was stronger than expected. The company called for $25.45 billion to $25.55 billion in revenue, which includes a $600 million contribution from Slack, assuming it closes in the late second quarter. The forecast implies 20.8% annualized growth over Salesforce’s fiscal year 2021 guidance. Analysts polled by Refinitiv had been looking for $24.50 billion in revenue.

“We feel very good about our ability to succeed,” Marc Benioff, Salesforce CEO Marc Benioff said on the call.

Mark Hawkins, Salesforce’s chief financial officer, who joined in 2014 from Autodesk, where he had been that company’s finance chief, will retire on Jan. 31. Amy Weaver, Salesforce’s president and chief legal officer, will be Hawkins’ successor.

Excluding the after-hours move, Salesforce stock is up about 49% since the start of the year, compared with 13% growth in the S&P 500 index over the same period.

WATCH: Cramer’s lightning round: Start a position in Salesforce