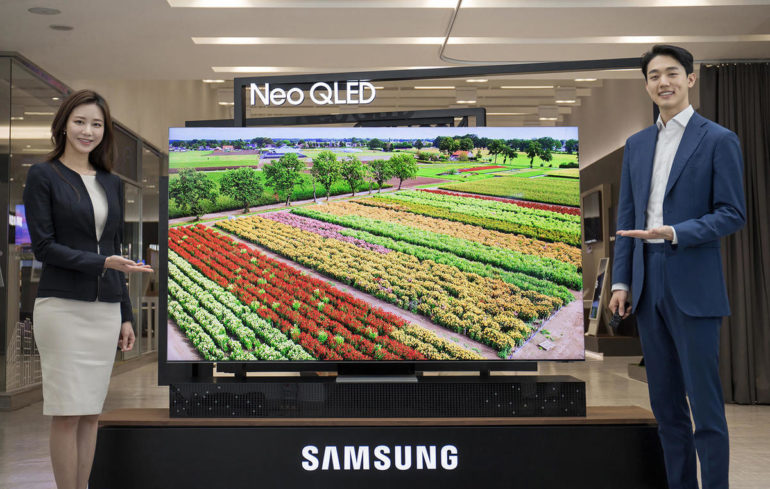 The liquid crystal display (LCD) TVs use MiniLEDs as their light source, which Samsung has labelled as Quantum Mini LED, and will come in 8K and 4K models.

Samsung said the LEDs on Neo QLED TVs will be one-fortieth of the height of conventional LEDs used for backlighting. This will allow many more of them packed together, the company said.

The densely packed LEDs will be controlled precisely to prevent blooming and the luminance scale of the Neo QLED TVs will be 12-bit with 4096 steps, which will make dark areas darker and bright areas brighter, Samsung said. The TV will also come with an upscaling processor.

The 8K version, specifically, will have a bezel-less and cable-less design.

Neo QLED will be the highest tier brand in Samsung’s LCD TV line-up followed by QLED.

Samsung also unveiled a 99-inch version of its MicroLED TV that is aimed at the home market. The 99-inch TV will be available in March, together with the 110-inch model introduced in December.

MicroLED TVs have no backlighting and the micrometre-sized LED light emits on their own for better contrast ratios and colour accuracy compared to LCD TVs.

In Apps and WebCybersecuritySmartphones
on 14 May 20211 min read

Like the 110-inch model, the 99-inch model can split the screen into four to watch separate channels simultaneously and offers 5.1 channel sound without the need for external speakers. The pricing for the 99-inch model is yet to be announced.

Samsung also said that its 2021 model TVs will come with solar-powered remote controls that can be recharged by indoor and outdoor light, in addition to USB.