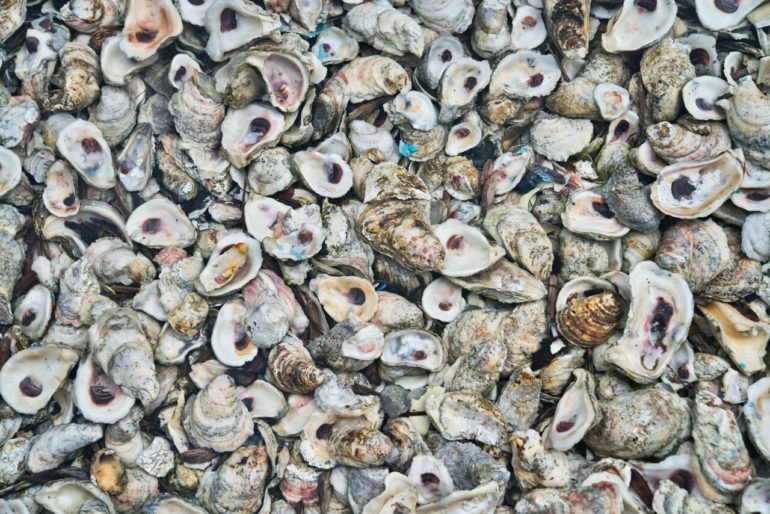 Scientists from the University of Rhode Island have taken the first steps toward understanding the function of microbes that live on and in Eastern oysters, which may have implications for oyster health and the management of oyster reefs and aquaculture facilities.

“Marine invertebrates like oysters, corals and sponges have a very active microbiome that could potentially play a role in the function of the organism itself,” said Ying Zhang, URI associate professor of cell and molecular biology. “We know very little about whether there are resident microbes in oysters, and if there are, what their function may be or how they may help or bring harm to the oyster.”

Zhang and doctoral student Zachary Pimentel extracted the DNA of microbes living in or on the gut, gill, inner shell, mantle and other tissues of oysters to identify the microbes that live there. They then applied a metagenomics technology to reconstruct the genome of the most abundant microbes to better understand the nature of the oyster microbiome and the function of some of the microbes.

“This was the first overview of what microbes live in certain parts of Eastern oysters,” said Pimentel, the lead author on a paper about the study published in May by the American Society for Microbiology. “In humans, we know that the microbes that live in the gut versus the skin are quite different. But we didn’t know about the compartmentalization of certain microbes in certain oyster tissues.”

The researchers identified one microbe, a bacterium in the class Mollicutes, that gains energy from the consumption of chitin, a substance found throughout the marine environment. It was most abundant in the gut of the oysters and appears to be an indicator of a healthy oyster, but when found in other tissues, it may be correlated with infections.

“When they’re abundant in the gut of healthy oysters, that may indicate that the oysters are happy to have them,” Zhang said. “But when the microbe gains abundance in other tissues, that may be a sign that the oyster is not doing well, maybe because the immune system is freaked out.”

The same microbe was also discovered to consume arginine, an amino acid found in all organisms that is used to create proteins.

“We’re really interested in that one because it has potential implications for the immune system of oysters,” Pimentel said. “Oysters rely on arginine for its immune response. A pathogen has been found to steal the arginine to hide from the oyster’s immune system, so it’s really interesting that there’s another microbe that uses arginine and has potential implications for oyster immunity.”

Once the researchers have identified the function of key beneficial microbes, the next step is to learn when and where the microbes are acquired.

“One microbe was found to be abundant in adult oysters but very rare in larval samples,” Zhang said. “So they could be acquired at some point in their growth, but when and how they are acquired is a big question. If we know they are important and we can identify the source of where they came from, then perhaps we can help preserve the population of this specific microbe.”

According to Zhang and Pimentel, oysters play an important role in building reefs, filtering water, and providing other ecological functions, in addition to their role in supporting the aquaculture industry. Further research about the microbiome of oysters could be beneficial to understanding more about oyster health and the health of their ecosystem.

“We know for other organisms that the microbiome is a really important factor when considering health and disease, so we’re laying the groundwork for future research that might implicate certain microbes in important processes related to health and disease,” Pimentel said.

In Apps and WebCompaniesSmartphones
on 4 June 202111 min read

“The more we know about oysters and their interactions with microbes, the more we’ll understand about how to conserve them,” added Zhang.

What makes some oysters more resilient than others?

Provided by
University of Rhode Island