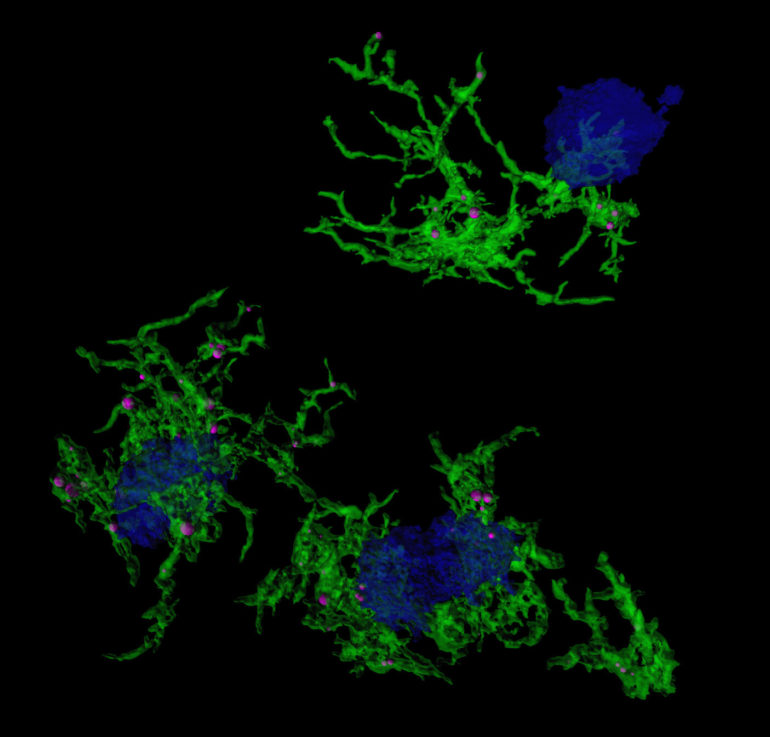 Alzheimer’s disease is the most common form of dementia and is characterized by the build-up of amyloid plaques in the brain. Microglia, the immune sentinels of the brain, are not only responsible for eliminating foreign invaders, but also maintaining brain homeostasis by clearing toxic waste such as the amyloid plaques.

However, the role of microglia in Alzheimer’s disease and its relationship to amyloid plaque accumulation remain unclear. Now, a team of scientists from Duke-NUS Medical School and Monash University have found the gene expression signatures underlying microglia associated with amyloid plaque phagocytosis—i.e., the engulfing of deposits of amyloid beta (Aβ) protein in the brain. The findings, reported in the journal Nature Communications, offer a new target for interventions that aim to address the underlying disease mechanism of this incurable disease.

To investigate the differences between healthy brains and those of patients with Alzheimer’s disease at the single-cell resolution, the team of scientists at Duke-NUS and Monash embarked on an comprehensive project to study gene expression changes in specific human brain cell types that are associated with progression of Alzheimer’s disease. From that study, which was published in Nature Neuroscience in 2019, the team have focused on microglia.

“We sought to understand the molecular mechanisms and differences between microglia that were actively engulfing amyloid plaques in Alzheimer’s disease and those that weren’t,” said Associate Professor Enrico Petretto from Duke-NUS’s Cardiovascular and Metabolic Disorders Program, a co-senior author of the study.

The team did this by using a stain called methoxy-XO4 that specifically targets microglia that have engulfed amyloid plaques. They used the stain in preclinical models of Alzheimer’s disease and then examined gene expression in the stained microglia. They investigated differences in gene expression underlying microglia’s ability to ingest particles (e.g. amyloid plaque) and identified associated regulatory molecules.

“Understanding this mechanism is important because now we have several new targets to go after, and in the future, these targets may open a new front against this devastating disease,” said Professor Jose M. Polo from the Monash Biomedicine Discovery Institute, a co-senior author of the study.

The studies revealed that for microglia that have not taken up amyloid, their gene expression patterns are most similar to aged microglia, which are known to be dysfunctional and a major player in Alzheimer’s disease pathogenesis. In addition, after microglia engulfed the amyloid plaques associated with Alzheimer’s disease, they develop a characteristic gene expression pattern or signature. This change in gene expression is induced, in part, by a gene called Hif1a. The changed gene expression increases the ability of microglia to take up proteins such as amyloid, while reducing Hif1a does the reverse, highlighting the importance of Hif1a in controlling this microglia function. This regulatory role of Hif1a might also apply to the microglia function of removing damaged synapses.

“It is possible that this process is initially protective,” said Assoc Prof Petretto, “with the microglia effectively pruning damaged synapses located near plaques.” The scientists suspect, however, that this pruning process later goes awry as the disease progresses.

The team also used computational models to predict the networks of molecules involved in microglia uptake of proteins and identified potential targets to study for drug development. The widely used immunosuppressant drug rapamycin, for example, was found to block the gene Hif1a from triggering microglia to engulf amyloid plaques.

“This relationship between Hif1a and cognitive decline in Alzheimer’s disease is yet to be comprehensively uncovered,” said Ph.D. student Gabriel Chew, who is a co-first author of the paper. “Future work could focus on using gene editing tool CRISPR to test the impact of manipulating Hif1a on symptom severity and disease progression.”

There’s a Secret Message Coded Into Percy’s Parachute. But It’s Not The Only One

In surprising twist, some Alzheimer’s plaques may be protective, not destructive