Scientists explore the latent regenerative potential of the inner ear 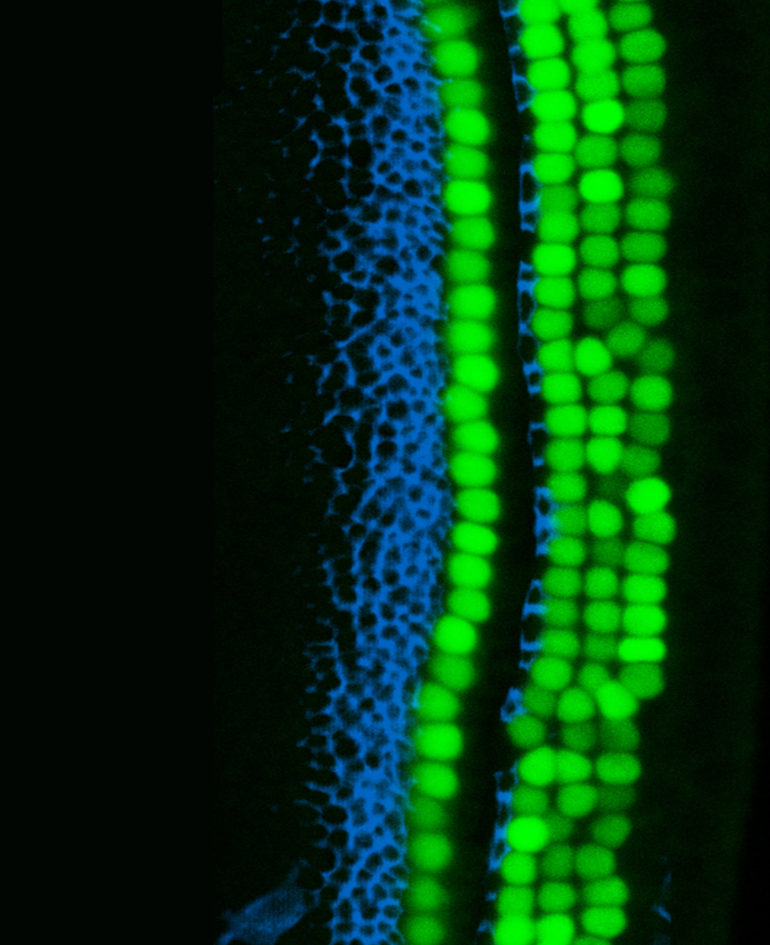 Scientists from the USC Stem Cell laboratory of Neil Segil have identified a natural barrier to the regeneration of the inner ear’s sensory cells, which are lost in hearing and balance disorders. Overcoming this barrier may be a first step in returning inner ear cells to a newborn-like state that’s primed for regeneration, as described in a new study published in Developmental Cell.

“Permanent hearing loss affects more than 60 percent of the population that reaches retirement age,” said Segil, who is a Professor in the Department of Stem Cell Biology and Regenerative Medicine, and the USC Tina and Rick Caruso Department of Otolaryngology—Head and Neck Surgery. “Our study suggests new gene engineering approaches that could be used to channel some of the same regenerative capability present in embryonic inner ear cells.”

In the inner ear, the hearing organ, which is the cochlea, contains two major types of sensory cells: “hair cells” that have hair-like cellular projections that receive sound vibrations; and so-called “supporting cells” that play important structural and functional roles.

When the delicate hair cells incur damage from loud noises, certain prescription drugs, or other harmful agents, the resulting hearing loss is permanent in older mammals. However, for the first few days of life, lab mice retain an ability for supporting cells to transform into hair cells through a process known as “transdifferentiation”, allowing recovery from hearing loss. By one week of age, mice lose this regenerative capacity—also lost in humans, probably before birth.

Based on these observations, postdoctoral scholar Litao Tao, Ph.D., graduate student Haoze (Vincent) Yu, and their colleagues took a closer look at neonatal changes that cause supporting cells to lose their potential for transdifferentiation.

In supporting cells, the hundreds of genes that instruct transdifferentiation into hair cells are normally turned off. To turn genes on and off, the body relies on activating and repressive molecules that decorate the proteins known as histones.  In response to these decorations known as “epigenetic modifications,” the histone proteins wrap the DNA into each cell nucleus, controlling which genes are turned “on” by being loosely wrapped and accessible, and which are turned “off” by being tightly wrapped and inaccessible. In this way, epigenetic modifications regulate gene activity and control the emergent properties of the genome.

“Our study raises the possibility of using therapeutic drugs, gene editing, or other strategies to make epigenetic modifications that tap into the latent regenerative capacity of inner ear cells as a way to restore hearing,” said Segil. “Similar epigenetic modifications may also prove useful in other non-regenerating tissues, such as the retina, kidney, lung, and heart.”

A common ancestor for cells involved in hearing and touch

Genomic time machine: From sponge microbiome, insights into evolutionary past