Scientists Just Revealed The Largest-Ever 3D Map of The Universe, And It’s Glorious 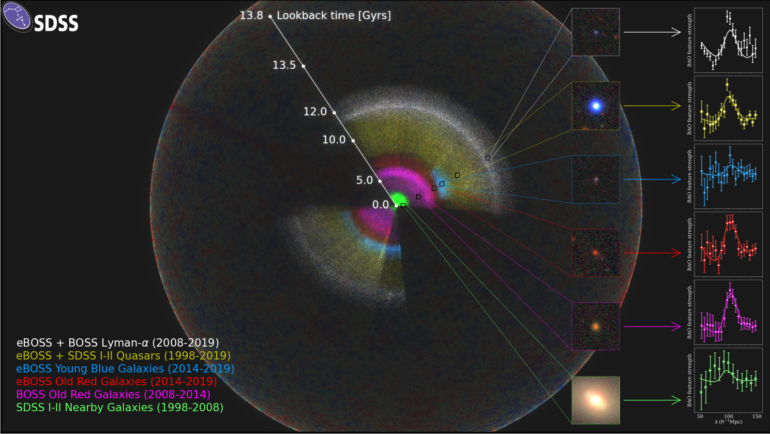 Astrophysicists on Monday published the largest-ever 3D map of the Universe, the result of an analysis of more than 4 million galaxies and ultra-bright, energy-packed quasars.

The efforts of hundreds of scientists from around 30 institutions worldwide have yielded a “complete story of the expansion of the Universe”, said Will Percival of the University of Waterloo in Ontario, Canada.

In the project launched more than two decades ago, the researchers made “the most accurate expansion history measurements over the widest-ever range of cosmic time”, he said in a statement.

The map relies on the latest observations of the Sloan Digital Sky Survey (SDSS), titled the “extended Baryon Oscillation Spectroscopic Survey” (eBOSS), with data collected from an optical telescope in New Mexico over six years.

The infant Universe following the Big Bang is relatively well known through extensive theoretical models and observation of cosmic microwave background – the electromagnetic radiation of the nascent cosmos.

Studies of galaxies and distance measurements also contributed to a better understanding of the Universe’s expansion over billions of years.

Light in your bedroom is no good for your health

But Kyle Dawson of the University of Utah, who unveiled the map on Monday, said the researchers tackled a “troublesome gap in the middle 11 billion years”.

Through “five years of continuous observations, we have worked to fill in that gap, and we are using that information to provide some of the most substantial advances in cosmology in the last decade,” he said.

Astrophysicist Jean-Paul Kneib of the Swiss Federal Institute of…