Scientists solve the mystery behind an enigmatic organelle, the pyrenoid 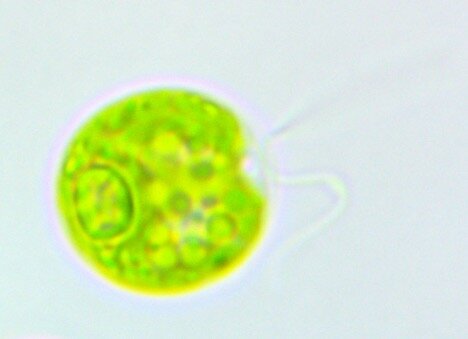 Carbon is one of the main building blocks for life on Earth. It’s abundant in our planet’s atmosphere, where it’s found in the form of carbon dioxide. Carbon makes its way into Earthlings’ bodies mainly through the process of photosynthesis, which incorporates carbon dioxide into sugars that serve as components for important biomolecules and fuel the global food chain. About a third of this process globally is carried out by single-celled algae that live in the oceans (most of the rest is done by plants).

The enzyme that performs the first step of the reaction to assimilate carbon dioxide into sugars is a bulky protein called Rubisco assembled from eight identical small subunits and eight identical large subunits arranged together symmetrically. All the parts of this assembly, which is called a holoenzyme, work in concert to perform Rubisco’s enzymatic duty. Rubisco’s rate of activity—and by extension, the rate at which plants and algae can grow—is limited by its access to carbon dioxide. Free carbon dioxide can be scarce in water, so aquatic algae such as Chlamydomonas reinhardtii sometimes struggle to keep Rubisco working at peak capacity. To counteract this, these algae evolved a special structure called the pyrenoid to supply concentrated carbon dioxide to Rubisco. The pyrenoid is so important that almost all algae on the planet have one. Different species of algae are thought to have evolved the structure independently.

“The defining feature of a pyrenoid is the matrix, a giant liquid-like condensate that contains nearly all of the cell’s Rubisco,” explains Jonikas, an Assistant Professor in the Department of Molecular Biology at Princeton.

Rubisco is the main component of the pyrenoid matrix, but not the only one; in 2016, Jonikas’s lab discovered another abundant protein in the pyrenoid called EPYC1. In their 2016 paper, Jonikas’s group showed that EPYC1 binds to Rubisco and helps concentrate Rubisco in the pyrenoid. The researchers theorized that EPYC1 works like a molecular glue to link together Rubisco holoenzymes. Postdoc Shan He, together with colleagues in Jonikas’s lab and collaborators from Germany, Singapore and England, set out to test this theory.

“In the present work, we demonstrate that this is indeed how it works,” says Jonikas, “by showing that EPYC1 has five binding sites for Rubisco, allowing it to ‘link’ together multiple Rubisco holoenzymes.”

EPYC1 is a loosely structured, extended protein, and its five Rubisco binding sites are evenly distributed across its length. The researchers also found that Rubisco has eight EPYC1 binding sites distributed evenly across its ball-like surface. Computer modeling showed that the loosely structured and flexible EPYC1 protein can make multiple contacts with a single Rubisco holoenzyme or bridge together neighboring ones. In this way, EPYC1 drives Rubisco to cluster in the pyrenoid matrix.

Although this offers a satisfying explanation for how the matrix is assembled, it poses something of a conundrum. Other proteins need to be able to access Rubisco to repair it when it breaks down. If the EPYC1-Rubisco network is rigid, it could block these proteins from accessing Rubisco. However, He and colleagues found that EPYC1’s interactions with Rubisco are fairly weak, so although the two proteins may form many contacts with each other, these contacts are exchanging rapidly.

“This allows EPYC1 and Rubisco to flow past each other while staying in a densely packed condensate, allowing other pyrenoid proteins to also access Rubisco,” notes Jonikas. “Our work solves the longstanding mystery of how Rubisco is held together in the pyrenoid matrix”.

Land plants don’t have pyrenoids, and scientists think that engineering a pyrenoid-like structure into crop plants could boost their growth rates. Understanding how the pyrenoid is assembled in algae represents a significant step toward such efforts.

“He and colleagues provide a very nice molecular study of the protein-protein interactions between the Rubisco small subunit and EPYC1,” says Dr. James Moroney, Professor of Biology at the Louisiana State University department of Biological Sciences, whose lab studies photosynthesis in plants and algae.

“This work is encouraging for researchers trying to introduce pyrenoid-like structures into plants to improve photosynthesis,” he adds.

In a world beset by hunger and disease, we can use all the boosts we can get.

Scientists discover a motif that guides assembly of the algal pyrenoid


Citation:
Scientists solve the mystery behind an enigmatic organelle, the pyrenoid (2020, November 25)
retrieved 25 November 2020
from https://phys.org/news/2020-11-scientists-mystery-enigmatic-organelle-pyrenoid.html