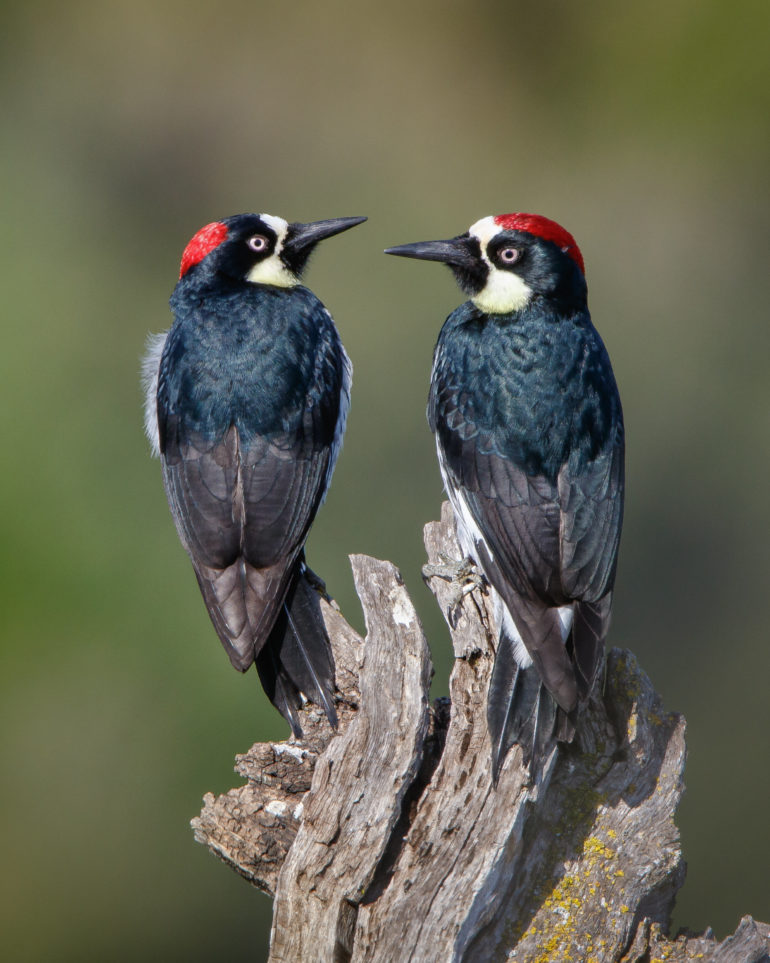 A new long-term study led by Sahas Barve, a Peter Buck Fellow at the Smithsonian’s National Museum of Natural History, finds that male acorn woodpeckers breeding polygamously in duos or trios of males actually fathered more offspring than males breeding alone with a single female, contrary to conventional thinking among biologists that monogamous males necessarily produce more offspring than those in polygamous groups. For females, polygamy is less of a slam dunk but co-breeding duos left behind the same number of offspring as the birds that coupled up, while female trios left behind fewer offspring than either group.

The study, published today in the journal Proceedings of the Royal Society B, suggests that even complex cooperative breeding strategies may offer direct evolutionary benefits over an animal’s lifetime, and perhaps offers clues into how social behavior first evolved in humans and other animals.

The love life of the typical acorn woodpecker is a complex, polygamous affair. A common arrangement for a male of this species, which inhabits oak savannas from Oregon to Colombia, might be ruling over a patch of woodland alongside two of his brothers and a pair of sisters from another family that the brothers all mate and raise chicks with. Some of the group’s offspring may even hang around their childhood territory for years, not to breed with their parents or aunts and uncles, but to help raise the next generation before striking out to become breeders in other groups.

Researchers had long assumed that the woodpeckers opting for this rare form of polygamy, in which co-breeding siblings are forced to compete to mate, were making an evolutionary compromise. To researchers, this sibling rivalry seemed likely to result in individual woodpeckers leaving behind fewer offspring each year than if they had opted for a more traditional coupled pairing with a guaranteed opportunity to mate. To balance out this short-term loss of evolutionary fitness, researchers hypothesized that the woodpeckers’ polygamy must confer some indirect or long-term advantages, but quantifying those benefits in wild populations before this study had proven extremely challenging.

“For the longest time we have thought polygamous breeding was a compromise, and breeding as couples was considered the gold standard for leaving behind the highest number of chicks,” Barve said. “But you can’t really test that without super-detailed, long-term data. Fortunately, that’s exactly what we had for this study.”

The data underpinning this research spans more than 40 years and tracks 499 individual birds over their entire lifetimes at the 2,500-acre Hastings Natural History Reservation in the Carmel Valley along California’s central coast, where a rotating cast of some 150 scientists and interns has been observing acorn woodpeckers since 1968. Researchers working at the Hastings Reserve recorded each bird’s reproductive output from their first attempt to their last along with information including territory quality, group composition, social standing and genetic data linking parents to their offspring for birds hatched between 1984 and 2006.

Researchers had traditionally explained the evolution of the woodpeckers’ polygamous co-breeding with a concept known as kin selection. In this view, cooperative breeding could have arisen and perpetuated itself among the woodpeckers despite reducing the number of offspring an individual bird parented because even if a male loses out on a breeding opportunity to one of his brothers, the resulting chicks will still carry a portion of that lonely male’s shared DNA. Also, if the unmated male helps raise and support his nieces and nephews, he also increases the chances that they survive and reproduce, passing on a portion of his DNA to the next generation.

Another idea was that the polygamous birds were trading the relative certainty of parenting offspring in a couple for the increased odds of controlling a territory chock-full of acorns afforded to them by teaming up with their brothers or sisters. Strength in numbers is important for these woodpeckers because of the vicious, bloody battles they must fight to win territories with the best granaries. These granaries are trees, usually dead, that have been plugged full of thousands of acorns over many years by the woodpeckers living in their vicinity. Presiding over a granary that is well-stocked can make or break a group’s ability to reproduce during lean years when acorns are less abundant.

The multi-decade data set from the Hastings Reserve allowed Barve and his collaborators to finally assess whether breeding cooperatively was as costly as researchers had long assumed. To do this, the team compared the number of lifetime offspring produced by woodpeckers that did their breeding in pairs with the number produced by birds engaged in some form of cooperative polygamy.

The research team’s analysis revealed that individual males that bred as co-breeding duos and trios left behind 1.5-times more direct offspring than single-breeding males. The study also finds that these co-breeding males tend to spend two to three extra years as breeders compared to their paired-up counterparts, which may be responsible for the increased reproductive success over the co-breeding birds’ lifetimes.

Female woodpecker duos and single-breeders each left behind roughly the same number of young over their lifetimes, but those that bred as trios produced 2.5 fewer chicks. Barve said that while these figures for female birds might not seem as convincing, the co-breeding duos may still be leaving behind a more substantial genetic legacy than their single-breeding counterparts by helping their closely related co-breeders’ chicks survive. The same could be said of the males, which would endow cooperative breeding with even more substantial advantages.

“We thought acorn woodpeckers lost out on fitness by breeding cooperatively, but we show that breeding in these larger cooperative groups is actually better than breeding in pairs,” Barve said. “This is something that hasn’t been shown before because it’s so hard to get strong enough long-term data to really study it. In that sense, our findings also highlight the value of long-term research in animal behavior.”

Barve added that researchers may no longer need to invoke kin selection as a mechanism for how this cooperative trait evolved and persisted in acorn woodpeckers.

“Acorn woodpeckers have some of the most complicated social systems of any organism,” Barve said. “And these findings help us understand how this social system might have evolved, while opening up the possibility that cooperative breeding behaviors may be more beneficial than previously thought in other species as well. It could even help explain why sociality evolves so commonly throughout the tree of life.”