Simulation of self-driving fleets brings their deployment in cities closer 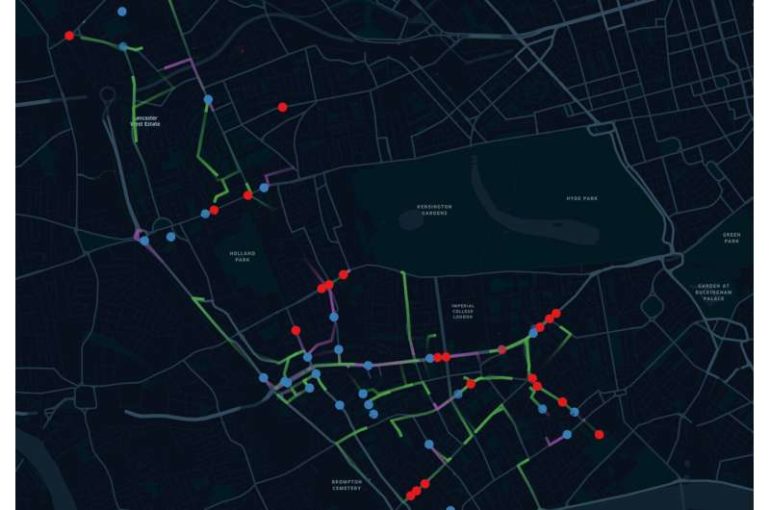 The simulations show the potential impact of fleets of autonomous vehicles (AV) on congestion, emissions, public transport and ride-sharing services.

The team analyzed tens of thousands of possible deployment scenarios using real-world data and a range of service parameters and fleet management algorithms. The aim is to ensure that such services will run efficiently and profitably while reducing knock-on effects to other modes of transport, such as active and sustainable travel, whilst bringing their deployment on city streets worldwide a step closer.

Researchers from the Transport Systems and Logistics Laboratory (TSL), part of the Department of Civil and Environmental Engineering at Imperial College London, have joined forces with AV software company Oxbotica in a project called SHIFT, funded by a £1.58 million grant awarded by the Centre for Connected and Autonomous Vehicles and delivered through Innovate UK.

Transport for London (TfL) were also consortium members, providing data to aid understanding of how the deployment of AVs could vary across different areas of London and the need for any such deployment to work towards supporting the central goal of the Mayor of London’s Transport Strategy: by 2041, 80 percent of all trips in London are to be made on foot, by cycle or using public transport and that London’s air quality is improved.

Better prepared for the future

Dr. Panagiotis Angeloudis, Reader in Transport Systems & Logistics at Imperial College London, said: “The deployment of autonomous vehicle technologies has the potential to revolutionize mobility in cities around the world. Through the SHIFT project, we had an opportunity to study their potential impacts on the rest of the transport network in an unprecedented level of detail.

“Using the tools that we developed, stakeholders can now plan better for the deployment of autonomous vehicle technologies and be better prepared for the future.”

The team modeled the impact of AV fleets using data from existing road networks and real-world travel demand patterns and built upon decades of research on passenger behavior, such as how likely someone is to choose a mode of transport over others based on price, convenience and travel times.

In time, as AVs are likely to operate throughout the day, without the need for driver breaks, there is the potential for them to waste energy and increase congestion by completing ’empty miles.” Algorithms that the team has developed can help optimize the fleet, making sure only enough vehicles are operating in the right areas to meet demand without wasting energy.

The team also simulated the impact of electrifying AVs, showing how the emissions from road transportation could be reduced.

Dr. Marc Stettler, senior lecturer in transport and environment, and one of the Imperial investigators in this project said: “Proper management of autonomous vehicle fleets is essential to minimizing energy consumption and environmental impacts. We want to take advantage of the potential to increase passenger occupancy and avoid vehicles cruising around looking for passengers, thereby reducing vehicle kilometers traveled.”

The team say their simulations have the advantage of providing a ‘digital twin’ of the operating environment, allowing the testing of different scenarios without waiting for the availability and deployment of new technologies. Therefore, it could be applied to other transport problems, such as how to electrify other forms of public transport, such as city busses, and even future developments like the deployment of autonomous air taxis.

Dr. Angeloudis said: “The motivation for deploying large fleets of AVs in cities is to reduce individual car ownership, freeing up space on the roads. For the public to choose this option, the services provided by such fleets must be reasonably priced and to accommodate their needs, responding to demand.

Telehealth continues to substitute for in-person care among older adults, but rural use lags

“To do this, the vehicles should be managed as efficiently as possible, with their deployment aligned with user demand while having minimal impact on factors like congestion and emissions. Our model will help fleet operators meet these conditions, providing multiple benefits for city dwellers.”

Minister for Investment, Lord Grimstone, said: “The potential economic and environmental benefits of automated vehicles are huge, but deploying the technology safely in the UK’s busy cities is absolutely vital in ensuring they are a success when they are brought to our streets.

“SHIFT’s guidelines help pave the way for self-driving vehicles on our roads, and are further evidence of the UK’s global leadership in shaping the automotive industry of the future as we build back greener from the pandemic.”

The TSL team will now focus on applying their simulation technology to making AV deployments even safer as part of another ongoing project called D-RISK, which will focus on developing the world’s first virtual driving test for self-driving cars.