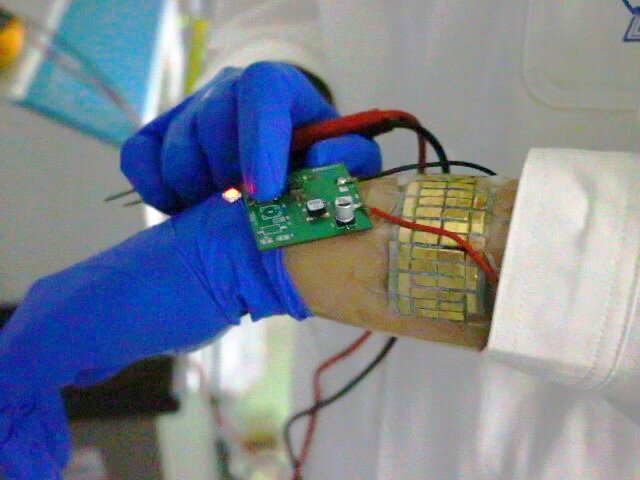 Scientists in China have developed a small, flexible device that can convert heat emitted from human skin to electrical power. In their research, presented April 29 in the journal Cell Reports Physical Science, the team showed that the device could power an LED light in real time when worn on a wristband. The findings suggest that body temperature could someday power wearable electronics such as fitness trackers.

“This is a field with great potential,” says corresponding author Qian Zhang of Harbin Institute of Technology, Shenzhen. “TEGs can recover energy that’s lost as waste heat and thus improve the rate of power utilization.”

Unlike traditional generators that use the energy of motion to produce power, thermoelectric generators have no moving parts, making them essentially maintenance free. These generators are installed on machines located in remote areas and on board space probes to supply energy.

Zhang and her colleagues have been working on designing thermoelectric generators for years. With wearable devices becoming increasingly popular in recent years, the team wanted to explore whether these reliable generators could replace traditional battery in these devices, including fitness trackers, smart watches, and biosensors.

“Don’t underestimate the temperature differences between our body and the environment—it’s small, but our experiment shows it can still generate power,” she says.

Conventional TEGs are usually rigid and can only withstand fewer than 200 instances of bending. Although the flexible kinds can meet the bending requirement, their performance tends to be inadequate. To overcome this limitation and make the device more adaptable to wearables, researchers attached the core electrical components to a stretchable and more adhesive polyurethane material. Tests showed that the device survived at least 10,000 instances of repeated bending without significant changes in performance.

In addition, commercially available TEGs rely heavily on rare metal bismuth that does not naturally occur in large quantities. The new design partially replaced it with a magnesium-based material, which can substantially lower the costs in large-scale production.

Researchers designed a prototype of a self-powered electronic system. They connected an LED to a TEG band measuring 4.5 in long and 1.1 in wide. Then, the team wrapped the TEG band around the wrist of someone whose body temperature measured at 92.9 F in ambient environmental conditions. With a temperature difference, the generator harvested heat given off from the skin and successfully lit up the LED.

“Our prototype already has good performance if it’s introduced to the market,” says corresponding author Feng Cao of Harbin Institute of Technology, Shenzhen. He adds that with the proper voltage converter, the system can power electronics such as smart watches and pulse sensors.

Looking forward, the team plans to further improve the design so the device can absorb heat more efficiently.

The tilt in our stars: The shape of the Milky Way’s halo of stars is realized

“There’s an increasing demand for greener energy, and TEGs fit right in, for they can turn wasted heat into power,” Cao says. “While, for example, solar energy can only be generated when there’s sun, TEGs can produce power in many scenarios—as long as there’s a temperature difference.”

Citation:
Small generator captures heat given off by skin to power wearable devices (2021, April 29)
retrieved 1 May 2021
from https://techxplore.com/news/2021-04-small-captures-skin-power-wearable.html