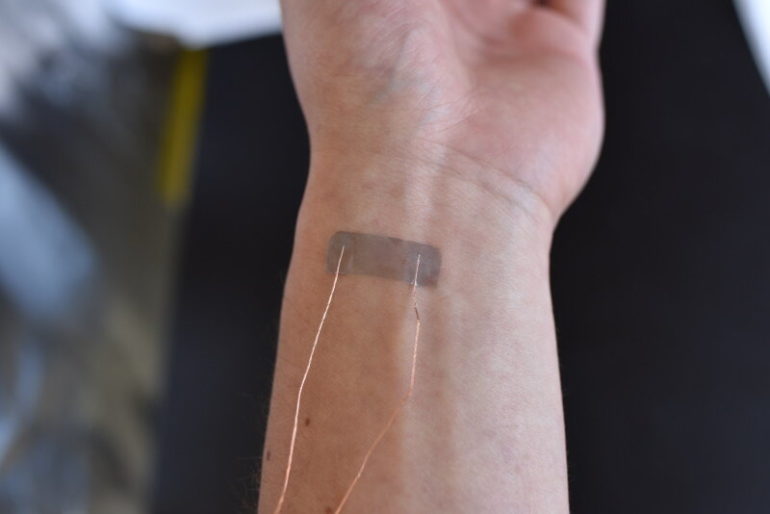 Many bodily functions in humans are manifested by mechanical deformations to the skin—from the stretching, bending and movement of muscles and joints to the flutter of a pulse at the wrist. These mechanical changes can be detected and monitored by measuring different levels of strain at various points throughout the body.

In recent years, much attention has been focused on wearable sensors to measure these strains for use in personal health monitoring. Some of these sensors can detect high-level (40-100%) strains, such as those associated with the movements of fingers and limb joints, others detect mid-level (10-40%) strains, as found in swallowing and facial movements and still others are sensitive to low-level (

Due to its highest levels of conductivity and stability, a highly-favored material for these types of sensors is PEDOT:PSS, or poly(3,4-ethylenedioxythiophene) polystyrene sulfonate. Previously, very sensitive PEDOT:PSS strain sensors have been developed that can detect strain from very minute movements (20%). Attempts to solve this problem by adding stretchy polymers, or elastomers, have resulted in increased stretchiness but decreased sensitivity in detecting small strains.

A collaborative team from the Terasaki Institute for Biomedical Innovation has addressed these challenges by designing a wearable strain sensing device that can effectively detect a wide range of strains. In order to maximize the stretchiness of this sensor, the TIBI researchers drew inspiration from an example found in nature. Snakes are well known in having the ability to stretch to multiple times their normal body size when ingesting prey. Upon closer examination of snake skin, the researchers observed that snake skin is covered with overlapping scales; when strain is applied, these scales slide past each other and are displaced into separated scales with skin interspersed among them. This confers exceptional stretchiness to the skin.

The researchers used this design concept in fabricating their sensor. A thin layer of PEDOT:PSS was applied and baked onto an elastomer tape. This layer was then stretched to an experimentally optimized 50% strain level. This process resulted in cracks and the formation of microscale pieces, or “islands” in the layer’s surface, with interspersing areas of PEDOT:PSS. These exposed areas served as bonding sites for the application of a second thin layer of PEDOT:PSS. Once applied, the second layer was further stretched to a 100% strain level, resulting in the creation of additional islands and areas which naturally aligned with those of the first layer. When released from stretching, a structure was created with overlapping islands that mimicked the scaly structure of a snake.

“The key point in the development of this sensor is its novel structural design,” said lead researcher Shiming Zhang, Ph.D. “It makes it possible for our device to measure a wide range of strain levels with a high degree of sensitivity.”

The PEDOT:PSS bilayer was affixed atop a layer of hydrogel; the soft, gelatinous hydrogel was chosen for this underlayer, as it would rest on the skin of the subject and offer biocompatibility and wearable comfort. Copper wires and an elastomer seal were added to the sensor and various experiments were conducted to test its ability to detect a wide range of strains.

The results of the experiments showed that the TIBI sensor yielded clearly defined signals with a sensitivity range of two orders of magnitude. The signals accurately reflected the degrees and angles of the corresponding movements that were detected. In addition, the sensor demonstrated excellent conductivity, durability and reproducibility.

The versatility of this wide-ranging wearable sensor can be applied to myriad biomedical needs, such as in monitoring cardiac or circulatory functions, aiding subjects with difficulties in vocalization or swallowing, or in the physical rehabilitation and evaluation of athletic performance. It can also be used in such creative applications as improving communication for those who work in noisy environments or in monitoring psychological conditions associated with facial expressions.

“The structural design principles demonstrated here are a true advancement in wearable health monitoring,” said Ali Khademhosseini, Ph.D., Director and CEO of TIBI. “It exemplifies the creative and forward thinking of our researchers in developing personalized sensing devices.”