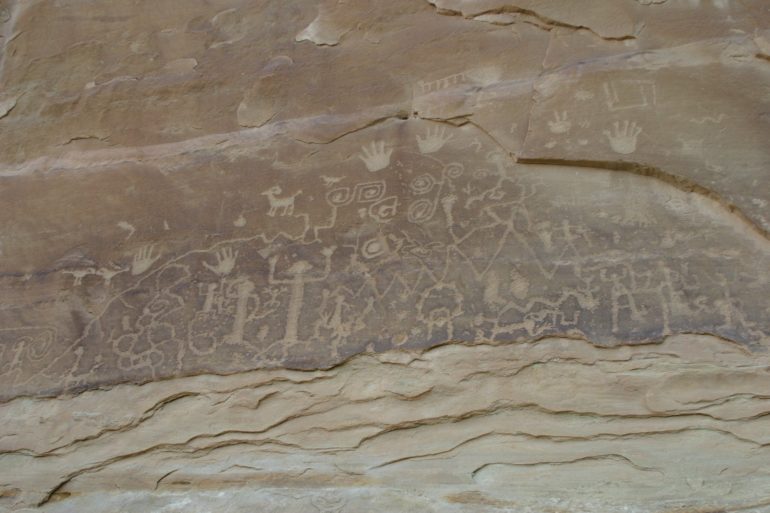 Wander around a desert most anywhere in the world, and eventually you’ll notice dark-stained rocks, especially where the sun shines most brightly and water trickles down or dew gathers. In some spots, if you’re lucky, you might stumble upon ancient art—petroglyphs—carved into the stain. For years, however, researchers have understood more about the petroglyphs than the mysterious dark stain, called rock varnish, in which they were drawn.

In particular, science has yet to come to a conclusion about where rock varnish, which is unusually rich in manganese, comes from.

Now, scientists at the California Institute of Technology, the Department of Energy’s SLAC National Accelerator Laboratory and elsewhere think they have an answer. According to a recent paper in Proceedings of the National Academy of Sciences, rock varnish is left behind by microbial communities that use manganese to defend against the punishing desert sun.

The mystery of rock varnish is old, said Usha Lingappa, a graduate student at Caltech and the study’s lead author. “Charles Darwin wrote about it, Alexander von Humboldt wrote about it,” she said, and there is a long-standing debate about whether it has a biological or inorganic origin.

But, Lingappa said, she and her colleagues didn’t actually set out to understand where rock varnish comes from. Instead, they were interested in how microbial ecosystems in the desert interact with rock varnish. To do so, they deployed as many techniques as they could come up with: DNA sequencing, mineralogical analyses, electron microscopy, and—aided by Stanford Synchroton Radiation Lightsource (SSRL) scientist Samuel Webb—advanced X-ray spectroscopy methods that could map different kinds of manganese and other elements within samples of rock varnish.

“By combining these different perspectives, maybe we could draw a picture of this ecosystem and understand it in new ways,” Lingappa said. “That’s where we started, and then we just stumbled into this hypothesis” for rock varnish formation.

Among the team’s key observations was that, while manganese in desert dust is usually in particle form, it was deposited in more continuous layers in varnish, a fact revealed by X-ray spectroscopy methods at SSRL that can tell not only what chemical compounds make up a sample but also how they are distributed, on a microscopic scale, throughout the sample.

That same analysis showed that the kinds of manganese compounds in varnish were the result of ongoing chemical cycles, rather than being left out in the sun for millennia. That information, combined with the prevalence of bacteria called Chroococcidiopsis that use manganese to combat the oxidative effects of the harsh desert sun, led Lingappa and her team to conclude that rock varnish was left behind by those bacteria.

For his part, Webb said that he always enjoys a manganese project—”I’ve been a mangaphile for a while now”—and that this project arrived at the perfect time, given advances in X-ray spectroscopy at SSRL. Improvements in X-ray beam size allowed the researchers to get a finer-grained picture of rock varnish, he said, and other improvements ensured that they could get a good look at their samples without the risk of damaging them. “We’re always tinkering and fine-tuning things, and I think it was the right time for a project that maybe 5 or 10 years ago wouldn’t really have been feasible.”