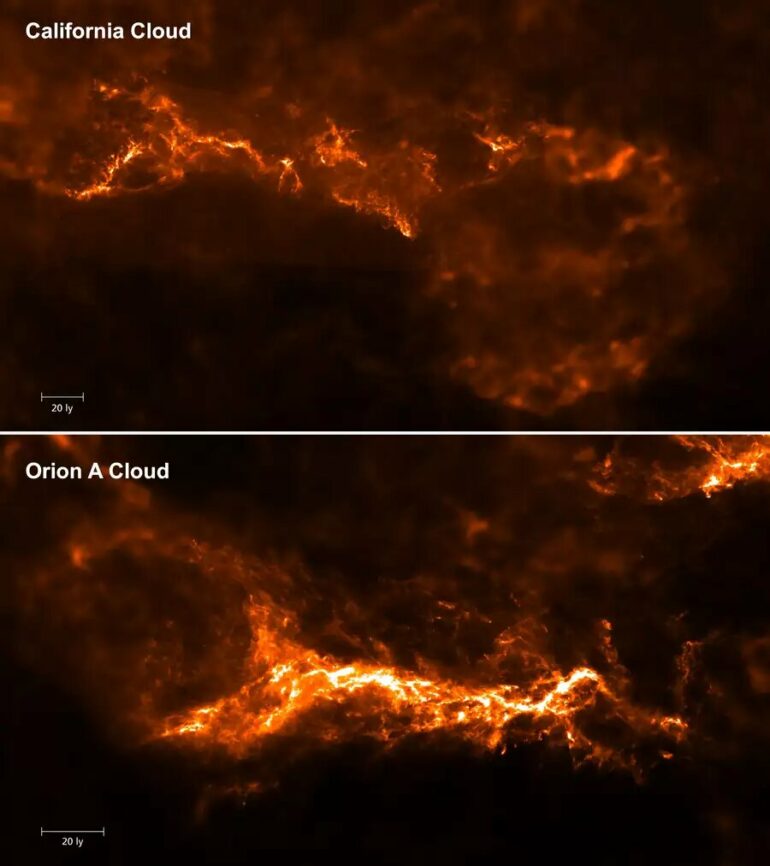 Using tens of thousands of stars observed by the Gaia space probe, astronomers from MPIA and Chalmers have revealed the 3D shapes of two large star-forming molecular clouds, the California Cloud and the Orion A Cloud. In conventional 2D images, they appear similarly structured, containing filaments of dust and gas with seemingly comparable densities. In 3D, however, they look quite distinct. In fact, their densities are much more different than their images projected on the plane of the sky would suggest. This result solves the long-standing mystery of why these two clouds form stars at different rates.

Cosmic clouds of gas and dust are the birthplaces of stars. More specifically, stars form in the densest pockets of such material. The temperatures drop to near absolute zero, and the densely packed gas collapses under its own weight, eventually forming a star. “Density, the amount of matter compressed into a given volume, is one of the crucial properties that determine star formation efficiency,” says Sara Rezaei Khoshbakht. She is an astronomer at Max Planck Insitute for Astronomy in Heidelberg, Germany and the main author of a new article published in The Astrophysical Journal Letters today.

In a pilot study portrayed in this article, Sara Rezaei Khoshbakht and co-author Jouni Kainulainen have applied a method which allows them to reconstruct 3D morphologies of molecular clouds to two giant star-forming clouds. Kainulainen is a scientist at the Chalmers University of Technology in Gothenburg, Sweden who used to work at MPIA as well. Their targets were the Orion A Cloud and the California Cloud.

Usually, measuring the density within clouds is hard. “Everything we see when we observe objects in space is their two-dimensional projection on an imaginary celestial sphere,” explains Jouni Kainulainen. He is an expert on interpreting the influence of cosmic matter on stellar light and calculating densities from such data. Kainulainen adds, “Conventional observations lack the necessary depth. Therefore, the only density we usually can infer from such data is the so-called column density.”

The column density is the mass added along a line of sight divided by the projected cross-section. Hence, those column densities do not necessarily reflect the actual densities of molecular clouds, which is problematic when relating cloud properties to star formation activity. Indeed, the images of the two clouds investigated in this work that show the thermal dust emission apparently share similar structures and densities. However, their vastly different star-forming rates have been puzzling astronomers for many years.

Instead, the new 3D reconstruction now shows that those two clouds are not that alike after all. Despite the filamentary appearance the 2D images portray, the California Cloud is a flat and nearly 500 light-years long sheet of material with a large bubble that extends below. Thus, one cannot attribute a single distance to the California Cloud, which has significant repercussions for interpreting its properties. From our perspective on Earth, it is oriented almost edge-on, which only simulates a filamentary structure. As a result, the sheet’s actual density is much lower than the column density suggests, explaining the discrepancy between the previous density estimates and the cloud’s star formation rate.

And what does the Orion A Cloud look like in 3D? The team confirmed its dense filamentary structure seen in the 2D images. However, its actual morphology also differs from what we see in 2D. Orion A is rather complex, with additional condensations along the prominent ridge of gas and dust. On average, Orion A is much denser than the California Cloud, explaining its more pronounced star formation activity.

Sara Rezaei Khoshbakht, also affiliated with the Chalmers University of Technology, developed the 3D reconstruction method during her Ph.D. at MPIA. It involves analyzing the alteration of stellar light when passing through those clouds of gas and dust as measured by the Gaia space probe and other telescopes. Gaia is a European Space Agency (ESA) project whose primary purpose is to precisely measure the distances to over a billion stars in the Milky Way. Those distances are crucial for the 3D reconstruction method.

“We analyzed and cross-correlated the light from 160,000 and 60,000 stars for the California and Orion A Clouds, respectively,” says Sara Rezaei Khoshbakht. The two astronomers reconstructed the cloud morphologies and densities at a resolution of only 15 light-years. “This is not the only approach astronomers employ to derive spatial cloud structures,” Rezaei Khosbakht adds. “But our’s produces robust and reliable results without numerical artifacts.”

This study proves its potential to improve star formation research in the Milky Way by adding a third dimension. “I think one important outcome of this work is that it challenges studies that rely solely on column density thresholds to derive star formation properties and to compare them with one another,” Sara Rezaei Khoshbakht concludes.

However, this work is only the first step of what the astronomers want to achieve. Sara Rezaei Khoshbakht pursues a project that ultimately will produce the spatial distribution of dust in the entire Milky Way and uncover its connection to star formation.