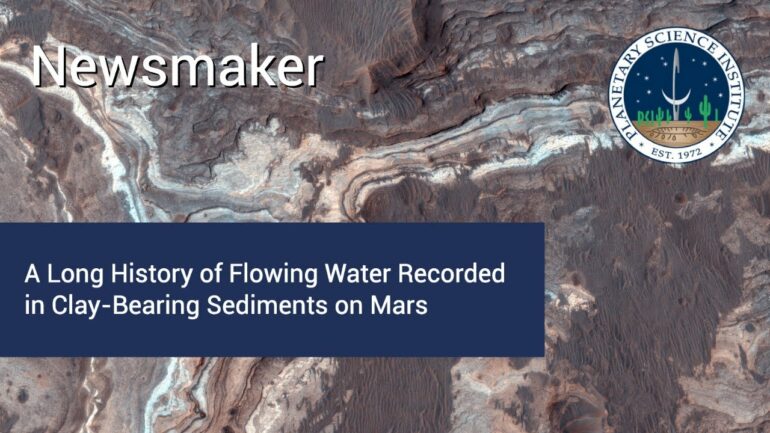 A region on Mars may have been repeatedly habitable until relatively late in Martian history, says a new paper by Planetary Science Institute Senior Scientist Catherine Weitz.

Some of the most extensively preserved landforms on Mars created by running water on its surface are found within the Margaritifer Terra region where deposits of clay-bearing sediments have been identified. “The presence of clays indicates an environment favorable for life because clays form and remain stable under neutral pH conditions where water persists long-term that minimizes evaporation to form other minerals like sulfates,” Weitz said.

“We found that the Ladon basin region within Margaritifer Terra records a long history of flowing water beginning relatively early in Mars history around 3.8 billion years ago that continued until up to 2.5 billion years ago, which is considered relatively recent,” said Weitz, lead author of “Clay Sediments Derived from Fluvial Activity in and around Ladon basin, Mars” that appears in the journal Icarus.

“Using orbital images, we identified clay-bearing sediments within northern Ladon Valles, southern Ladon basin, and the southwestern highlands around Ladon basin,” Weitz said. “In addition, colorful light-toned layered sediments that display relatively low bedding dips and contain clays across 200 kilometers in distance are evidence that a lake was most likely present within Ladon basin and northern Ladon Valles. The low-energy lake setting and presence of clays support an environment that would have been favorable to life at that time.”

The clays initially formed in older highland terrains around Ladon basin and then subsequently water eroded through these clay-bearing highland materials to produce the Ladon Valles channel and then deposited sediments downstream into a lake within Ladon basin and northern Ladon Valles. The most recent and youngest water flow in the highlands is along southwestern Ladon basin where clays were deposited within blocked valleys and small topographic basins that are of similar age but smaller scale relative to the Eberswalde delta deposit located to the south of the region of this study. “Our results indicate that the clay sediments deposited by running water in Eberswalde were not unusual during this more recent time because we see many examples of similar young valleys that deposited clays in the region,” Weitz said.