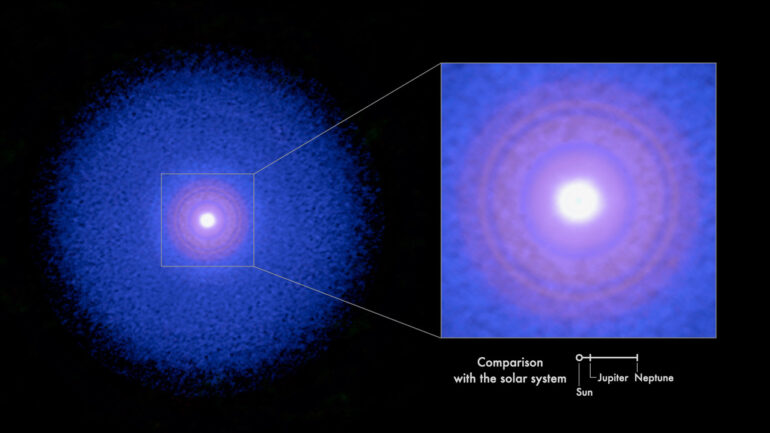 Astronomers have found a way to directly measure the amount of gas in protoplanetary disks without needing to make assumptions about the relative amounts of different types of gas, making this method more accurate and robust than previous methods.

A team led by Tomohiro Yoshida, a graduate student at the Graduate University for Advanced Studies in Japan, searched the Atacama Large Millimeter/submillimeter Array (ALMA) archival data for observations of the nearest protoplanetary disk, around the star TW Hydrae. From this, they produced a radio image 15 times more sensitive than previous studies, allowing them to examine not only the wavelengths of the spectral lines, but also their shapes.

From the shape of the carbon monoxide lines, the team was able to measure the gas pressure near the center of the disk. This pressure reveals the total mass of gas near the center, without needing to make any assumptions about the ratio of hydrogen to carbon monoxide. The team found that despite being near the end of the planet formation process, there is still enough gas in the inner region of the TW Hydrae system to make a Jupiter-sized planet.

Yoshida, the lead author of this study, says “We would like to apply this novel technique to other disks and investigate the amount of gas in planet-forming disks with various characteristics and at various ages to clarify the gas dissipation process and the formation process of planetary systems.”

These results appeared as “Discovery of Line Pressure Broadening and Direct Constraint on Gas Surface Density in a Protoplanetary Disk” in The Astrophysical Journal Letters on September 22, 2022.