A solar illusion: Coronal loops may not be what they seem 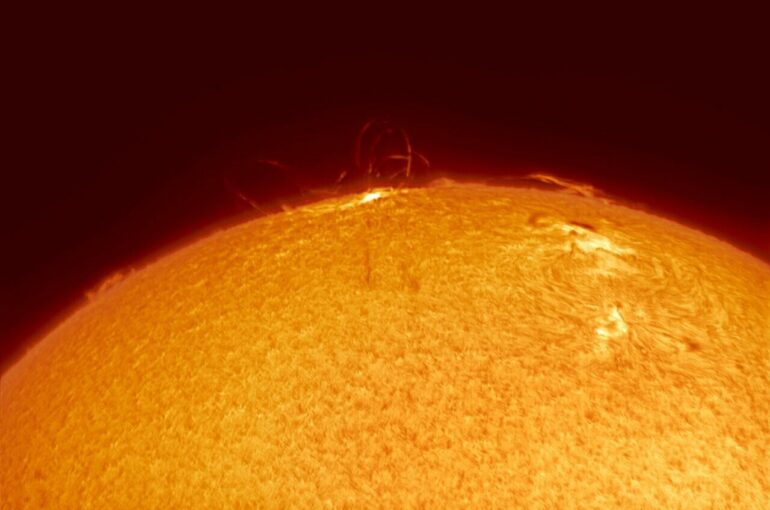 Many coronal loops—ropey strands of plasma that scientists have long thought existed in the Sun’s atmosphere—may actually be optical illusions, according to a new paper that challenges prevailing assumptions of what we know, and don’t know, about the Sun.

The research, led by the National Center for Atmospheric Research (NCAR) and published in The Astrophysical Journal, relied on a cutting-edge, realistic 3D simulation of the solar corona. The simulation, carried out at NCAR several years ago, allowed the scientists to slice the corona in distinct sections in an effort to isolate individual coronal loops.

What they found is that many of the loops weren’t loops at all.

While the research team was able to pinpoint some of the coronal loops they were looking for, they also found that in many cases what appear to be loops in images taken of the Sun may actually be wrinkles of bright plasma in the solar atmosphere. As sheets of bright plasma fold over themselves, the folds look like bright thin lines, mimicking the look of distinct and self-contained strands of plasma.

The findings, which the research team is calling the “coronal veil” hypothesis, have significant implications for our understanding of the Sun, since the presumed coronal loops have been used for decades as a way to infer information about density, temperature, and other physical characteristics of the solar atmosphere.

“I have spent my entire career studying coronal loops,” said NCAR scientist Anna Malanushenko, who led the study. “I was excited that this simulation would give me the opportunity to study them in more detail. I never expected this. When I saw the results, my mind exploded. This is an entirely new paradigm of understanding the Sun’s atmosphere.”

The research was funded by NASA and included collaborators from NCAR’s High Altitude Observatory, Lockheed Martin Solar and Astrophysics Laboratory, the Southwest Research Institute, and NASA Goddard. NCAR is sponsored by the National Science Foundation.

What appears to be coronal loops can be seen in images taken of the Sun in extreme ultraviolet light. The assumption that they exist is a natural one for scientists because it fits our most basic understanding of magnetism.

Most schoolchildren have at some point seen what happens when iron filings are sprinkled near a bar magnet. The filings orient themselves along magnetic field lines that loop from one pole of the bar magnet to the other. These curving lines spread out, becoming weaker and less dense, the further they are from the magnet.

The apparent coronal loops in images of the Sun look strikingly similar, and since there is a significant magnetic field in the Sun, the existence of magnetic field lines that could trap a rope of plasma between them and create loops seems like an obvious explanation. And in fact, the new study confirms that such loops likely exist.

However, the coronal loops seen on the Sun have never behaved exactly as they should, based on our understanding of magnets. For example, scientists would expect the magnetic field lines on the Sun to spread apart, just as in the iron filings experiment, as you move higher in the corona. If this happened, the plasma trapped between the field lines would also spread out between the boundaries, creating thicker, less bright loops. But images of the Sun do not show this phenomenon. Instead, the loops further out still appear thin and bright.

The possibility that these loops are instead wrinkles in a coronal veil helps explain this and other discrepancies with our expectations of the loops—but it also asks new questions. For example, what determines the shape and thickness of the folds? And how many of the apparent loops in images of the Sun are actually real strands, and how many are optical illusions?

“This study reminds us as scientists that we must always question our assumptions and that sometimes our intuition can work against us,” Malanushenko said.

The discovery that coronal loops may be illusions was made possible thanks to an extremely detailed simulation of the solar corona produced by MURaM, a radiative magnetohydrodynamic model that was extended to model the solar corona in an effort led by NCAR.

The simulation was groundbreaking when it was first produced because it was able to simultaneously model what was happening in multiple regions of the Sun, from the upper part of the convective zone—about 10,000 kilometers below the Sun’s surface—through the solar surface and beyond, up to nearly 40,000 kilometers into the solar corona. These varied regions of the Sun cover a vast range of physical conditions, including differences in density and pressure, and so scientists had not previously figured out a way to mathematically represent these regions in a unified simulation.

Among other results, the new simulation was able to capture the entire life cycle of a solar flare for the first time, from the build up of energy below the solar surface to the emergence of flare at the surface, and finally to the explosive release of energy.

The model also produced three-dimensional data sets that contain the structure of the magnetic field and plasma, which can be used to generate “synthetic” observations. Because the solar corona is optically thin—meaning it’s relatively easy to see through it—structures in the corona overlap one another in images of the Sun. This makes it difficult to tell whether a “loop” that is overlapping other loops is in front or behind. It’s also difficult to tell whether the loop itself has a compact cross section, like a garden hose, or resembles a long ribbon viewed edge on. It’s also possible that what appears to be a thin strand may be an optical artifact caused by a fold in a sheet of bright plasma.

The cubes of data produced by MURaM provide scientists the opportunity to dissect the solar atmosphere and study the overlapping structures separately, something that is not possible with the observatories and instruments we currently have.

While the MURaM simulation is one of the most realistic ever created of the solar corona, it’s still just a model. Understanding how many coronal loops are actually optical illusions will require carefully designed observational methods that probe the corona and new data analysis techniques.

“We know that designing such techniques would be extremely challenging, but this study demonstrates that the way we currently interpret the observations of the Sun may not be adequate for us to truly understand the physics of our star,” Malanushenko said.


Citation:
A solar illusion: Coronal loops may not be what they seem (2022, March 2)