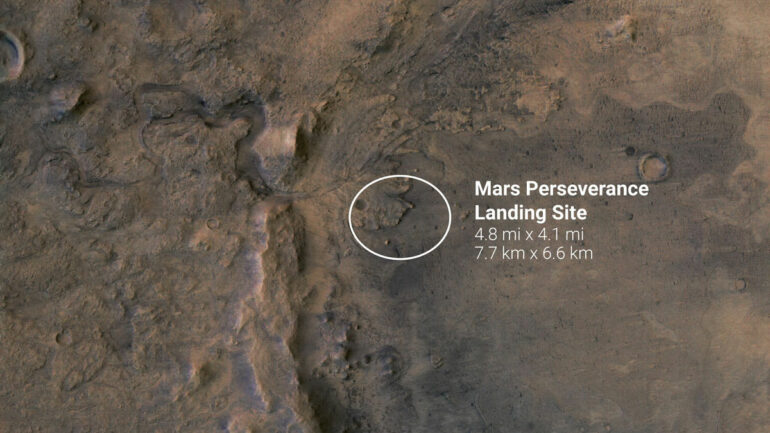 Prospective Mars explorers can now take a hike around the landing site of NASA’s Mars 2020 Perseverance rover with an interactive map loaded with orbital imagery, terrain data as well as synthetic and real 3D panoramic views of Jezero crater and its surrounding area. The map, which can be accessed through a normal web browser, has been presented today at the Europlanet Science Congress (EPSC) 2022 in Granada, Spain, by Sebastian Walter of the Freie Universität Berlin.

“The map is the perfect tool for planning a future visit to Mars, with an interactive interface where you can choose from different available base datasets. Some of the slopes are pretty steep, so watch out for those if you want to avoid too much oxygen consumption!” said Sebastian Walter.

“To get a real feeling of what to expect on your future Mars trip, you can click on one of the waypoint marker symbols to enter either a fullscreen 3D view or, if you have a Virtual Reality setup, to enter a fully immersive environment. You can even listen to the sounds of the rover if you stand close by, but please don’t touch it—otherwise you would contaminate the probes.”

The map allows virtual hikers to zoom in and out, and pan rapidly across scenes, so that they can explore the landscape from large scales down to centimeter-detail. Some of the 360° panoramas integrated with the waypoints have been synthetically rendered from orbital image data.

Others are real panoramas stitched together from a multitude of single images taken by the Mastcam-Z camera instrument onboard the Mars 2020 Rover Perseverance, which have been provided by the University of Arizona. The sounds have been recorded by the SuperCam instrument on that same rover mission.

The base layer of the map is a merged dataset derived from three different instruments currently orbiting Mars: the HRSC on Mars Express, and the Context Camera (CTX) and High Resolution Imaging Science Experiment (HiRISE) instruments on Mars Reconnaissance Orbiter (MRO). The HiRISE data has been provided by provided by the Terrain Relative Navigation (TRN) team of the Jet Propulsion Laboratory (JPL).

The Jezero map builds on the data portal of the High Resolution Stereo Camera (HRSC) instrument of ESA’s Mars Express mission, which provides tools to visualize and disseminate large amounts of Mars images and terrain data in an online environment.

“Initially we created the Jezero map as an outreach application to complement the HRSC Mapserver tool, which supports professional scientists to explore the Martian surface,” said Sebastian Walter. “But as the rover returns more and more high-resolution image data and even audio recordings, it turns out to be the perfect tool for immersive visualization of that data in a scientific context by itself.”