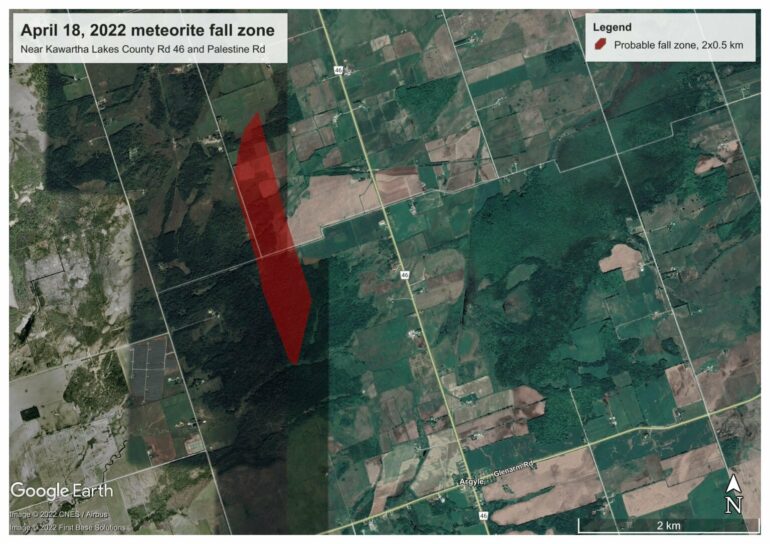 A bright fireball was observed by a network of all-sky cameras across southern Ontario at 11:37pm on Sunday, April 17, 2022. Analysis of the video data suggests that fragments of the meteor are likely to have made it to the ground near the eastern shore of Lake Simcoe, just north of the town of Argyle.

Western University’s physics and astronomy department runs an all-sky camera network that constantly monitors the sky for meteors. Denis Vida, who specializes in the study of meteors, confirmed that more than a dozen all-sky cameras of Western’s Southern Ontario Meteor Network (SOMN) captured the event north of Toronto late Sunday evening as did a number of citizen scientist-operated cameras from the Global Meteor Network (GMN).

“This fireball was particularly significant because it was moving slowly, was on an asteroidal orbit and ended very low in the atmosphere. These are all good indicators that material survived,” says Vida, an astronomy postdoctoral associate.

In fact, the fireball was still producing light at just 29 km altitude. Another factor which strongly favors survival of meteorites, includes the very steep entry angle (about 30 degrees from the vertical).

“Taken together, these factors suggest many small meteorites have made it to the ground,” says Vida.

This event is equally important because Western’s meteor research group has good-quality video data of its passage through the atmosphere so they can calculate rock’s origin in our solar system. Preliminary results indicate that the fireball first became visible at an altitude of 90km and traveled almost due north.

“The initial mass is believed to have been around 10 kilograms and we would expect tens to hundreds of grams of material on the ground,” says Vida. “Meteorites are of great interest to researchers as studying them helps us to understand the formation and evolution of the solar system,” says Vida.

Meteorites can be recognized by their dark, often scalloped exterior. Usually they will be denser than a “normal” rock and will often be attracted to a magnet due to their metal content. Meteorites are not dangerous, but if recovered, it is best to place them in a clean plastic bag or wrap them in aluminum foil. They should also be handled as little as possible to help preserve their scientific value. In Canada, meteorites belong to the owner of the land upon which they are found. If individuals plan to search, they should always obtain permission of the land-owner before venturing onto private land.

Researchers discover what happens on the bright side of the moon