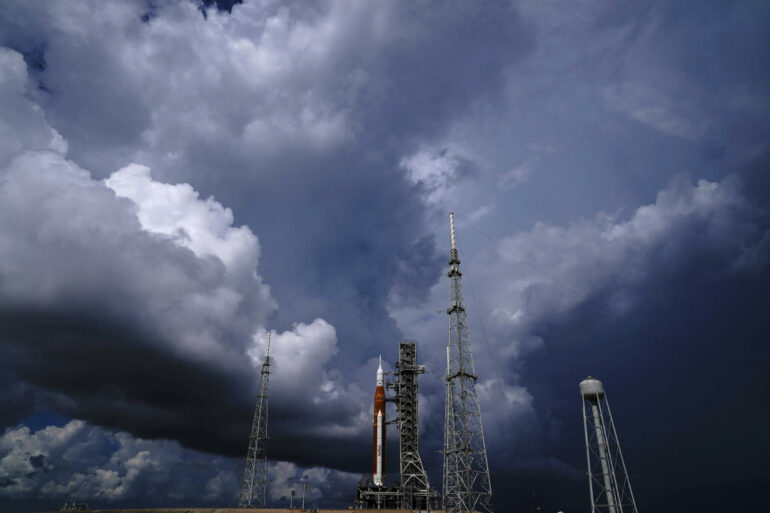 An approaching storm threatens to delay NASA’s next launch attempt for its new moon rocket, already grounded for weeks by fuel leaks.

A tropical depression in the southern Caribbean is moving toward Florida and could become a major hurricane.

Managers on Friday declared that the rocket is now ready to blast off on its first test flight, after overcoming more hydrogen leaks during a fueling test earlier in the week. It will be the first time a crew capsule orbits the moon in 50 years; the spacecraft will carry mannequins but no astronauts.

Teams will keep monitoring the forecast and decide no later than Saturday whether to not only delay the test flight, but haul the rocket off the pad and back to the hangar. It’s unclear when the next launch attempt would be—whether October or even November—if the rocket must seek shelter indoors.

The preference is to remain at the launch pad and try for a Tuesday liftoff, “but there are still some uncertainties in the forecast,” said NASA’s Tom Whitmeyer, deputy associate administrator for exploration systems.

It takes three days of preparations to get the rocket back into Kennedy Space Center’s mammoth Vehicle Assembly Building, a 4-mile (6.4-kilometer) trip lasting several hours.

“I don’t think we’re cutting it close,” Whitmeyer told reporters. “We’re just taking it a step at a time.”

This would be the third launch attempt for the Space Launch System rocket, the most powerful ever built by NASA. Fuel leaks and other technical problems scrapped the first two tries, in late August and early September.

Although hydrogen fuel seeped past newly installed seals during Wednesday’s dress rehearsal, the launch team got the leakage down to acceptable levels by slowing the flow and reducing the pressure in the lines. That gave the launch team the confidence to proceed with a Tuesday launch attempt, officials said.

Also, the Space Force has extended the certification of on-board batteries that are part of the flight safety system—at least through the beginning of October.

NASA has just two chances to launch the rocket—Tuesday and Oct. 2—before a two-week blackout period begins. The next launch period would open Oct. 17.

Astronauts would climb aboard for the second test flight around the moon in 2024. The third mission, targeted for 2025, would see a pair of astronauts landing on the moon.