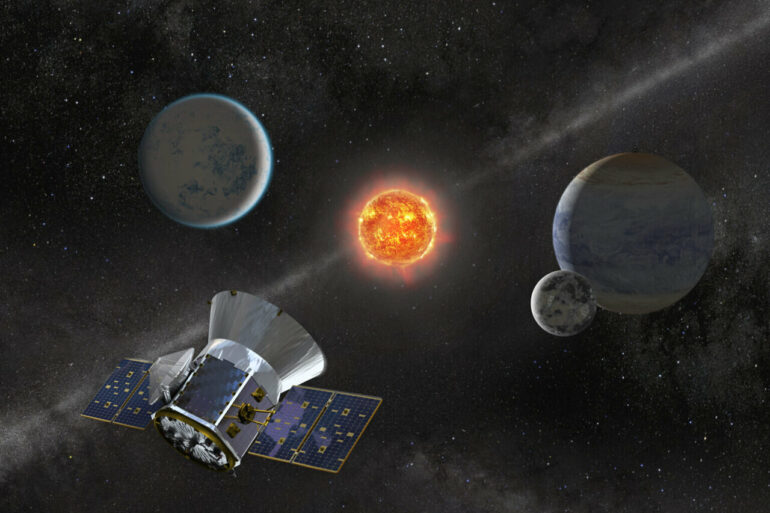 A team of astronomers have made the discovery of a lifetime that will help answer burning questions on the evolution of stars. The group is led by Evolutionary Studies Initiative member and Stevenson Professor of Physics and Astronomy, Keivan Stassun.

Stassun’s team generated a new model that greatly improved the way stars are measured in 2017.

“Being able to combine all of the different types of measurements into one coherent analysis was certainly key to being able to decipher the various unusual characteristics of this star system,” Stassun said.

The model helps predict the types of planets orbiting distant stars—called exoplanets. It has been used to identify the characteristics of more than 100 stars found by the TESS space telescope and 1,000s of others. But nothing prepared the team for what this new binary star system—which is actually two stars orbiting each other—could tell them about our universe.

According to Stassun, “This type of star is so extremely unusual that, frankly, we would not have thought to go looking for it—nobody has seen one before!”

Stassun explained how several key ingredients make this binary star system incredibly rare. Binary star systems are not uncommon among the cosmos, but one uncommon trait of this one is its orientation. When viewed from Earth, the stars eclipse each other. This allows researchers to calculate important qualities of the two stars more easily, like their mass and luminosity.

Also, stars can change size and luminosity in a process known as pulsating, and studies of these pulsations allow astronomers to probe the inner workings of stars, akin to Earth scientists using earthquake vibrations to study the Earth’s internal structure. Two rare types of stellar pulsating exist, each of which provides a different, complementary view of stellar interiors. One of the stars in this binary star system that Stassun’s team found exhibits a hybrid of both.

Next, this unique star has a strong magnetic field, which is decidedly uncommon for a hybrid pulsating star, and which could be a key missing ingredient in current theories for understanding the earliest stages of stellar evolution.

Finally, according to Stassun, “this is the first time that one of these rare magnetic hybrid pulsating stars has been found that is part of a star cluster and that is moreover a part of an eclipsing binary system. It seems quite unlikely that TESS will discover another star that has all of these attributes together.”

Graduate student Dax Feliz, also played a major role in this project. He joined the lab as a fellow through the Fisk-Vanderbilt Masters-to-Ph.D. Bridge Program.

According to Feliz, “the discovery of this rare eclipsing binary star system provides a fantastic test bed for understanding how stellar binaries evolve over time. As the TESS mission continues observing large patches of sky, star systems like HD 149834 which are located in star clusters can help us further our understanding of stellar evolution.”

The team received plenty of help from the Frist Center for Autism and Innovation. The center, founded by Stassun in 2018, works to understand and promote neurodiverse talents.

When asked about the center’s contribution, Stassun said, “we have students and interns who have expertise with data visualization, and that process is becoming increasingly important for detecting rare patterns in data, such as extreme—and extremely interesting – ‘outliers’ such as the system we discovered in this study.”

The research was published in The Astrophysical Journal.