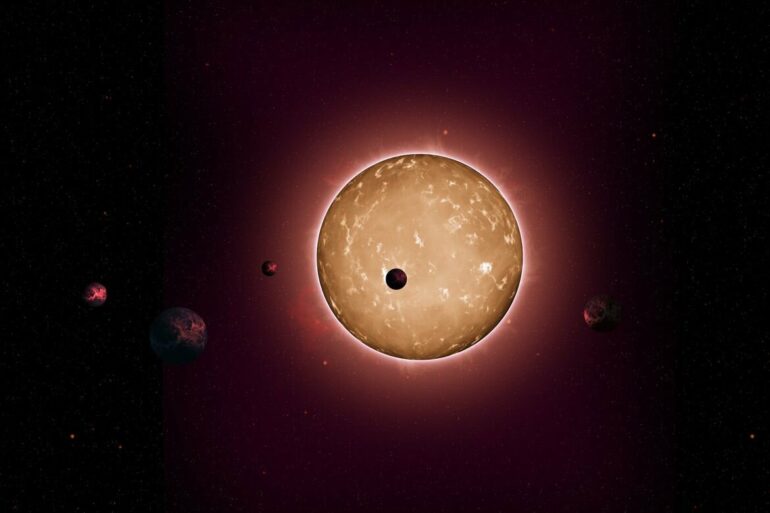 UCLA astronomers have identified 366 new exoplanets, thanks in large part to an algorithm developed by a UCLA postdoctoral scholar. Among their most noteworthy findings is a planetary system that comprises a star and at least two gas giant planets, each roughly the size of Saturn and located unusually close to one another.

The discoveries are described in a paper published today in the Astronomical Journal.

The term “exoplanets” is used to describe planets outside of our own solar system. The exoplanets that have been identified by astronomers number fewer than 5,000 in all, so the identification of hundreds of new ones is a significant advance. Studying such a large new group of bodies could help scientists better understand how planets form and orbits evolve, and it could provide new insights about how unusual our solar system is.

“Discovering hundreds of new exoplanets is a significant accomplishment by itself, but what sets this work apart is how it will illuminate features of the exoplanet population as a whole,” said Erik Petigura, a UCLA astronomy professor and co-author of the research.

The paper’s lead author is Jon Zink, who earned his doctorate from UCLA in June and is currently a UCLA postdoctoral scholar. He and Petigura, as well as an international team of astronomers called the Scaling K2 project, identified the exoplanets using data from the NASA Kepler Space Telescope’s K2 mission.

The discovery was made possible by a new planet detection algorithm that Zink developed. One challenge in identifying new planets is that reductions in stellar brightness may originate from the instrument or from an alternative astrophysical source that mimics a planetary signature. Teasing out which ones are which requires extra investigation, which traditionally has been extremely time consuming and can only be accomplished through visual inspection. Zink’s algorithm is able to separate which signals indicate planets and which are merely noise.

“The catalog and planet detection algorithm that Jon and the Scaling K2 team came devised is a major breakthrough in understanding the population of planets,” Petigura said. “I have no doubt they will sharpen our understanding of the physical processes by which planets form and evolve.”

Kepler’s original mission came to an unexpected end in 2013 when a mechanical failure left the spacecraft unable to precisely point at the patch of sky it had been observing for years.

But astronomers repurposed the telescope for a new mission known as K2, whose objective is to identify exoplanets near distant stars. Data from K2 is helping scientists understand how stars’ location in the galaxy influences what kind of planets are able to form around them. Unfortunately, the software used by the original Kepler mission to identify possible planets was unable to handle the complexities of the K2 mission, including the ability to determine the planets’ size and their location relative to their star.

Previous work by Zink and collaborators introduced the first fully automated pipeline for K2, with software to identify likely planets in the processed data.

For the new study, the researchers used the new software to analyze the entire dataset from K2—about 500 terabytes of data encompassing more than 800 million images of stars—to create a “catalog” that will soon be incorporated into NASA’s master exoplanet archive. The researchers used UCLA’s Hoffman2 Cluster to process the data.

In addition to the 366 new planets the researchers identified, the catalog lists 381 other planets that had been previously identified.

Zink said the findings could be a significant step toward helping astronomers understand which types of stars are most likely to have planets orbiting them and what that indicates about the building blocks needed for successful planet formation.

“We need to look at a wide range of stars, not just ones like our sun, to understand that,” he said.

The discovery of the planetary system with two gas giant planets was also significant because it’s rare to find gas giants—like Saturn in our own solar system—as close to their host star as they were in this case. The researchers cannot yet explain why it occurred there, but Zink said that makes the finding especially useful because it could help scientists form a more accurate understanding of the parameters for how planets and planetary systems develop.

“The discovery of each new world provides a unique glimpse into the physics that play a role in planet formation,” he said.