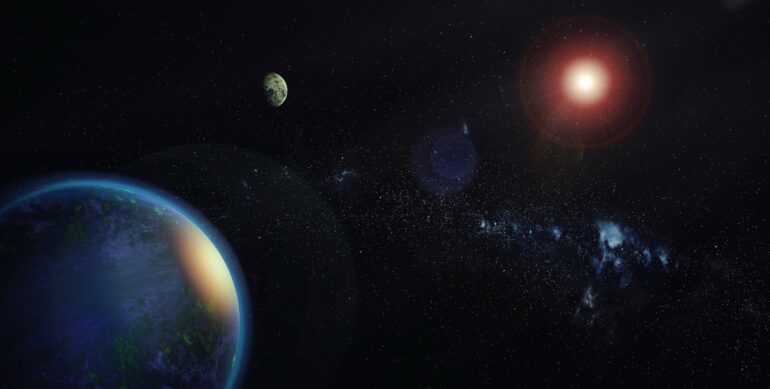 An international scientific team led by researchers at the Instituto de Astrofísica de Canarias (IAC) has discovered the presence of two planets with Earth-like masses in orbit around the star GJ 1002, a red dwarf not far from the solar system. Both planets are in the habitability zone of the star

“Nature seems bent on showing us that Earth-like planets are very common. With these two we now know 7 in planetary systems quite near to the sun,” explains Alejandro Suárez Mascareño, an IAC researcher, who is the first author of the study accepted for publication in Astronomy & Astrophysics.

The newly discovered planets orbit the star GJ 1002, which is at a distance of less than 16 light years from the solar system. Both of them have masses similar to that of the Earth, and they are in the habitability zone of their star. GJ 1002b, the inner of the two, takes little more than 10 days to complete an orbit around the star, while GJ 1002c needs a little over 21 days.

“GJ 1002 is a red dwarf star, with barely one eighth the mass of the sun. It is quite a cool, faint star. This means that its habitability zone is very close to the star,” explains Vera María Passegger, a co-author of the article and an IAC researcher.

The proximity of the star to our solar system implies that the two planets, especially GJ 1002c, are excellent candidates for the characterization of their atmospheres based either on their reflected light, or on their thermal emission.

“The future ANDES spectrograph for the ELT telescope at ESO in which the IAC is participating, could study the presence of oxygen in the atmosphere of GJ 1002c,” notes Jonay I. González Hernández, an IAC researcher who is a co-author of the article. In addition, both planets satisfy the characteristics needed for them to be objectives for the future LIFE mission, which is presently in a study phase.

The discovery was made during a collaboration between the consortia of the two instruments ESPRESSO and CARMENES. GJ 1002 was observed by CARMENES between 2017 and 2019, and by ESPRESSO between 2019 and 2021.

“Because of its low temperature the visible light from GJ 1002 is too faint to measure its variations in velocity with the majority of spectrographs,” says says Ignasi Ribas, researcher at the Institute of Space Sciences (ICE-CSIC) and director of the Institut d’Estudis Espacials de Catalunya (IEEC).

CARMENES has a sensitivity over a wide range of near infrared wavelengths which is superior to those of other spectrographs aimed at detecting variations in the velocities of stars, and this allowed it to study GJ 1002, from the 3.5m telescope at Calar Alto observatory.

The combination of ESPRESSO, and the light gathering power of the VLT 8m telescopes at ESO allowed measurements to be made with an accuracy of only 30 cm/sec, not attainable with any other instrument in the world.

“Either of the two groups would have had many difficulties if they had tackled this work independently. Jointly we have been able to get much further than we would have done acting independently,” states Suárez Mascareño.