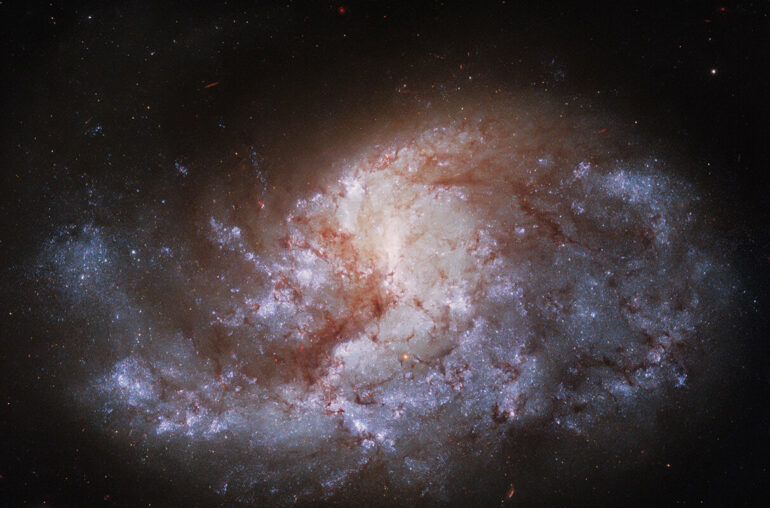 Intermediate-mass black holes are notoriously hard to find but a new study indicates there may be some at the center of dense, star clusters located throughout the universe.

The study, published today in the Astrophysical Journal, sheds new light on when and where black holes of about 100-100,000 solar masses could form and how they came into being.

“One of the biggest open questions in black hole astrophysics right now is how do black holes form that are between the size of a stellar mass black hole and a supermassive black hole,” said Vivienne Baldassare, lead author of the study and an assistant professor of physics and astronomy at Washington State University. “Most of the theories for their formation rely on conditions that are found only in the very early universe. We wanted to test another theory that says they can form throughout cosmic time in these really dense star clusters.”

For decades, astronomers have detected smaller black holes equal in mass either to a few suns or giant black holes with mass similar to millions of suns but the missing-link of black holes in between those sizes have eluded discovery.

The existence of these intermediate-sized or massive black holes has long been theorized but finding them has proven difficult as the light emitted by objects falling into them is not easy to detect.

To address this challenge, the research team used the Chandra X-Ray Observatory, the world’s most powerful X-ray telescope, to look for X-ray signatures of black holes in nuclear star clusters in 108 different galaxies.

“Chandra is basically the only instrument in the world that is able to do this kind of work,” Baldassare said. “It is able to pinpoint the locations of X-ray sources very precisely, which is important when you are looking for black hole signatures in these very compact nuclear star clusters.”

Baldassare and colleagues’ analysis showed that nuclear star clusters that were above a certain mass and density threshold emitted the X-ray signatures indicative of a black hole at twice the rate of those below the threshold. Their work provides the first observational evidence supporting the theory that intermediate-sized black holes can form in nuclear star clusters.

“Basically, it means that star clusters that are sufficiently massive and compact should be able to form a blackhole,” Baldassare said. “It is exciting because we expect many of these black holes to be in the intermediate mass regime between supermassive black holes and stellar mass black holes where there is very little evidence for their existence.”

The research team’s work not only suggests that intermediate-sized black holes can form in nuclear star clusters but also provides a mechanism by which they could potentially form throughout cosmic time rather than just during the first few billion years of the universe.

“One of the prevailing theories out there is that massive black holes could only have formed during the early universe when things were more dense,” Baldassare said. “Our research is more consistent with the picture where massive blackholes don’t need to form in the very early universe but could rather continue to form throughout cosmic time in these particular environments.”

Moving forward, the researchers plan to continue using Chandra to collect X-ray measurements of nuclear star clusters with the ultimate goal of learning more about the specific conditions where massive black holes can form.