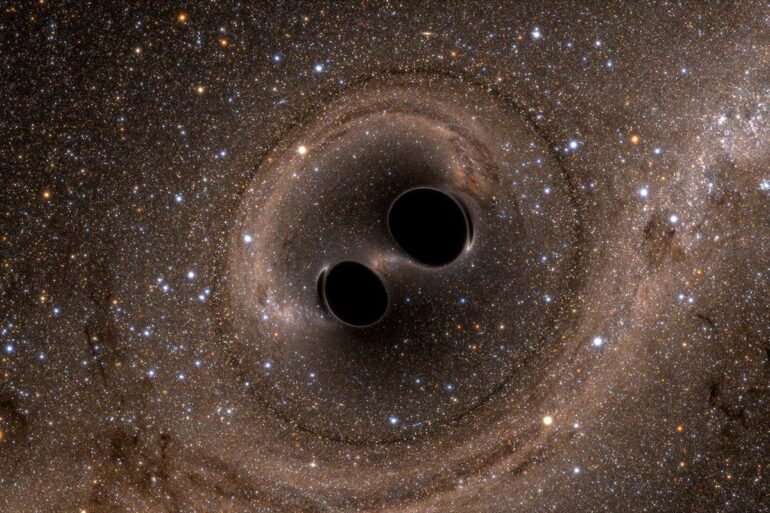 Since 2015, the LIGO-Virgo-KAGRA Collaboration have detected about 85 pairs of black holes crashing into each other. We now know that Einstein was right: gravitational waves are generated by these systems as they inspiral around each other, distorting space-time with their colossal masses as they go. We also know that these cosmic crashes happen frequently: as detector sensitivity improves, we are expecting to sense these events on a near-daily basis in the next observing run, starting in 2023. What we do not know—yet—is what causes these collisions to happen.

Black holes form when massive stars die. Typically, this death is violent, an extreme burst of energy that would either destroy or push away nearby objects. It is therefore difficult to form two black holes that are close enough together to merge within the age of the universe. One way to get them to merge is to push them together within densely populated environments, like the centers of star clusters.

In star clusters, black holes that start out very far apart can be pushed together via two mechanisms. First, there’s mass segregation, which leads the most massive objects to sink toward the middle of the gravitational potential well. This means that any black holes dispersed throughout the cluster should wind up in the middle, forming an invisible “dark core.” Second, there are dynamical interactions. If two black holes pair up in the cluster, their interactions can be influenced by the gravitational influence of nearby objects. These influences can remove orbital energy from the binary and push it closer together.

The mass segregation and dynamical interactions that can take place in star clusters can leave their fingerprints on the properties of merging binaries. One key property is the shape of the binary’s orbit just before it merged. Since mergers in star clusters can happen very quickly, the orbital shapes can be quite elongated—less like the calm, sedate circle that the Earth traces around the sun, and more like the squished ellipse that Halley’s Comet races along in its visits in and out of the solar system. When two black holes are in such an elongated orbit, their gravitational wave signal has characteristic modulations, and can be studied for clues to where the two objects met.

A team of OzGrav researchers and alumni are working together to study the orbital shapes of black hole binaries. The group, led by Dr. Isobel Romero-Shaw (formerly of Monash University, now based at the University of Cambridge) together with Professors Paul Lasky and Eric Thrane of Monash University, have found that some of the binaries observed by the LIGO-Virgo-KAGRA collaboration are indeed likely to have elongated orbits, indicating that they may have collided in a densely populated star cluster. Their findings indicate that a large chunk of the observed binary black hole collisions—at least 35%—could have been forged in star clusters.

“I like to think of black hole binaries like dance partners,” explains Dr. Romero-Shaw. “When a pair of black holes evolve together in isolation, they’re like a couple performing a slow waltz alone in the ballroom. It’s very controlled and careful; beautiful, but nothing unexpected. Contrasting to that is the carnival-style atmosphere inside a star cluster, where you might get lots of different dances happening simultaneously; big and small dance groups, freestyle, and lots of surprises.” While the results of the study cannot tell us—yet—exactly where the observed black hole binaries are merging, they do suggest that black hole carnivals in the centers of star clusters could be an important contribution.

Provided by
ARC Centre of Excellence for Gravitational Wave Discovery