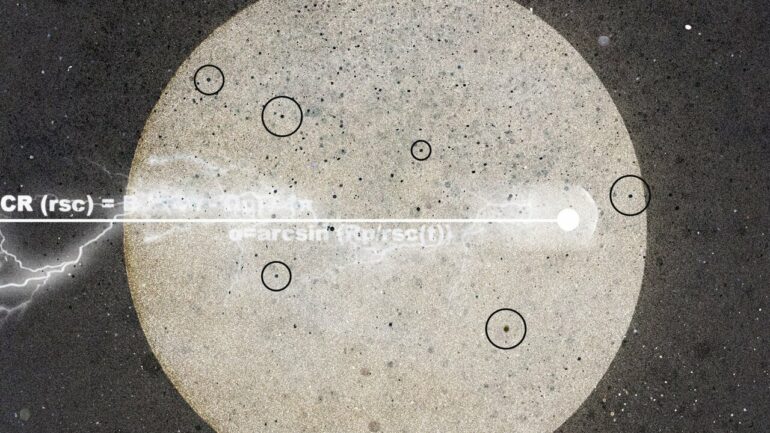 Measurements by ESA’s long-serving twin missions, Mars Express and Venus Express, have captured the dance between the intensity of high-energy cosmic rays and the influence of the sun’s activity across our inner solar system.

A comparison of data from the ASPERA plasma sensor, an instrument carried by both spacecraft, with the number of sunspots visible on the surface of the sun shows how cosmic ray counts are suppressed during peaks of activity in the 11-year solar cycle. The international study, led by Dr. Yoshifumi Futaana of the Swedish Institute of Space Physics, has been published today in the The Astrophysical Journal.

Cosmic rays are particles traveling at almost the speed of light that originate outside our solar system. They are a dangerous form of high energy radiation that can cause electronic failures in spacecraft and damage the DNA of humans in space.

As well as the decadal-long relationship with the solar cycle, the researchers also looked at how cosmic ray detections varied over the short timescales of an orbit. Surprisingly, they found that the area protected from cosmic rays behind Mars is more than 100 kilometers wider than the planet’s actual radius. The cause of why this blocked area should be so large is not yet clear.

“The study shows the range of valuable insights that can be derived from what is actually background count information collected by the ASPERA instruments. Understanding the various relationships between cosmic rays and the solar cycle, the atmospheres of planets and the performance of spacecraft instrumentation is very important for future robotic missions and human exploration,” said Dr. Futaana.

Launched in 2003, Mars Express remains in service around the Red Planet, while Venus Express operated from 2006 until 2014. The researchers compared the 17-year dataset from Mars and eight-year dataset from Venus with Earth-based cosmic ray measurements from the Thule neutron monitor in Greenland. Scientists took median value of cosmic ray counts over three-month periods to minimize the influence of sporadic solar activity, such as flares or coronal mass ejections. The databases of background radiation counts extracted for the study have been published and can be accessed through the Europlanet SPIDER planetary space weather service.

All the datasets showed a decrease in the number of cosmic ray detections as the peak in activity for Solar Cycle 24 was reached. In particular, the Mars Express data and the observations from Earth showed very similar features. However, there was an apparent lag of around nine months between the maximum number of sunspots and the minimum in cosmic ray detections at Mars.

“Previous studies have suggested that there is a delay of several months between solar activity and the behavior of cosmic rays at the Earth and at Mars. Our results appear to confirm this and also provide further evidence that Solar Cycle 24 was a bit unusual, perhaps due to the long solar minimum between Cycle 23 and 24, or the relatively low activity during Cycle 24,” said Dr. Futaana.

The analysis of the Venus Express data has been complicated by changes in the way onboard processing was carried out from 2010 onwards. In addition, while the ASPERA instruments carried by Mars Express and Venus Express were based on a common design, they were each tailored to the very different planetary environments in which they operated. This means that a direct comparison of cosmic ray fluxes at Mars and Venus is not possible using the available datasets.

“The use of background counts to study the interaction of cosmic rays and high energy particles with planetary missions is relatively new. However, obtaining this information shows potential as a powerful tool, for example, in protecting the upcoming JUpiter Icy moon Explorer (JUICE) mission of the European Space Agency, which will explore the harsh environment around Jupiter’s icy moons,” said Nicolas Andre of the Institut de Recherche en Astrophysique et Planétologie (IRAP) in Toulouse, France, coordinator of the Europlanet SPIDER service and co-author of this study.

Russian rocket blasts off carrying Japanese billionaire to the ISS