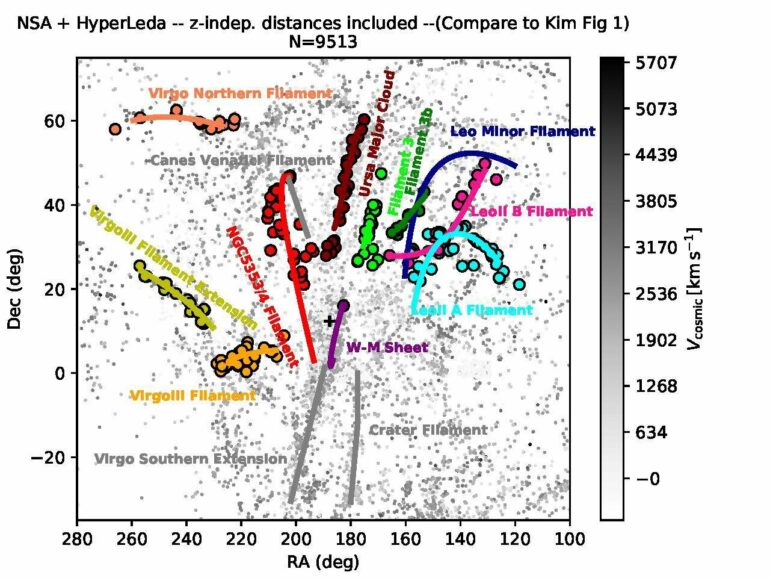 The shape of galaxies and how they evolve depend on a web of cosmological filaments that run across the universe. According to a recent study headed by EPFL’s Laboratory of Astrophysics, this cosmic web plays a much bigger role than previously thought.

Across the universe, galaxies are distributed along what’s called the cosmic web, a complex network of filaments made up of ordinary and dark matter. And where those filaments intersect, galaxy clusters—collections of hundreds or even thousands of galaxies bound to each other by the force of gravity—tend to form. They are the biggest and densest clusters in the universe and are the subject of much research by astrophysicists. But precisely how filaments contribute to galactic evolution is still poorly understood.

To get deeper insight, an international team of scientists led by Prof. Pascale Jablonka and Gianluca Castignani from EPFL’s Laboratory of Astrophysics (LASTRO) examined the vast environment surrounding Virgo, a representative cluster in the local universe. It contains some 1,500 galaxies and is located around 65 million light-years away from our own galaxy, the Milky Way. The team’s findings have been published in two articles: one appearing in Astronomy & Astrophysics this past January and the other in Astrophysical Journal last fall.

“Many properties of galaxies, like their morphology, gas content and star formation rate, are directly influenced by their environment,” says Jablonka. “We know that galaxies form fewer stars in very dense environments and adopt a more elliptical shape. But the exact role that filaments play in this transformation is still not clear. That’s what we wanted to investigate with our research.”

The scientists analyzed the properties of galaxies located around the Virgo cluster, across a region spanning 12 times the radius of the main cluster. Theirs is the largest study conducted to date on this topic and covers a sample size of some 7,000 galaxies, including 250 that are big enough for scientists to be able to precisely estimate their gas content—and especially the amount of cold, dense atomic hydrogen that stars are made out of. Measurements were taken using the decametric radio telescope in Nançay, France, and the IRAM-30m telescope in Pico Veleta, Spain.

By combining the new data they collected with measurements from the literature, the scientists found that the properties of galaxies—namely, their shape, star formation rate, gas content, and the age and metal content of their stars—clearly change as the galaxies progress from more isolated positions towards filaments and eventually into clusters.

Filaments therefore seem to serve as a transitional environment where galaxies are pre-processed before falling into a cluster. In this environment, star formation slows or even stops altogether, elliptical shapes appear more frequently, and there is less atomic and molecular hydrogen, indicating that the galaxies are reaching the end of their active life. The scientists observed that a galaxy’s evolution through its life cycle corresponds to the local galaxy density: galaxies producing few or no stars made up less than 20% of the sample of isolated galaxies, but they accounted for 20–60% of galaxies in the filaments and some 80% of galaxies in the Virgo cluster. These findings open up new avenues of research on theories to explain galaxy formation and how galaxies evolve in tandem with major cosmic bodies.