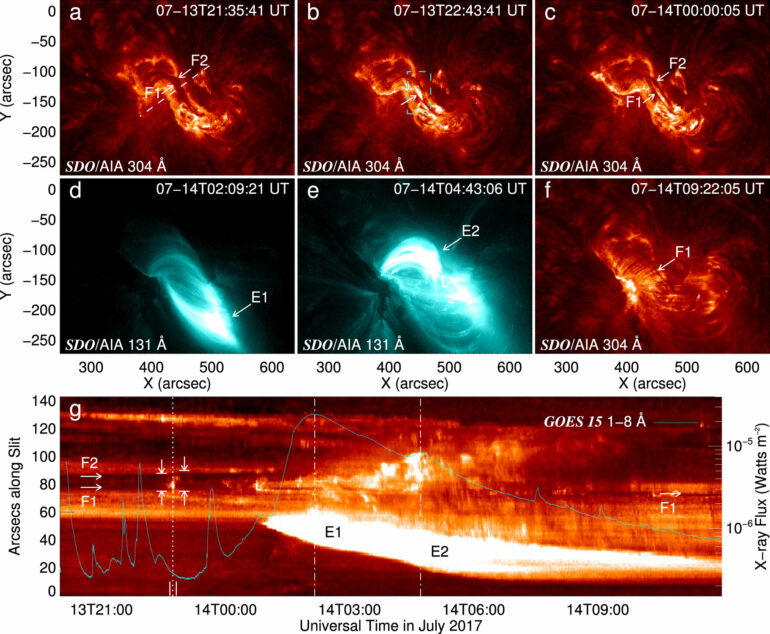 A filament is a darker and denser structure in the solar atmosphere. Doppler shifts of bidirectional outflows, as definite evidence for reconnection, have not been detected in solar filament splitting so far.

However, now, researchers led by Dr. Hu Huidong from the National Space Science Center of the Chinese Academy of Sciences, along with their collaborators from Max Planck Institute for Solar System Research in Germany and Nanjing University in China, have reported a magnetic-reconnection event that caused the splitting of a solar filament structure, based on spatially resolved spectroscopic data from the Interface Region Imaging Spectrograph (IRIS) and images from the Solar Dynamics Observatory (SDO).

The study was published in The Astrophysical Journal Letters.

“The filament structure was split into two upper and lower branches by magnetic reconnection, which eventually erupted partially, with the upper branch ejected and the lower branch retained,” said Dr. Hu.

Neighboring large blue- and redshifts (more than 50 km/s) of the Si IV line in the brightening region between the two filament branches were revealed, which spatially corresponded to large nonthermal widths and enhanced intensities of the Si IV line. These are clear signatures of magnetic reconnection. The length of the reconnection region is unprecedentedly no less than 14,000 km.

A double Gaussian fit of the line spectra illustrated blue- and redshifts (up to ~150 km/s) of the upward and downward outflows. The reduction of the overall line width indicated that the line-of-sight velocities decreased remarkably after the bidirectional outflows left the reconnection site. Line broadening on the blue wing several arcseconds away from the reconnection site was observed, which might be indicative of turbulence that was induced when the upward outflow interacted with the upper filament branch.

“Our study has provided definite spectroscopic evidence for the splitting of a filament structure by magnetic reconnection,” said Dr. Hu. “The reconnection is in an extended region with an unprecedented length, and the thermal energy overwhelmingly dominates the kinetic energy in this reconnection event.”