Detailed images of a shock wave that extends for 6.5 million light years 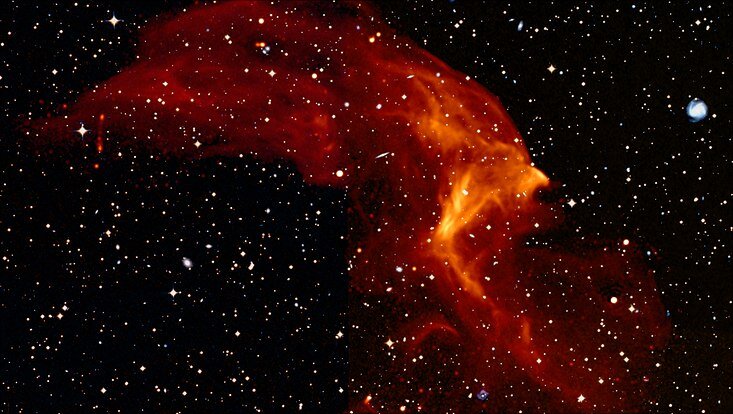 An international team of astronomers led by the Hamburg Observatory made the most detailed images of the largest cosmic shock waves ever observed. The observations are based on data from the MeerKAT radio telescope in South Africa and have been published in the journal Astronomy & Astrophysics.

When clusters of galaxies collide, gigantic cosmic shock waves are created that travel through the newly formed galaxy cluster. Now, an international group of astronomers led by Dr. Francesco de Gasperin, former Junior professor at Universität Hamburg and now Visiting Scientist at the Hamburg Observatory, has succeeded to produce images of the largest shock wave ever observed by using data from the MeerKAT radio telescope. The high-resolution images from the galaxy cluster Abell 3667 provide so far unique insights into the structure of cosmic shock waves.

“Cosmic shock waves are full of surprises and much more complex than we initially thought,” says Francesco de Gasperin and explains: “The shock waves act as giant particle accelerators and accelerate electrons almost to the speed of light. When these fast electrons cross a magnetic field, they emit long-wave radiation that can be observed with the help of radio telescopes. The shock waves are threaded by an intricate pattern of bright filaments that trace the location of giant magnetic field lines and the regions where electrons are accelerated.”

One of the key research areas at the Hamburg Obervatory is the study of galaxy clusters. The cluster Abell 3667 can be observed particularly well with the MeerKAT radio telescope in the southern hemisphere because it is comparatively close to the Earth. Abell 3667 was formed a billion years ago, but what scientists are measuring today took place about 800 million years ago. At that time, the shock waves propagated at 1500 kilometers per second and were about 60 times the size of our Milky Way.