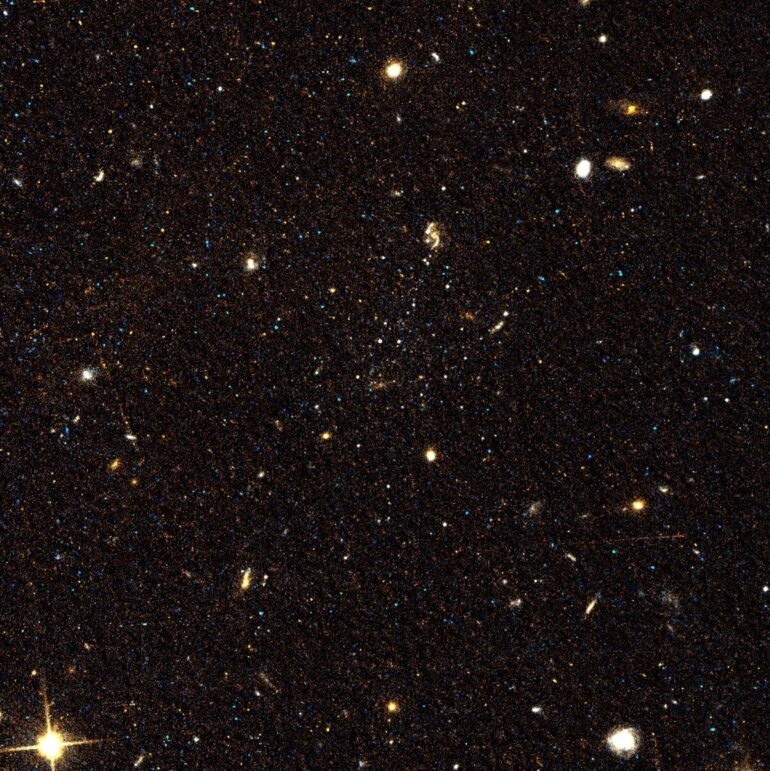 The discovery of the faintest known galaxies beyond the neighborhood of the Milky Way could help scientists develop universal models for how the universe’s oldest galaxies formed, according to findings announced Jan. 11 at the 241st meeting of the American Astronomical Society.

A team of researchers led by Burçin Mutlu-Pakdil, now an assistant professor of physics and astronomy at Dartmouth College, identified three ultra-faint dwarf galaxies (UFDs) that are among the faintest galaxies discovered outside of the Local Group, the clustering of galaxies that includes the Milky Way and Andromeda.

Located roughly 11.4 million light years from Earth, the galaxies are estimated to be 12 billion years old, with nearly all their stars having formed in the early universe, the researchers reported in The Astrophysical Journal.

The galaxies are the first UFDs to be found around a spiral galaxy with a mass of the Milky Way, orbiting a galaxy known as NGC253, or the Sculptor Galaxy. Yet, their characteristics are consistent with UFDs within the Local Group, which could help scientists develop more accurate models of UFDs overall. Most known examples of UFDs are within the Local Group, but different environments can affect their formation and evolution, Mutlu-Pakdil said.

“Our work is the necessary first step toward further understanding the faintest galaxies beyond the Local Group, and toward more robustly constraining the demographics of ultra-faint dwarf galaxies,” Mutlu-Pakdil said. “We still do not know whether the Local Group UFDs are typical or unusual. To answer this fundamental question, we need to discover more UFDs beyond our local environment and study them in detail.”

UFDs are the least luminous and least chemically evolved galaxies known. Yet, they are the most dominated by dark matter, which is the mysterious form of matter thought to constitute most of the universe. For these reasons, astronomers consider UFDs to be pristine fossils of the early universe that could provide the best opportunities for studying the composition of the universe and the formation of its first galaxies.

“Dwarf galaxies are the building blocks of larger galaxies,” Mutlu-Pakdil said. “UFDs are the best place to study galaxy formation on the smallest scales and learn how the smallest dark matter clumps get populated with stars and turn into galaxies.”

The paper, “Hubble Space Telescope Observations of NGC 253 Dwarf Satellites: Three Ultra-faint Dwarf Galaxies,” was published by The Astrophysical Journal. This study was conducted as part of the Panoramic Imaging Survey of Centaurus and Sculptor (PISCeS) project, which is a Magellan+Megacam survey aimed at finding new faint satellite galaxies, including UFDs.

All systems go for Artemis 1 mission to Moon