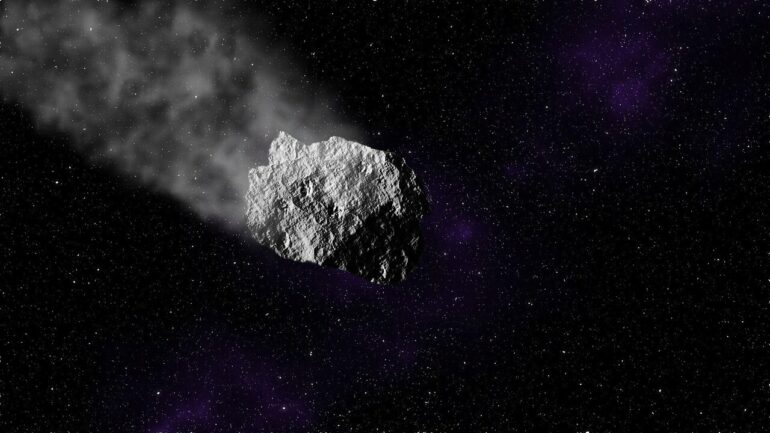 NASA’s latest launch into outer space is going to make an impact. In fact, that’s its entire mission.

DART (Double Asteroid Redirection Test), which is scheduled to launch at 10:20 p.m. PST on Nov. 23 out of Vandenberg Air Force Base in California, is NASA’s first planetary defense mission. This mission will demonstrate asteroid deflection via kinetic impact. The goal is to collide with the target to see how the orbit changes. It’s a test run to see if such a plan is feasible should we find an asteroid on a collision course with Earth one day.

Cristina Thomas, an assistant professor of astronomy and planetary sciences at Northern Arizona University and lead of the DART Observations Working Group, is excited to see the effects of the impact. She and her international team have been working for years to obtain a precise pre-impact orbit of Dimorphos, the satellite asteroid, around Didymos, the primary asteroid in a near-Earth asteroid system.

Near-Earth, of course, is relative; the planet is in no danger from Didymos. However, an asteroid heading toward Earth is possible, and scientists throughout the world are working on ways to identify these potential threats and how to mitigate them. If this mission goes according to plan, this technique, called kinetic impact deflection, could be an important piece of a planetary defense system.

“DART is a critical next step for planetary defense,” Thomas said. “It is, on the surface, a simple test, but we will not completely understand what will happen until we do it.”

Using data from 2003, when the satellite was discovered, through early 2021, the working group has been able to precisely constrain the characteristics of the orbit and the position of Dimorphos in the orbit at the time of impact in fall 2022. They take repeated images of the same object, which shows dips in brightness when the satellite passes in front of or behind the primary. The timing of these brightness dips, called mutual events, allows the scientists to determine the orbital period of the satellite.

“This is essentially thinking of the satellite Dimorphos as a clock, which will return to its position in front of or behind Didymos at consistent intervals,” Thomas said. “Our working group will begin observations again in the months prior to the DART impact. We want to have the most complete picture of the current orbit before we change it through impact.”

Thomas will be in California for the launch, and she and her team will continue to do observations after the collision to determine the change in the orbital period caused by the spacecraft’s impact.

NASA’s Double Asteroid Redirection Test is the world’s first full-scale planetary defense test, demonstrating one method of asteroid deflection technology. DART is a focused mission, proving that a spacecraft can autonomously navigate to a target asteroid and intentionally collide with it (called a kinetic impact) at roughly 4 miles per second (6 kilometers per second). Its target is the asteroid moonlet Dimorphos (Greek for “two forms”), which orbits a larger asteroid named Didymos (Greek for “twin”). As part of NASA’s larger planetary defense strategy, DART will simultaneously test new technologies and provide important data to enhance modeling and predictive capabilities and help scientists better prepare for an asteroid that might pose a threat to Earth, should one be discovered.