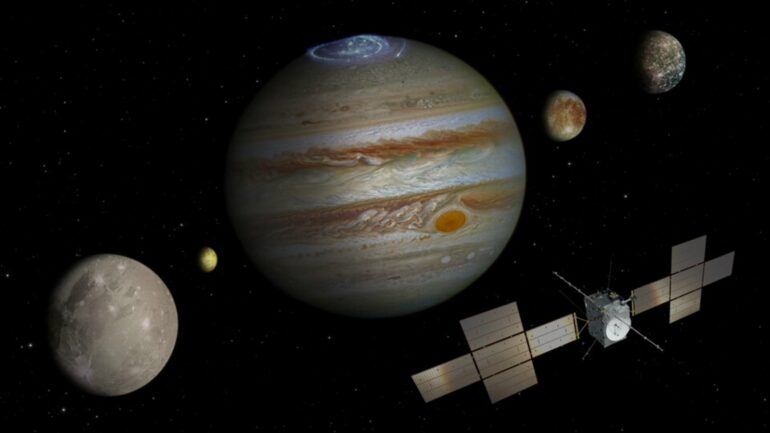 Europe’s JUICE spacecraft is all ready to embark on an eight-year odyssey through the Solar System to find out whether the oceans hidden under the surface of Jupiter’s icy moons have the potential to host extraterrestrial life.

For now, the Jupiter Icy Moons Explorer (JUICE) is in a white room of its manufacturer Airbus in the southwestern French city of Toulouse. But its days on this planet are numbered.

Soon the spacecraft will be put in a container, wings carefully folded away, ahead of traveling to Europe’s spaceport in Kourou, French Guiana off the coast of South America in early February.

From there, one of Europe’s most ambitious space missions ever is scheduled to launch in April.

The scientists and engineers in Toulouse who have spent years working on the project are clearly emotional at the thought of saying goodbye to what they call “the beast”.

They finally unveiled the six-ton spacecraft to journalists on Friday—showing off its 10 scientific instruments, antenna 2.5 meters (eight feet) in diameter for communicating with Earth, and vast array of solar panels which still need to be tested one last time.

As a parting gift, a commemorative plaque was mounted on the back of the spacecraft in tribute to Italian astronomer Galileo Galilei, who was the first to spot Jupiter and its largest moons in 1610.

Volcanic Io and its icy siblings Europa, Ganymede and Callisto were “the first moons discovered outside of our own,” said Cyril Cavel, the Airbus project manager for JUICE.

Cavel carried a copy of Galileo’s “Sidereus Nuncius”, the first treatise based on observations made through a telescope.

More than 400 years later, JUICE will give a far clearer image of Europa, Ganymede and Callisto, before becoming the first spacecraft to orbit around one of Jupiter’s moons.

It will be the first European space mission that ventures into the outer solar system, which begins beyond Mars.

Jupiter is more than 600 million kilometers (370 million miles) from Earth and JUICE will take a circuitous path before its scheduled arrival in July 2031.

The spacecraft will travel a total of two billion kilometers, using the gravity of Earth—then Venus—for a boost along the way.

“It’s like a catapult that gives us momentum to Jupiter,” said Nicolas Altobelli, JUICE project scientist at the European Space Agency (ESA).

The extra travel time will allow JUICE’s solar panels—which cover an area of 85 square meters, the largest ever built for an interplanetary spacecraft—to soak up as much power as possible.

It will need that power once it crosses the “frost line” between Mars and Jupiter, when temperatures could drop to minus 220 degrees Celsius.

Then JUICE will need to carefully hit the brakes so it can slip into Jupiter’s orbit. For that part, it’s on its own.

“We will follow the maneuver from Earth without being able to do anything—if it fails, the mission is lost,” Cavel said.

From Jupiter’s orbit, the satellite will make 35 flybys of Europa, Ganymede and Callisto. Then it will enter the orbit of Ganymede, the largest of the three, before eventually falling to its surface.

Not looking for ‘big fish’

JUICE’s ice-penetrating cameras, sensors, spectrometers and radars will probe the moons to determine whether they could be habitable to past or present life.

It will not be looking at the frozen surface of the moons but 10-15 kilometers below, where vast liquid oceans flow.

Among thousands of known exoplanets, astronomers flag three that are actually stars

This extreme environment could be home to bacteria and single-celled organisms.

But the mission will not be able to detect “big fish, or creatures,” ESA director-general Josef Aschbacher said.

Instead it will look for conditions capable of supporting life, including liquid water and a source of energy, which could come from the tidal effect Jupiter’s gravity has on its moons.

Measuring magnetic signals could determine whether water on Ganymede is in contact with its rocky core, which would allow chemical elements necessary for life “to be dissolved into the water,” Altobelli said.

NASA’s Clipper mission is planned to launch in 2024 on its own quest to study Europa.

If one of the moons prove to be a particularly good candidate to host life, the “logical next step” would be to send a spacecraft to land on the surface, Cavel said.

He added that he was moved at the thought that JUICE “will end its life on the surface of Ganymede”.