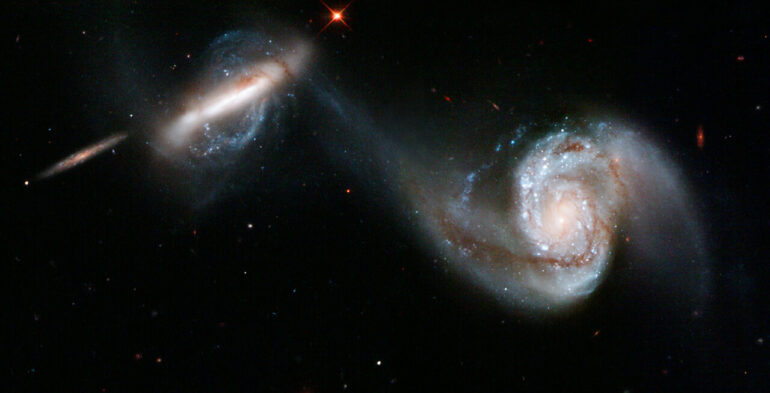 Research led by the University of Southampton has revealed how supermassive black holes (SMBHs) are feeding off gas clouds which reach them by traveling hundreds of thousands of light years from one galaxy to another.

An international team of scientists has shown there is a crucial link between the interaction of neighboring galaxies and the enormous amount of gas needed to ‘fuel’ these giant, super-dense, space phenomena. Their findings are due to be published in Nature Astronomy.

A black hole can be created when a star collapses, squeezing matter into a relatively tiny space. This increases the force of gravity to a point where nothing can escape, not even light—hence the name.

Some black holes are gigantic, with masses millions of times greater than our sun, emitting enormous amounts of energy. These are known as ‘supermassive black holes’ and exactly how they are formed or gain enough fuel to power themselves is still a mystery.

Astrophysicist and lead researcher from the University of Southampton, Dr. Sandra Raimundo, says, “Supermassive black holes fuel their activity by, in part, the gradual accumulation of gas from the environment around them. Supermassive black holes can make the centers of galaxies shine very brightly when they capture gas and it’s thought this process can be a major influence on the way that galaxies look today. How SMBHs get enough fuel to sustain their activity and growth still puzzles astronomers, but the work we have carried out provides a step towards understanding this.”

The Southampton scientist, working with researchers at the universities of Copenhagen and California, used data from the 4-meter Anglo-Australian telescope in New South Wales, Australia to study the orbits of gas and stars in a large sample of more than 3000 galaxies. They identified those with the presence of what is known as ‘misaligned’ gas—in other words, gas which rotates in a different direction from the stars in the galaxy, signaling a past galaxy interaction. They then found that galaxies with misaligned gas had a higher fraction of active supermassive black holes.

The results showed a clear link between misaligned gas and supermassive black hole activity—suggesting the gas is transferred where two galaxies meet, meanders vast distances through space and then succumbs to the huge gravitational forces of the supermassive black hole—pulled in and swallowed up as a vital source of fuel. Astronomers have long suspected that a merger with another galaxy could provide this source of gas, but direct evidence for this has been elusive.

“This is the first time that a direct connection has been observed between the formation and presence of misaligned gas and the fueling of active supermassive black holes.”

Dr. Marianne Vestergaard, a co-author in the study, says, “What is exciting about these observations is that we can now, for the very first time, identify the captured gas and trace it all the way to the center where the black hole is devouring it.”

Clusters of galaxies easier to view with radio X-ray combination

The scientists now hope to extend their research and use their findings to calculate how much of the total mass of supermassive black holes grew from this mechanism and how important this was in the early universe.