How was the solar system formed? The Ryugu asteroid is helping us learn 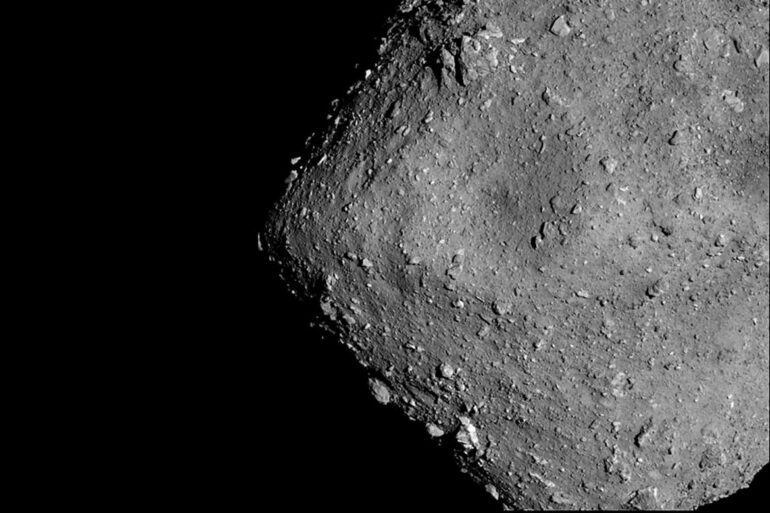 Mineral samples collected from the Ryugu asteroid by the Japan’s Hayabusa2 spacecraft are helping UCLA space scientists and colleagues better understand the chemical composition of our solar system as it existed in its infancy, more than 4.5 billion years ago.

In research recently published in Nature Astronomy, scientists using isotopic analysis discovered that carbonate minerals from the asteroid were crystallized through reactions with water, which originally accreted to the asteroid as ice in the still-forming solar system, then warmed into liquid. These carbonates, they say, formed very early on—within the first 1.8 million years of the solar system’s existence—and they preserve a record of the temperature and composition of the asteroid’s aqueous fluid as it existed at that time.

The rocky, carbon-rich Ryugu is the first C-type (C stands for “carbonaceous”) asteroid from which samples have been gathered and studied, said study co-author Kevin McKeegan, a distinguished professor of Earth, planetary and space sciences at UCLA. What makes Ryugu special, he noted, is that unlike meteorites, it has not had potentially contaminating contact with Earth. By analyzing the chemical fingerprints in the samples, scientists can develop a picture of not only how Ryugu formed but where.

“The Ryugu samples tell us that the asteroid and similar objects formed relatively rapidly in the outer solar system, beyond the condensation fronts of water and carbon dioxide ices, probably as small bodies,” McKeegan said.

The researchers’ analysis determined that Ryugu’s carbonates formed several million years earlier than previously thought, and they indicate that Ryugu—or a progenitor asteroid from which it may have broken off—accreted as a relatively small object, probably less than 20 kilometers (12.5 miles) in diameter.

This result is surprising, McKeegan said, because most models of asteroid accretion would predict assembly over longer periods, resulting in the formation of bodies at least 50 kilometers (more than 30 miles) in diameter that could better survive collisional evolution over the long history of the solar system.

And while Ryugu is currently only about 1 kilometer in diameter as a result of collisions and reassembly throughout its history, it is very unlikely it was ever a large asteroid, the researchers said. They noted that any larger asteroid formed very early on in the solar system would have been heated to high temperatures by the decay of large amounts of aluminum-26, a radioactive nuclide, resulting in the melting of rock throughout the asteroid’s interior, along with chemical differentiation, such as the segregation of metal and silicate.

Ryugu shows no evidence of that, and its chemical and mineralogical compositions are equivalent to those found in the most chemically primitive meteorites, the so-called CI chondrites, which are also thought to have formed in the outer solar system.

McKeegan said ongoing research on the Ryugu materials will continue to open a window onto the formation of the solar system’s planets, including Earth.

“Improving our understanding of volatile- and carbon-rich asteroids helps us address important questions in astrobiology—for example, the likelihood that rocky planets like can access a source of prebiotic materials,” he said.

To date the carbonates in the Ryugu samples, the team extended methodology developed at UCLA for a different “short-lived” radioactive decay system involving the isotope manganese-53, which was present Ryugu.

The study was co-led by Kaitlyn McCain, a UCLA doctoral student at the time of the research who now works at NASA’s Johnson Space Center in Houston, and postdoctoral researcher Nozomi Matsuda, who works in the ion microprobe laboratory of the UCLA’s Department of Earth, Planetary and Space Sciences.

Zooming into the sun with Solar Orbiter

Other co-authors of the paper are scientists from the Phase 2 curation Kochi team in Japan, led by Motoo Ito. This team is responsible for curating particles from the regolith sample collected from the Ryugu asteroid and analyzing their petrological and chemical characteristics by coordinated microanalytical techniques.


Citation:
How was the solar system formed? The Ryugu asteroid is helping us learn (2023, January 18)